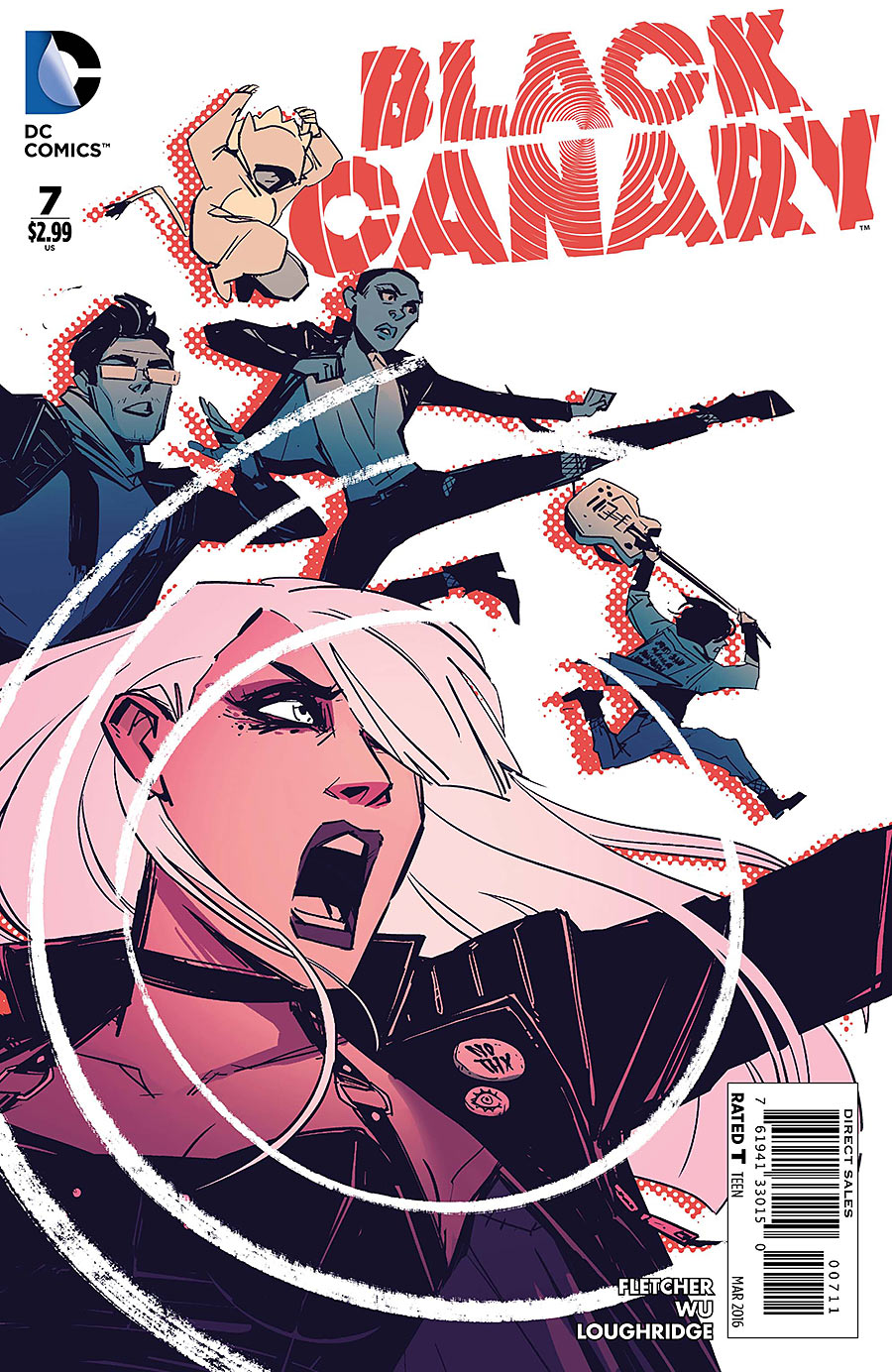 Things get truly cosmic in the arc finale, which, as tragic as it is, is also the perfect time for a tribute to the recently departed David Bowie.

Fittingly, the issue opens with a montage that defines sound as life and silence as entropy, using vibration to build its case. The idea goes back to the concept of Musica Universalis, popularly referred to as “the music of the spheres.” Put simply, it’s the philosophy of there being a harmony to the cosmos that doesn’t manifest itself as literal music, but it hasn’t stopped anyone from trying to bridge that gap going back at least to Plato, as put down in Republic:

“As the eyes, said I, seem formed for studying astronomy, so to do the ears seem formed for harmonious motions: and these seem to be twin sciences to one another, as also the Pythagoreans say.”

Harmony, made most explicit across the last two issues, has been at the core of the arc in just about any way you can think to name — whether it’s the band figuring out how to work together, the frequencies that Dinah and Bo Maeve’s cries work on, or the individual roles that Brenden Fletcher, Annie Wu, Lee Loughridge, and Steve Wands have in creating the finished product. While there’s a few, mostly quite good, comics about rock bands which are almost all shipping this week (IDW’s Jem and The Holograms and Vertigo’s Last Gang in Town), Black Canary is the only one that is fundamentally about music, and even more fundamentally, sound.

When Kurt and Ditto melted into a puddle at the apex of the battle of the bands last issue, she took him outside space and time in what reads like an abbreviated version of Grant Morrison’s alien abduction experience. When they returned, much earlier in time than they’d left, Kurt set about creating the circumstances leading to this moment, including Bo Maeve getting a canary cry of her own and sending the previous version of himself on that trip. Ditto is sentient sound given physical form and she is unique among her kind for being able to form stable matter.

So naturally they’ve sent a giant monster that eats sound, The Quietus, to destroy her and we find ourselves in a pitched battle for the fate of the world — pitting the forces of creation and entropy against each other — at a rock concert. If this seems at all familiar, it’s because Grayson ended its first major arc in a similar way, with an evil brain vibrating at a frequency meant to collapse the world into violent chaos.

It’s an idea that traces its roots at least as far back as the Illuminatus! Trilogy, which in turn was a critical influence on Grant Morrison’s The Invisibles. But what’s most intriguing here is that when Seeley and King executed it in Grayson, it hinged on Dick putting his faith in Midnighter, who had been a rival, if not outright antagonist up to that point. This time, defeating The Quietus similarly rests on Dinah being able to achieve harmony with Bo Maeve. (There’s points of comparison to be made here with Olive Silverlock and Pomeline Fritch putting their differences aside at the close of the first arc of Gotham Academy, as well.)

David Bowie’s passing is a particularly opportune time to reflect on creative influences and homage, given the gigantic shadow he’s left on pop culture. His death brought out mourning by many people, public figures inclusive, whose engagement with his work and legacy aren’t immediately palpable, which far from being disingenuous, is a testament to his cultural reach.

When it sunk in for me that it was more than just a social media hoax, the first song I could think to play was I’m Afraid of Americans, notable for being produced by Trent Reznor, who appears as Bowie’s stalker in the accompanying video. What struck me in the moment is that all of my most cherished Bowie songs are covers by other artists. Golden Years as sung by Marilyn Manson, Beck’s cover of Diamond Dogs for Moulin Rouge, and most hauntingly, the Nirvana rendition of The Man Who Sold The World released years after Kurt Cobain’s passing.

When done right, homage and the flexing of one’s creative influences illuminates what that work means to you and forwards it in a way tailored to your particular audience. Beck and Manson, for example, were particularly adept at highlighting the gothic undertones of Bowie’s songs about fame and glamour, drawing out allusions to the paranoia and isolation that marked the nadir of Bowie’s cocaine addiction.

But Bowie himself was equally adept at bringing out the fullness of his influences and drawing his listeners back into what inspired him. I can keenly recall an episode of Luther in which Idris Elba, as the eponymous police inspector, lays the evidence in the case he’s trying to crack out in a different way, describing it as inspired by the cut up method that Bowie used in his lyrics. I laughed pretty sharply at the time because I hadn’t known that about Bowie, but also because I recognized it as being pioneered by Brion Gysin and William S. Burroughs, having come to it myself through Grant Morrison.

For the most part, we’ve already seen the dissolution of binary opposites into a synthesis carried out to its peak last issue in the overlapping of the canary cries primarily driven by Loughridge’s colors, but this is where it takes hold in a more concrete sense as the band, at least temporarily, reconciles with Maeve. It serves to prove just what achieving harmony can do, which is literally save the world.

It’s been about a decade since Morrison’s influence really started to be felt by incoming creators like Mike Carey, Jason Aaron, Matt Fraction, and Kieron Gillen, and what we’ve started to see at DC within the last year is creators who are going beyond tapping into the wild ideas and influences he brought to the forefront (many of them the same gnostic and occult influences that drove Bowie). Batman, Grayson, Gotham Academy, and Black Canary have all taken at least some piece of a lofty Morrison idea and made it more concrete and immediately accessible than he ever has. I saw in passing a quote that summed up Bowie as having gone from a songwriter of catchy pop songs to a writer of catchy pop songs who had read a book on gnosticism, which is also the genius of Black Canary.

That’s the beauty of the maze of pop and how it can lead the properly inquisitive down the same roads to very different effect. Were Bowie still with us, I would have contemplated this issue almost purely through the lens of the themes of gnosticism, shamanism, and neo-Platonism that Grant Morrison transformed into common currency, but the dedication that just barely made it in before the issue went off to the printers opens up a brand new tributary that ultimately leads back to the same sea. That Ditto has the unique ability to transform sound into solid matter recalls precisely how the Black Canary team translate their musical influences onto the page and deal with the concept of sound in a purely visual medium.

Last issue, we saw it in a fret chart superimposed over one of Maeve’s band members with the notes themselves represented by the punches Dinah was throwing her way. This issue, it gets even more explicit as her battle against The Quietus sheds the comics page to play out across sheet music, which they stretch and ultimately break in a way that recalls Ultra-Man trying to break out of the page and into our reality in Animal Man.

Morrison’s more metafictionally engaged work, whether it’s Zatanna reaching out of the page or his conversation with Buddy, tend to elicit an attitude of superiority when the suspension of disbelief lapses, that we’re higher dimensional being peering into a lesser world ruled by our imaginations. What the sheet music sequence does, beyond looking really cool, is reverse that dynamic.

We’re told by Kurt in the opening pages of the issue, as we see the intimacy across time between him and Dinah is anchored by a violin, that a world without sound is the darkest dystopia imaginable. That The Quietus and the silence it brings is just as much an embodiment of entropy as Darkseid and his Anti-Life equation. It’s an incredibly jarring statement because to us reading, comics are a silent medium. Seen in that light, we’re experiencing the story as Kurt’s deepest nightmare. Instead of being omniscient beings who tower over their tiny two dimensional world, we’re observers from behind soundproof glass who can never hope to capture the full experience of it, which embodies the existential angst of Gnosticism and the incompleteness of the material world better than I’ve ever seen it put down on a comics page before.

Of course that isn’t strictly true, since we have our imaginations to fill in everything from the sound of his voice to a canary cry or Ditto’s strumming, but it does sharply highlight the scope of the threat that The Quietus poses. The death of sound, to Kurt, is the death of imagination, which to him is the beginning of creation. So the revelation of Ditto’s nature is also the revelation of what the comic has been about and how it’s created. Turning sound into matter. Making it matter. Ha.