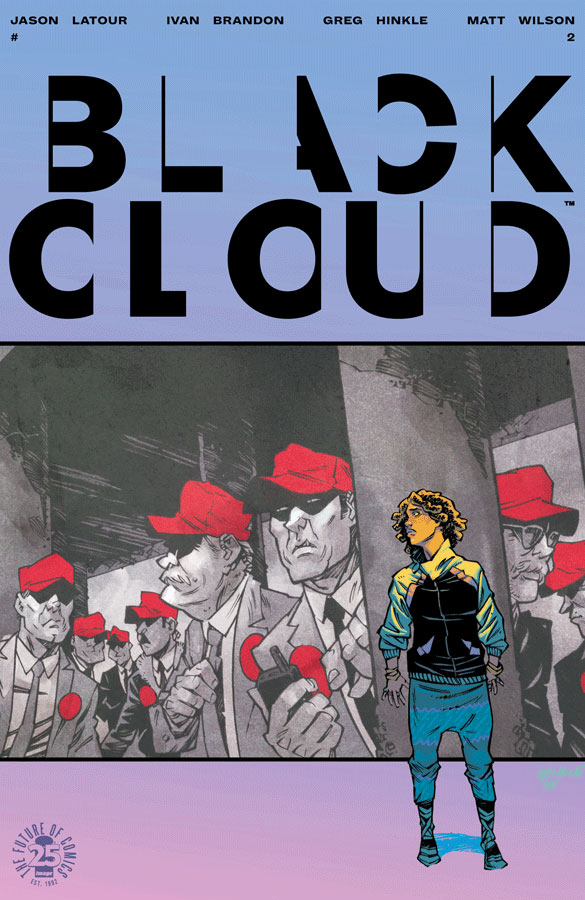 As ominous forces encroach, Zelda is forced leave behind Todd in order to save herself. Zelda flees back to our world, finding time to recuperate and reassess her situation in this dark issue of Black Cloud!

Latour and Brandon have created a complex character in Zelda Barrett. Extremely flawed and broken from her fallen aspirations and desperation for survival in a world that rejects her, Zelda has blimps of heroism left from her time before her demise. The more you learn about her, the less sympathetic she seems, even if her plight was one of freedom and, at its core, an important fight. I find that combination makes her intriguing and makes me wonder if she’s been set up for a path towards redemption. It draws me in, makes me want to read more about her.

Hinkle’s art is magnificent. While our own world feels dull and uneventful, the land where Zelda hails is one of wonder and imagination. All may not be as it seems in that world, but even the creations of the old-fathers seem captivating, this cluster of mismatched architecture and styles that obnoxiously takes up a landscape. I feel my favorite piece of Hinkle’s art is the panel that reveals the beautiful grass under the imagined creation of a stony path. There’s something almost Seussian about it, some twisted version of a cartoon gone awry.

The coloring Wilson does is extremely important to this work. The almost dull palette of our world seems dazzling compared to the gray scale the present day homeland of Zelda looks like. However, the past of her world seems to be an extravagant explosion of hues, creating a land almost too good to be true. It makes you wonder what happen to make such a bubblegum color-filled world turn black and white. Without those choices in color, the differences between the worlds would not be as impactful.

I recommend this comic. Black Clouds keeps the reader on its toes, only feeding spoonfuls of information about the other world and the magic that encompasses a certain few people from that world. Zelda, while not exactly the most sympathetic character, does feel well rounded and is an individual who draws you in and makes you want to know more about her. It’s a great comic and I can’t wait to read the next issue.