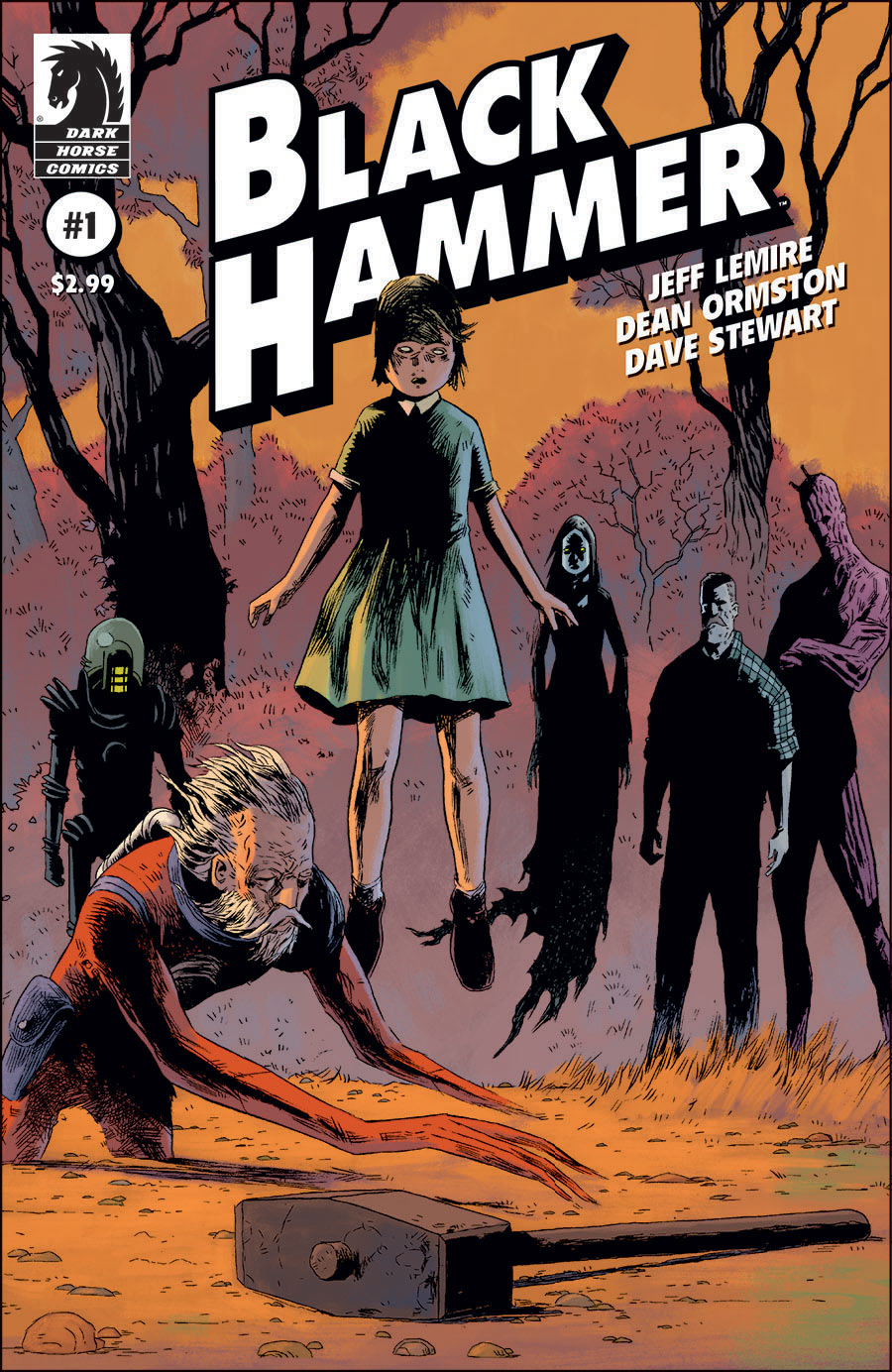 One look at the Justice League of America homage cover for Black Hammer #1, and I was sold.

Okay, I was sold long before that, as soon as I saw this was Jeff Lemire’s newest bit of creator-owned work. And fine, I was sold when I heard Dean Ormston was on board as the series artist. I guess what I’m trying to say, is that Black Hammer #1 is a book that I was sold on before I even knew what it was about. But was its execution and story something worth snatching up after I hyped it up in my mind? You bet.

I’ve been on a big golden/silver age superhero kick lately, diving into the worlds that made comics so fantastical, pages smeared in whimsy and positive-attitude oriented stories. So, you can imagine my thrill upon seeing a new series from Dark Horse, with Jeff Lemire at the helm, Dean Ormston on art, Dave Stewart on colors, and Todd Klein lettering. I usually love Jeff Lemire’s independent work, and while his superhero work has clicked less with me, I was overjoyed to see him take on this kind of story with art that clearly fits like a glove.

Black Hammer #1 provides a fresh and sobering take on Golden Age super-heroics and its pitfalls. This first issue follows a group of former superheroes forced (for reasons not quite fully known yet) to live on a farm with each other, their secret personas hidden from the public. The cast of this story is quirky and diverse, including group leader Abraham Slam, the off-kilter Colonel Weird and his pal Talky-Walky, the robotic-energy humanoid, Barbalien, alien warlord, and Golden Gail, the glory-girl trapped in the teenagers body.

This issue tracks their group dynamics, while introducing the reader to their world, from their honoring of their fallen hero-friend, the Black Hammer and their meeting with Madame Dragonfly. The team of superheroes was presumed dead after a tragic battle in Spiral City, and by issue’s end, we find they may not stay so hidden when a tenacious reporter vows to uncover the truth.

Jeff Lemire has come up with a story that blends genres in the most enjoyable way possible. Black Hammer celebrates Golden Age heroics, from the quirky names to the zany action, but also asks the questions, what happens after? While this isn’t the first time this question has been asked, Lemire’s first issue promises a path of twists and turns ahead. The tone is overall eerie, the characters haunted by what their future may hold, while honoring the past they lived through, providing a gorgeous juxtaposition of hope and fear.

Each of the characters already feel fleshed out and full, but the possibilities for character interactions are endless and exciting. Much in the same way that Manhattan Projects was successful because of the interesting characters and driving plot, Black Hammer is positively drenched in intrigue. Lemire’s dialogue is top notch in this issue, providing funny moments laced throughout an overall mysterious story.

Dean Ormston is a force to be reckoned with on this opening issue. Ormston has been on my radar since his work on Vertigo’s Bodies, his unusual style a perfect correspondent to Lemire’s writing. In fact, his art bears a resemblance to Lemire’s own uncanny style, the overall tone an impeccable complement to the eerie feeling this book emanates.

Ormston uses a lot of small lines to make the characters look worn, his detail working wonders for the emotional impact of this first issue. The character designs are other-worldly, alluringly composed. Each panel is easy to read, but also provides plenty of action to catch your eye. Subtleties in the environment and character body language go a long way to bring great depth to the visual appeal of Black Hammer.

Dave Stewart’s colors are absolutely glorious on this book, yet another perfect pairing to the tone of the story. The settings are drab (which is not bad, in this context), adding to the sentiment of the idyllic life the group now lives. But, Stewart’s colors sing when capturing the colors of vintage comics, providing flashy and exciting visuals that match the highlights of the character’s lives.

Todd Klein also has his work cut out for him, as several of the characters utilize different styles of lettering to capture yet another dimension of their character. He invokes these speaking styles smoothly, contributing another layer of visual beauty to this issue.

Black Hammer #1 is imaginatively exhilarating. This is a world I cannot wait to dive into again and again, revisit, and share with friends. Lemire has done it again, collaborating with some incredibly talented artists in Ormston, Stewart, and Klein to create a powerfully exciting book.