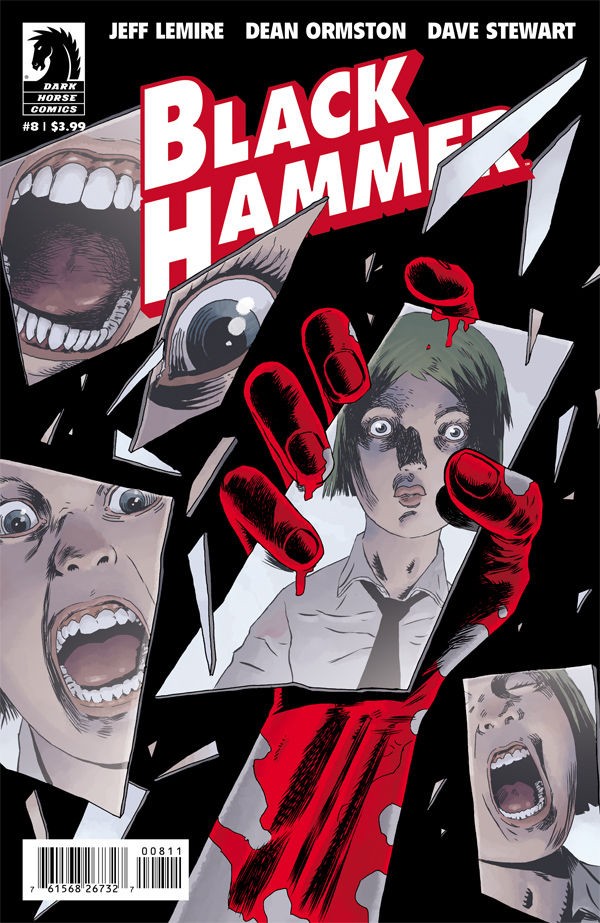 Leave the past behind or you may just miss something important. In Jeff Lemire’s series Black Hammer we have learned that some members of the super hero team, that are trapped in a small town, have a much easier time at letting go than others. Golden Gail, however, is definitely not one as she has struggled with letting go of her past since the beginning. Issue #8 focuses mainly on her revealing more of her backstory.

Lemire is an extraordinary storyteller that immerses us into his world with great dialogue and use of heroes and ideas that we are already familiar with. He can drop us into the story at almost any place because the reader can hit the ground with their feet running.  The dialogue continues to be perfect and some of the best scenes in this issue, as well as in past issues, is Gail whispering, saying, screaming: Zafram! This issue gives us a better look at what she physically left behind and the reader will realize why she won’t mentally leave her past behind. The playful dialogue between Father Drake and “Mark” is nicely done and shows us the continued development of their relationship. There is a fear, though, that Barbalien may be misreading Drake’s intentions. The addition of Lucy, Black Hammer’s daughter, in the previous issue is helping to move the story along and inject some energy to it. Lemire continues to give us a surprise with each issue and the end of this one delivers.

Ormston continues to produce excellent art and his style helps make this series what it is. There is a lot of nice texture work done on the buildings, giving the town a very old or frozen in time feel to it. The characters have a very clean look and feel to them making them stand out from their surroundings.  Ormston does a superb job of communicating to the reader a wide range of emotions in the facial expressions of the heroes in this issue. Gail’s expressions communicate so much when she is saying her magic word. Stewart’s pale color plate reinforces the retro style of the book. He uses a lot of oranges in the flashbacks to Gail’s life when it was probably at her happiest but by the end of the book we end in up in some gloomy pale purples.

Lemire has stated that the series will only be about 18 to 20 issues, so we are already almost half way through. The uniqueness of this story, though, will certainly make readers wish there was no end in sight. He has done so much excellent character building by both past and current events in their lives that we have a strong connection to our heroes. If they are going to survive in the town much longer they are going to have to let go of what’s holding them back. Otherwise they aren’t going to see the dangers around them until it’s too late. Absolutely grab this issue if you have been following along and if you haven’t then this would work as a jumping on point.