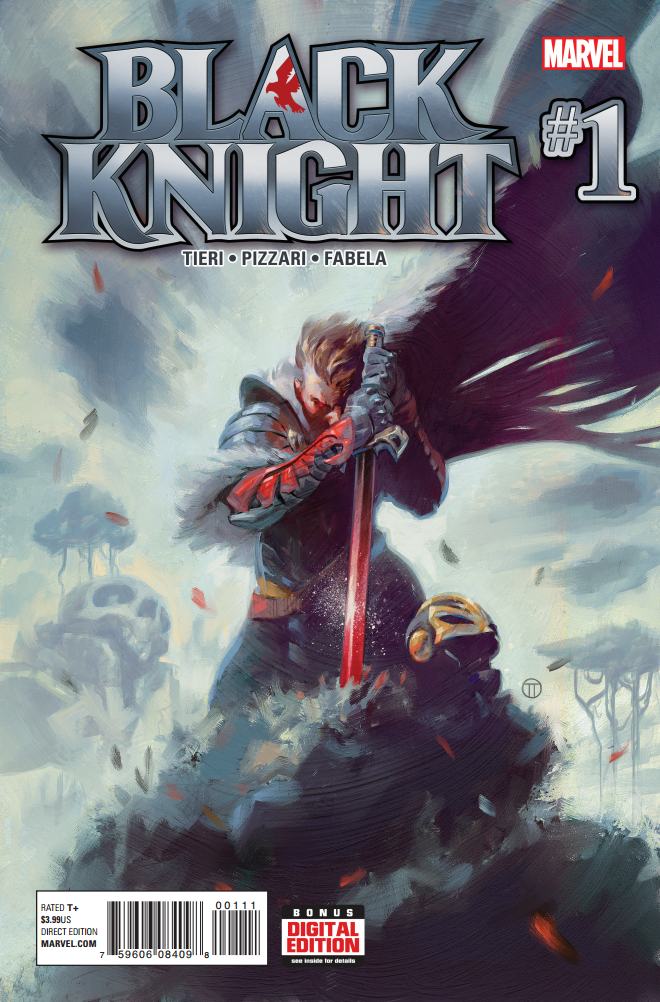 From Camelot to Weirdworld, the Black Knight is a force to be reckoned with.

Dane starts the issue giving a brief history of the legacy of the Black Knight and how it made its way to him. Through villainy to avenging, the Ebony Blade has empowered many men in Dane’s lineage. Now in Weirdworld, Dane finds himself as the leader of a crew of warriors, all the while uncovering small connections to his life in the Marvel universe. Through the course of the issue, Dane meets with some familiar faces, leading to many questions regarding his place in Weirdworld and with his former teammates.

My familiarity with the Black Knight is minimal, which is exactly why I wanted to pick up the series. I knew about him from the pages of Avengers, but wanted to see what more there was to him. WeirdWorld is an interesting setting, but given his cast of characters it seems to fit. He almost gives off a medieval Star Lord vibe, collecting trinkets and treasures from his home world. Dane seems to want to hold onto these tangible pieces of his former life, but doesn’t have as many reservations about being in a different world at this point. As the Black Knight, he’s good with fighting near ethereal lizards, and I wonder how he truly feels about staying in Weirdworld.

Frank Tieri’s writing definitely fits one of the more strange corners of the Marvel universe. Dane seems almost accustomed to being in Weirdworld, adapting to fighting lizards and mysterious flying monsters. I wonder what will become of Dane’s connection to the Ebony Blade, as well as how he relates to other characters who pop up within the pages of Black Knight. Tieri seems to have a long haul in mind, not revealing too much about Dane and Weirdworld, so I think there’s a lot in store for our titular Black Knight.

Luca Pizzari and Antonio Fabela craft a masterful darkness that is perfect for Black Knight. The colors and rough lines create a murky atmosphere, illustrating the enigma of WeirdWorld but also Dane’s ancestral ties to the Arthurian Black Knight. While the supporting cast was more fleshed out, there was something appealing about Dane’s expressions being shrouded and almost nondescript. These little details helped to enhance the feel of the issue.

The supporting cast stole the show for me. Bolten, Alkyra, and Percy are important framing elements to Dane’s more modern identity. These characters help to show that Dane isn’t quite back in the regular 616, but that he’s at a point in time and space that follows different rules. I’m interested to see how they show up in the future and the influence they have on the story.

While Black Knight #1 left a few questions for me and was not quite the introduction to the hero that I’d hoped, I am curious what’s to come for this series. There’s a lot of potential to use elements left from the aftermath of Secret Wars, and I want the series to capitalize on that. This issue gives a brief primer for a relatively obscure Marvel character, but I think it will take a few issues to fully gain its footing. Arthurian legend always gives a great foundation to work from, so I hope to see Black Knight gain its wings and create a shining Marvel magic story.