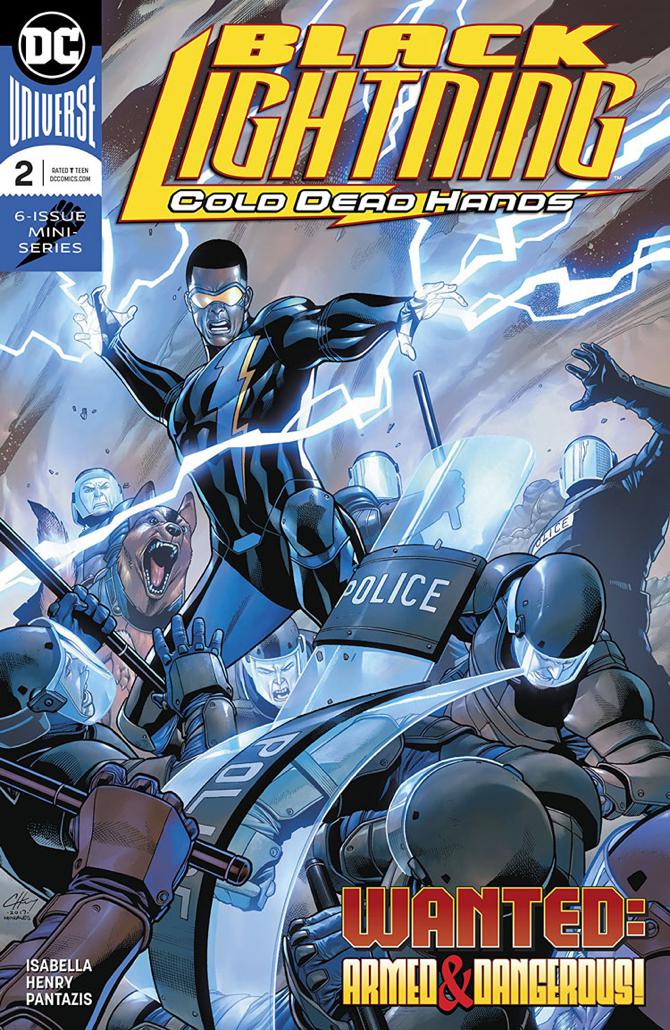 Jefferson is trying not only to guard his city but to ward off the undue weight of being seen as a murderer. At the urging of those around him, he continues his role as an educator, but even that crosses lines with his being Black Lightning. He begins to uncover clues that reveal his foe, but he still has to contend with sci-fi weaponry and the biases of the police force of his home.

To call Black Lightning: Cold Dead Hands a roller-coaster is an understatement. This creative team has sought to tell a story that brings together many different worlds that realistically intersect even if there are some people who do not know how to fully meld them into a fictional narrative. Jefferson’s challenge goes beyond protecting his home: he must also do the day-to-day while recognizing the target on his back as a hero and a Black man and that neither fully negates the other.

Tony Isabella layers this narrative without losing any of the vital pieces. Especially around the middle of the issue, we see Jefferson balance his differing roles and aspects of his existence. Isabella’s capacity for portraying the plight of the Black man within this narrative is astounding and I appreciate that we get a more grounded look into what it’s like for our protagonist to be a hero. At zero points can he make a decision free from the weight of society’s bigotry or expectations, and I feel that this is a very pragmatic look at how Blackness intersects with heroism in a manner which is frightfully true.

Clayton Henry does well at capturing the realistic with the slightly fantastical. Characters’ proportions feel true to life, while their emotions may be exaggerated. Using this kind of style is helpful for putting a carefully comedic spin on real issues. Isabella seems to craft a world that does mirror our own, but uses the liberty of art to make enough of a divergence that meaning isn’t lost, especially in the moments that capture a camaraderie between folks of all walks of life. This type of visual storytelling brings cultures together with subtlety, but without denying the reality that many of us, whether skinfolk, kinfolk, or otherwise, do form bonds.

Pete Pantazis on colors brings a refreshing vibe to Jefferson and everything that surrounds him. The brightness in Pantazis’ work imbues an adventurous tone though much of the narrative is grounded in the reality of police brutality. Combining these seemingly disparate narratives is helpful for fully conveying the underlying tones of the story. Jefferson does not just face police as a vigilante, but as someone who is marked for violence based on an oppressive system. Pantazis’ use of clear and vivid palates combines the world of the superheroic with that of the unsettling truth regarding bodies of color saving folks while still being in the crosshairs of institutional violence.

Black Lightning: Cold Dead Hands continues a story about Blackness in the face of oppression, bringing together a classic cape story but with the realistic spin of systemic violence without gratuitous harm. This comic is proof that such a tale can be told without subjecting its characters to undue harm or ignoring the plight they may likely face in our own world. I admire what this team is doing to tell Jefferson’s story and I appreciate the care they have put into every page, panel, and dialogue bubble. This is a great progression for Black Lightning and I hope it leads to more stories with a similar level of depth and reflection.