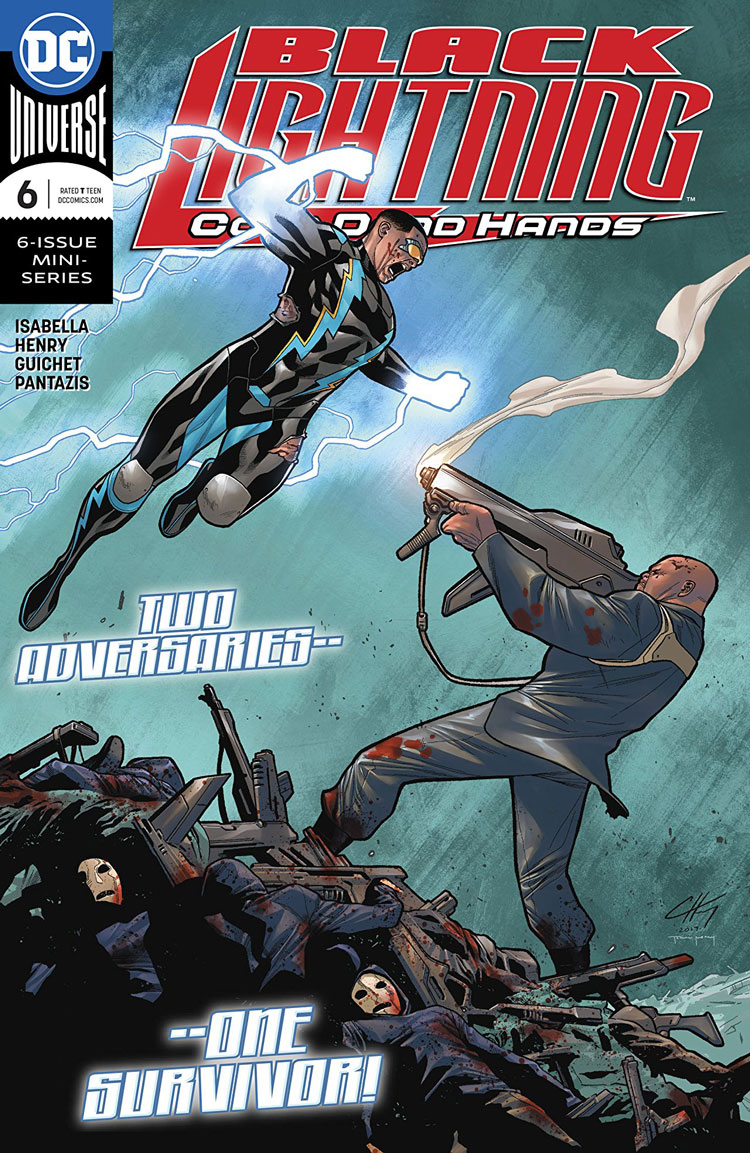 The clash between Jefferson and Tobias Whale comes to a head. After an exchange of blows and a timely villain speech, Tobias feels victory within his grasp, only to find that his foe has actually had the upper hand. Resolution seems to come easy at first, but it is soon revealed that, although one threat has been quelled, there are still issues to handle in Black Lightning’s Cleveland.

Cold Dead Hands is trying to manage multiple threads and levels at once. Yes, it is a rather traditional cape comic, but the infusion of social issues means that it has to take typical superhero thoroughfare and address deeper narratives that have to be taken carefully and seriously. While on the one hand, the story wraps up in a nice “All’s well that ends well” tone, yet it also gives adequate attention to community issues around race and violence.

From Tobias’ revelation of his plan to the assessment of police and community relations at the end of the story, destabilization and structures take up our attention. Tobias has an astute awareness of how varying systems work, including the fact that police fear of people of color holding power, particularly in the form of weapons, and the capitalist investment in community upheaval and friction with power structures. While these features did not take the express focus in this issue, they are present enough to be thought-provoking as a parallel to our own world.

Initially, a cop asks Jefferson if he’d like a ride after the take-down of Tobias Whale, indicating a shift from earlier interactions between the police and black folks, especially Jefferson. Had the story ended with this particular moment, I feel a lot of significance would have been lost. Instead, we get to see that things have changed to some degree, but the structural factors still manifest as oppression, lending a sense of realism to the story in that it recognizes that sometimes specific events can bring people together, while leaving the problem still festering underneath the momentary feelings of kumbuyah.

This issue really shows Tony Isabella leaning into the medium of cape comics. The preceding issues felt much more serious and grounded, and some of that is traded for a slightly more lighthearted, adventurous take on the mini-series. Such a shift is an interesting decision and ultimately one that is able to add levity to a story that could have ended on a more somber note. Either of these tonal bookends would have lead to a differing impact at the resolution of the miniseries, and Isabella chose one which allowed the presence of hope.

The appearance of Cyborg and Flash fits within this hopeful theme and they serve as a sort of climax before Jefferson discusses how things have really changed for his home. Isabella may not have hit on racial politics as hard in this final issue, but there is enough attention paid to the reality that the more things change, the more they stay the same. Hand in hand with a budding optimism in Cleveland is the understanding that social undercurrents re-emerge and problems are not always so insular or easily dealt with.

Clayton Henry and Yvel Guichet almost make this story feel playful. Tobias is a disparate image as a menacing and powerful figure, though this visage does not last long as Jefferson begins to fight back. Characters almost feel comedic in the first half of the issue, ascending from uncertainty to gaining an advantage in a longer struggle. In the latter half of the issue, as story elements are coalescing, Henry and Guichet cast people as introspective, a signal to the surprising final page and an open future for Jefferson and his role in the DC Universe.

Pete Pantazis’ colors are bright and buoyant, lightening a situation that appears dire once the story begins. As Tobias towers over Jefferson, their environment is clad in energetic and aggressive warmth, but once the tide turns so does the color scheme. That first purple flash is a sign of change, illuminating Jefferson and Usagi. From this point, the story becomes increasingly bright. Toward the end, Pantazis begins to darken the colors, working alongside the contemplative nature of the issue’s finale. Tracking the story just through this layer of storytelling is an adventure in itself.

Though the meta-commentary was a bit on the nose throughout the issue, Cold Dead Hands ends on a satisfying note. It doesn’t seem to dive as deep into social politics as its preceding issues, and I do feel there was enough room to make such a thing happen, but it does bring things together in a manner that does not ignore structural and systemic racism and that works within a DC tradition of folding a story into a universal narrative.

I’ve enjoyed this comic and it was refreshing from start to finish. I’d love to see Jefferson in a more long-form context, but these creators set out to tell a story that works within this window and that still manages to touch on realities faced by black and brown bodies, as well as how these could believably intersect with super-heroics.