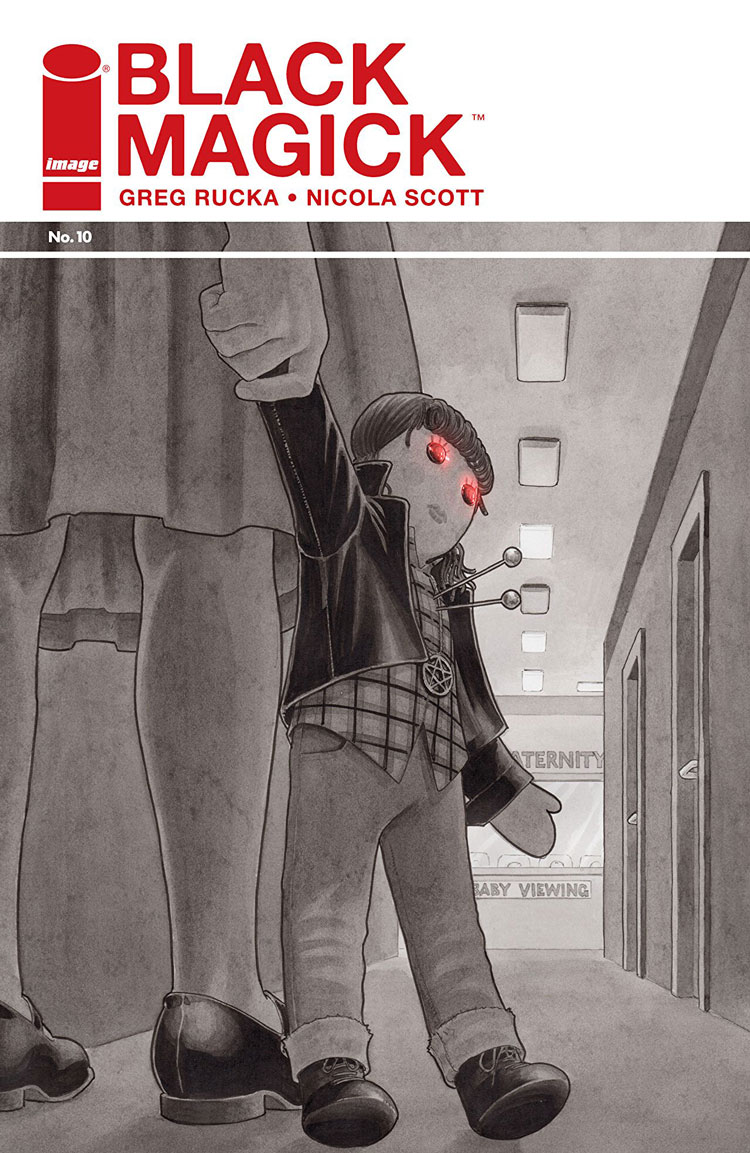 Rowan gets some much-needed rest, as Alex finally confronts the witch-hunter from Aira and Morgan is about to welcome his son to the world. But as Rowan sleeps, her enemy is getting closer and closer, and their next victim is about to make his appearance.

Here’s a fair warning: if you’re a prospective parent awaiting the birth of your child, maybe don’t read this comic.

For everyone else, we finally get an eye on who’s been working behind the scenes to trouble Rowan and Alex — and it ain’t pretty.

Well, actually, it is super pretty, because artist Nicola Scott, even in delivering the creeps, can’t help but produce some of the most stunning line work and shading in a comic book in modern times. The aesthetic Scott has maintained in the book is so controlled and specific, one might thing it would end up feeling dry. But the opposite is true, as the lack of pure whites (save Wynne’s word balloons) and the soft shadow rendering inside an outlined form is probably the closest thing to how the human eye imagines seeing — closer than photorealism, in fact.

Every character is uniquely distinct, and in this issue in particular, I’m enjoying the mid-career Madonna vibes Alex seems to be giving off, particularly in her scenes opposite Leveque. But all the while, Rowan’s hair, sunken eyes, facial structure, muscular build — it all reads like a genuine person in space, with both consistency and malleability.

But the real treat from Scott and Rucka in this installment is the revelation — at least the physical manifestation — of the adversaries behind what Rowan is being blamed for by Aira. This is some creepy creepy stuff, folks, and I am here for it. We had already been witness to the little girl with her mouth sewn shut back in issue #6 — the harbinger, in fact, to Rowan’s mother’s death. But the introduction of the raven-haired goth spirit Perfect and her Highness in the trenchcoat of blinding light are more fuel for the fire, quite literally in fact.

I’m curious to see what relationship these entities have to Rowan and the Black — are they the classic three-in-one? Are they a part of their own coven? Are they goddesses? Demons? In any case, their target is so perfectly evil in scope, that I can feel the chills that Rowan feels in their presence. They vibrate off the printed page like the sigil on a birth certificate.

The pace of Black Magick that Rucka is setting seems perfectly matched for the level of sophistication and mood Scott in imbuing on the page, in some ways making movement feel like a foggy morass — which in comic book terms is almost always a bad thing. But here, I feel so much more capable to reading in first person through Rowan, experiencing her sense of the world as I would mine. And when dealing with magick — or any kind of fantastic element meant to read as macabre — that’s an asset.

Hawthorne, of course, makes his big kitty move in this issue as well, which feels slightly out of place, but enjoyable nonetheless. What I perhaps found more enticing is the repartee he has with the house itself, leading me to many, many more questions about what kind of world is not accessible to me that opens its wings easily to those of the magick. It’s a great detail Rucka inserts that adds to the tapestry of the title, even if it’s far from the most shocking bits of issue #10.

Another gorgeous chapter in a title that remains gawk-worthy in style and substance every month, Black Magick #10 has definitely set the tone for the remainder of the second arc — and it’s clearly going to get nasty fast. Let’s do this.