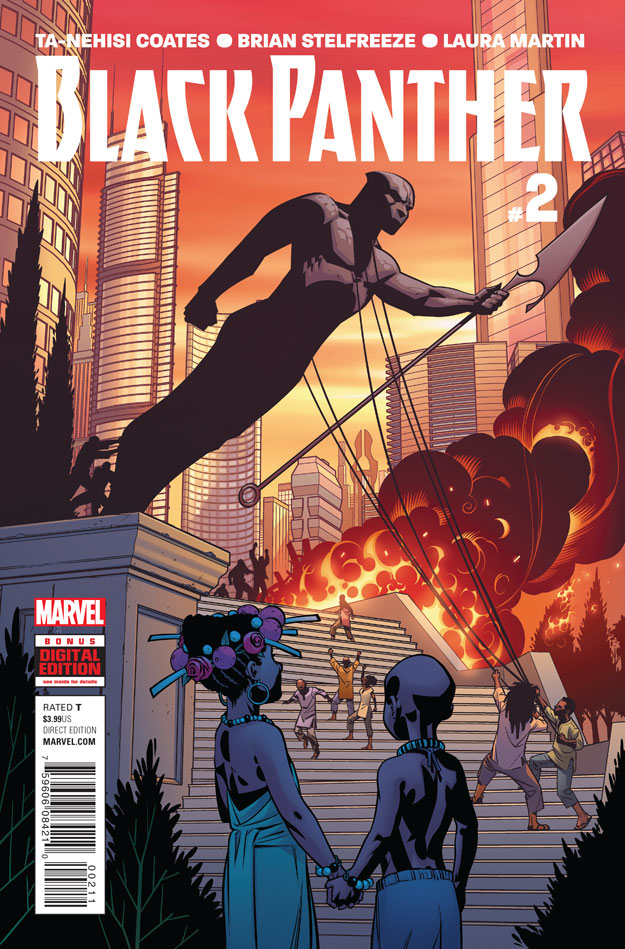 What is my remedy against the robber, who so broke into my house?

As T’Challa uses his role as king and protector to help his people, the Midnight Angels soar through the air on a wave of vengeance against men hurting Wakandan women. T’Challa finds that, while noble, his intentions may conflict with those he wishes to save. Lost in his anguish, he struggles to find a solution for his sister and his nation, as other machinations move around him that may complicate his endeavors.

There’s definitely a lot going on in Black Panther #2. On the whole, though, I like it. This story is very rich with information and layers, leaving a lot of things to be dissected. It’s powerful in that it’s a superhero story but very much grounded in interpersonal conflict, ideology, and human emotional struggle. This particular issue challenged me to think intently about its meaning and what it represents, as well as the larger narrative surrounding T’Challa, Wakanda, and the creative team.

Ta-Nehisi Coates writes a very dense, but engaging story. Keeping track of the plot elements is tricky, as one scene in particular is hard to place in the larger narrative. However, this scene also is packed with meaning and philosophy, a discussion of choice and what it means to fight for your people. I love this scene because it also casts Black men as intellectuals from two distinct vantage points, something we don’t often see outside of Black scientists.

The rest of the story addresses key points, from T’Challa’s role in healing his country to the motivations of the Midnight Angels. Coates is working with many moving parts and, aside from issues with how each of the parts connect, is doing well at executing a story that has emotional and intellectual depth.

Brian Stelfreeze captures the anguish of an ailing Wakanda, manifest in each of the characters and those they interact with. Aside from exoskeletons and vibranium suits, much of Black Panther #2 feels as though it is a picture of daily life, adding to the intensity of feelings from Coates’ writing.

Laura Martin uses color to evoke a rather somber tone through much of the issue. Many of the scenes convey darkness with subdued colors in the environment, but also through the use of shadow in each of the characters. There are a few pages where the scenery is much more bright, setting them apart thematically from the rest of the story and creating a great contrast to the overall atmosphere of this issue.

My favorite part of this art team’s work are the pages detailing the psychic assault on T’Challa. The forms are much more fluid and the use of white to outline the bodies amidst a smoky green and nebulous background is wonderful. Stelfreeze and Martin work well together, particularly in these pages, with their innovative use of color, shape, and background.

I’m not sure anyone else but Coates could pull off the narrative structure of Black Panther #2. Not only are there philosophies to address, but this story feels real and rather visceral.

I’m happy that a Black man is penning this title because Coates is able to speak to a cultural experience with sensitivity that does not betray the characters or their setting, even if we must also point out that this is from an American perspective. Stelfreeze and Martin add to the experience with emotionally laden art, from the characters to the world that surround them. I recommend this issue if you love T’Challa and are down for an intellectually engaging story.