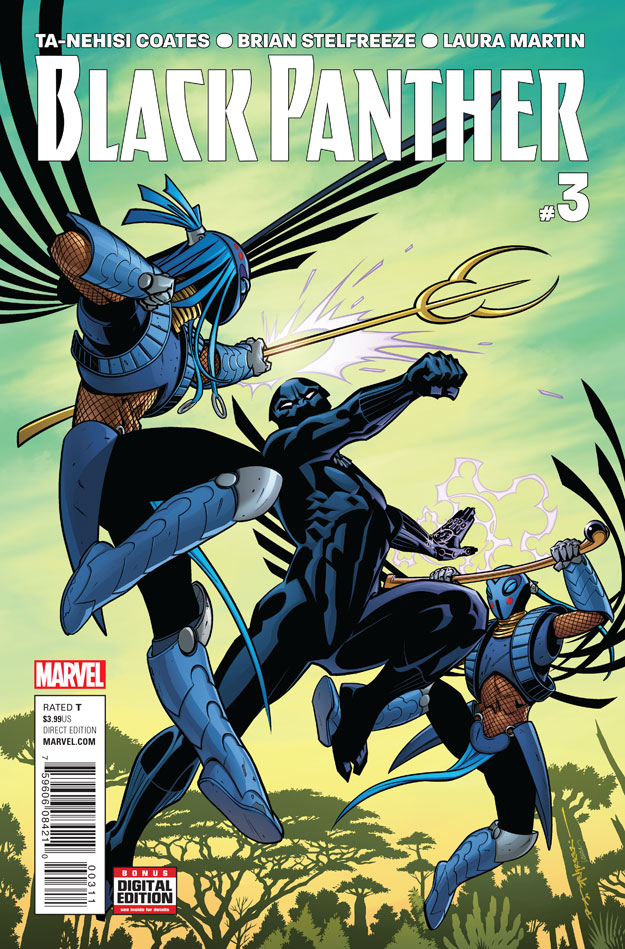 The stakes are ever high for the King and his nation.

While T’Challa continues to struggle with his role as King and hero, the Midnight Angels up the ante, realizing that alone they are strong but plentiful they are mighty. T’Challa hunts down his country’s antagonists, only to find himself and his soldiers ensnared within the Wakandan jungle. Amidst the emotional struggle of reclaiming a nation, a Queen wades through the annals of memory, surrounded by familiar images.

Wakanda has been in serious trouble and each character in this story is trying to deal with it how they know best. I love that, in a gradient of alignment, characters are facing various shades of success. The “villains” of the story, Tetu and Zenzi, seem like they’ve had the upper hand for a while, and the anti-heroes, the Midnight Angels, face setbacks with intense resolve and keep coming back. Poor T’Challa, though, seems to be the most wrought with conflict. Each of these story dynamics make Black Panther #3 incredibly enjoyable, and the distinct shifts between scenes and interactions improve on such a plot element.

Ta-Nehisi Coates’ ability to draw readers into an incredibly evocative story are not to be understated. From the beginning of the issue, the emotions virtually jump from the page, tugging you along by your heartstrings in every panel. T’Challa is struggling, conflicted, and his emotions set the stage for much of this plot through this story. Through him, Coates conveys the gravity of the circumstances in Wakanda, the determination of the Midnight Angels and the Dora Milaje, and Shuri’s confusion as she walks the spiritual plane of memory. Beyond T’Challa’s feelings, the exposition and ending of this issue provide excellent narrative framing that addresses how T’Challa and his antagonists are in some ways foils to each other. Tetu heals the land, leading a father and daughter to rejoice by the issue’s end, while T’Challa seems to sew more chaos than amelioration. These opposing dynamics heighten this installment’s tension while giving question to the motives and the ends of each character.

Brian Stelfreeze’s style takes on varying forms through this issue. Some pages are mystifying with deliberate and specific use of darkness on the characters, and other scenes cast the characters in full detail, bringing forth more of their emotions. Stelfreeze’s silhouettes and shadows enhance the feelings and add intrigue to many of the images in the story. Laura Martin has some deftly used color schemes throughout the issue. My favorites would be the rise of the Dora Milaje, initially framed with intense red schemes moving to a cool sheen encompassing the sudden change of events, and Shuri’s scenes in the plane of memory, which feel light even if captured with contrasting green and purple hues.

Whether through word or visage, the team of Black Panther #3 continues to craft a stellar tale. I’m emotionally invested in each of the characters and the quick transitions within each of the issues feel as though they are beginning to coalesce. If you’ve been a fan thus far, issue #3 is perfect for you and the series as a whole is great for getting to know the inner workings and emotions of the Black Panther.