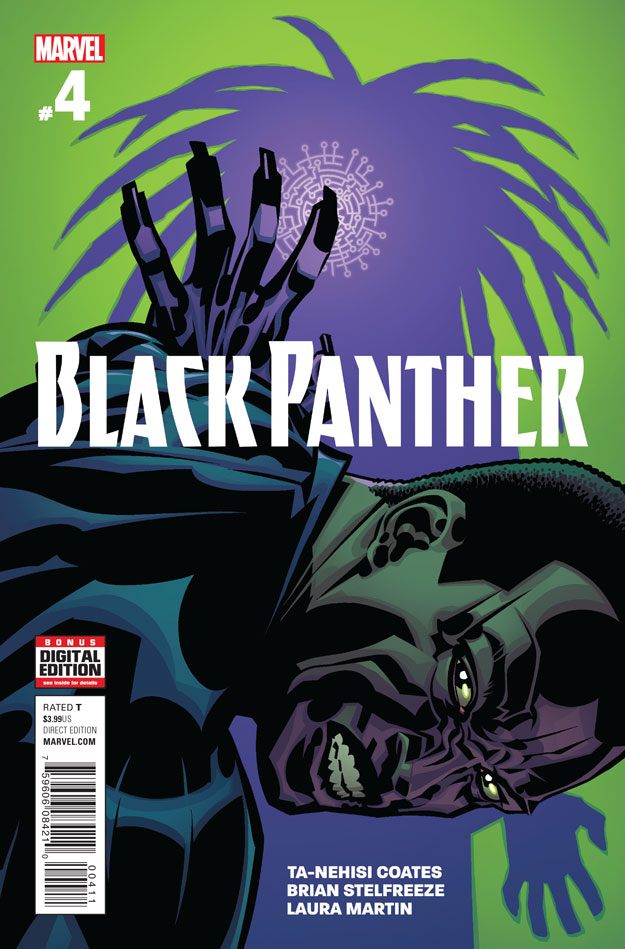 T’Challa meets with Ramonda and trusted others to determine how to heal their ailing nation. While it appears one threat is over, another is quickly gaining ground. They have links to explore, while the Midnight Angels and Tetu fellowship in order to put their plans on the same page. T’Challa feels as though he has a chance to make things right with his inherent compassion, only to be challenged by devastating losses.

In a world where White men dominate the face of philosophy, Black Panther #4 challenges such an ideal by explicitly stating Wakanda’s investment in its own schools of thought, but also through dialogue between characters that addresses relationships and ideals. This issue is a great continuation of the previous due to its weaving of the threads that once seemed rather disparate. The emphasis on character and story development over action provided a useful change of pace, especially by the end of the issue, that shows this arc will deliver on many fronts.

If you’ve been invested thus far, now is the time to amp it up because Ta-Nehisi Coates is tying together threads from the first issue in the current installment. These initially separate ideas are beginning to coalesce in a story that reflects Coates’ ability to tell a story with a long con. I like how these plot threads have come together and how they influence each of the characters and their motivations. This issue is short on action, but heavy on dialogue, relationships, and philosophy, offering a new taste for readers. My major point of contention is the double-edged sword that is Ramonda. She has been a major figure in the story thus far, but has significant presence in this issue. However, that is cut short, and not so surprisingly, by events toward the end of the issue. I’ve put a lot of trust in Coates to break comics traditions, especially when it comes to women, so to see Ramonda have such an impact on the story only to be nearly fridged was upsetting. Her place in the plot is immense and thought provoking, so I hope she makes a resurgence. Until then, I’m going to call into question the age-old tradition of muting important women in comics storytelling.

I appreciate Brian Stelfreeze’s deliberate and detailed style and the placement of emphasis. The changing points of perspective and positioning of the characters feel as though they are moving organically and in realtime. Stelfreeze captures the subtleties of movement and conversation through conversations with characters. Laura Martin and Matt Milla create wonderful effects with colors, whether the orange in Ramonda’s tunic against a cool blue and purple environment, to the majesty of Zenzi’s power. Within many scenes, specific characters stand out through Martin and Milla’s work, using contrasting colors against opposing schemes around them.

While I have some misgivings about the story and specific elements, Black Panther continues to be a solid series. Philosophy, storytelling, and drama mix together to create T’Challa’s conflict, and characters around him continue their movements, complicating the story in an intriguing manner. This purposeful story is intellectually engaging and visually superb.