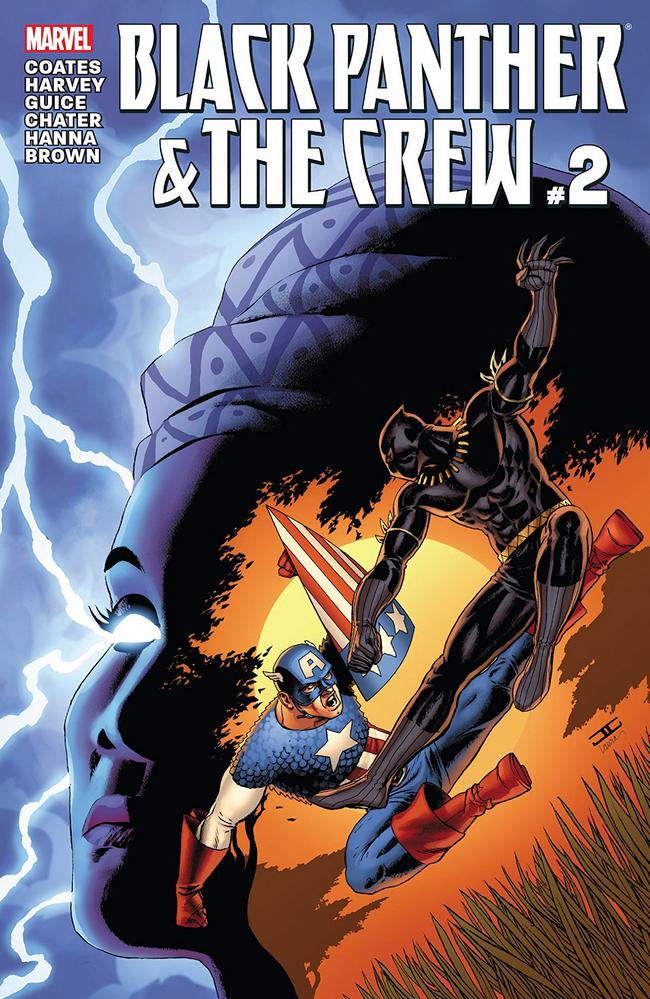 There is a lot going on in this issue.

Misty and Ororo are working to find out the specifics of Ezra’s death, postulating their past and Ezra’s own role in Harlem. Leads are going nowhere for them until Ororo finds a bridge to the magic of her prior life. As she descends into darkness, she comes face to face with the latest member of the crew.

As I said, there’s a lot going on in this issue. The focus on Ororo as a narrator provides a different context for both Misty and Harlem, addressing her as someone who has lived in multiple worlds and has seen multiple sides of each. Her existence as Blue speaks to her chance to connect with her father’s home, but also puts her at odds with everything around her. The fact that this drives the story of the series’ second issue is a strong factor.

Ta-Nehsi Coates and Yona Harvey masterfully craft and layer their story. I like how the plot moves and how the outer shell of narration from Ororo sets the pace for the story. The deep introspection for the weather goddess is remarkable in that it changes the canon of her character and imbues a more detailed context for her role as a mutant and black woman. There are some issues I will address further down, but at large, Coates and Harvey excel at structuring a narrative that is wonderfully engaging.

Butch Guice and Mack Chater’s Harlem, Misty, and Ororo feel much more rough in this issue, but that’s not a detraction from the story. Each level of the art builds to something, and this foundation helps to establish the tumultuous environment of the borough and Misty and Ororo’s conflicts regarding their place in it. Chater teams up with Scott Hanna on inks to deepen the vintage feel of the world reminiscent of old photographs. Their work does not make the story feel timeless; instead, it feels like it is firmly enmeshed in a period bound by the pat, and that effect is monumental for carrying the issue’s tone. Dan Brown’s colors again retain their muted nature from the previous issue, drowning the story in a dreary New York day. This effect helps to emphasize the depth of the unfolding mystery regarding the Crew and heighten tensions between our current protagonists.

Something that has both stood out to me and made me feel unsettled is a brief exchange between Misty and Ororo which I am not quite sure how to parse. Ororo talks about the constant threat of being a mutant, while Misty compares this to being black. Once Ororo brings up blackness in the context of being a mutant, Misty seems to shrug this idea off as ‘Harvard intersectionality’ nonsense. This one page seems like a stark contrast not only to Coates’ work, but also the theme of the series, in that there is a deep investment and intimate portrayal of blackness but this moment seems to ignore the differential experiences of black people.

For one, intersectionality was coined by a black woman, Kimberle Williams Crenshaw, and it addresses how systems of oppression have different forms based on our overlapping identities. Two, that fact that this comes up between two women, both who hold another marginalized identity compared to the other (Misty as disabled, Ororo as a mutant) feels deeply disingenuous regarding how they exist in the world. For this story so far to address the nuances of a black woman being a detective, I find that this one part of the story, which part of me should feel is slight, actually comes across as dismissive of intersections.

I’m used to cisgender and heterosexual black people, particularly black men, dismissing issues regarding non-heterosexual orientations. I’m also used to cisgender black people dismissing black trans concerns. Even deeper, I have seen cisgender black women disregard the experiences of black trans women and femmes. It pains me to say that this is what that exchange between Misty and Ororo feels like. It doesn’t feel important to the story, it doesn’t completely address how looking at intersections can truly be genuinely exhausting when you live it. It feels like a dismissal of these issues hearkening back to the reality that black people who exist in other margins live everyday, and it is disappointing to see in a comic that I felt was truly moving the comic narrative further.

Part of me always feels guilty for taking one moment, one page, one panel, and feeling put out by a story. However, I also recognize that wanting to shy away from such feelings is part of the internalized social gaslighting that marginalized people grow up with, and that it is important to look at these moments as not only insular to their scene or their comic, but in how they relate to the world around them. What I hope is that there will not be more moments like this, especially from Misty or Ororo, and that the story is pushed to a place that I feel it can hold regarding the social politics of the world outside the 616.

Overall, Black Panther and the Crew #2 excels from a storytelling perspective through writing and art. Elements coalesce in a manner which propels the plot and characters to a place of deeper meaning. However, the insertion of brief politics which have more dire bearing on reality is a mark on this issue in particular. I hope the story expands to address that point and looks at the nuances of it, but as it stands, it is not a favorable part of this comic. I’m still invested in the Crew, but there are some ways where I expect better.