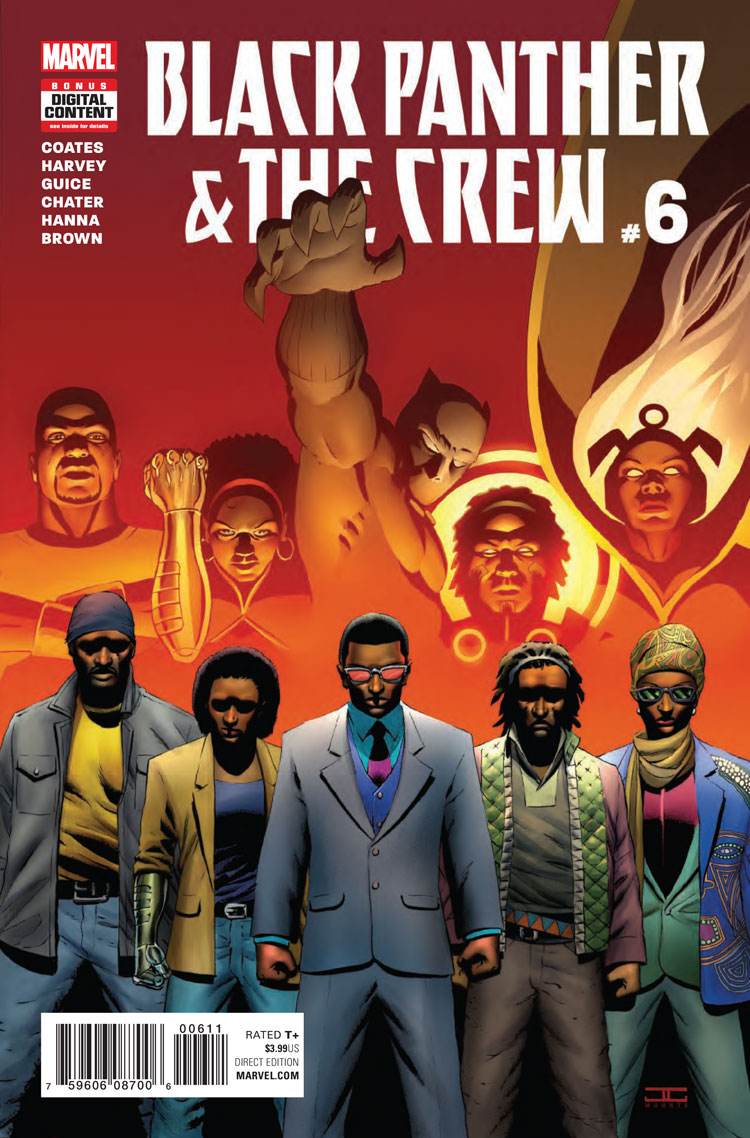 We are the streets.

Harlem’s conflict has come to a head, and the Crew is here to solve the problem. While they realize that they have only handled one of the many heads of the issues they face, there is some solace that part of the story is done.

If there’s one thing I want people to understand about Black politics it’s that they aren’t clean. They are never as simple as black vs white, and that even on the singular axis of race there is a lot to parse.

When you glance at the preceding issues, you see the complicated reality of where people stand when it comes to liberation, that some are more willing to use violence and others do not fully know the role of white supremacy in our nation. Black Panther and the Crew #6, the series’ final issue, lays all of this bare. While I wish it would continue, I can also see the value of this stopping point, though I must also admit that the dubious nature of that announcement with the comic’s second issue mirrors some of the same problems with whiteness and social hegemony that both the Crew and people in our world must manage.

The words of Audre Lorde, that “the master’s tools will never dismantle the master’s house” ring truly through Ta-Nehisi Coates and Yona Harvey. Frank’s use of violence is one that is only superficially done with others in mind, while Ezra’s revealed support from Hydra makes his motives more complicated. Malik hints at something which touches on current events for Marvel, though in a manner which leans upon far more nuanced and culturally aware means than what has been published in the past few months.

Coates and Harvey write a tale that addresses these cultural points without needing to explain them, drawing upon important markers which distinguish this story from a common cape adventure to one which is able to subtly tap into a cultural narrative that has existed through much of American history.

The Americops take a backseat to the primary antagonist, which has a mixed effect. Characters hint that they must still tackle the problem of Paragon, but had to handle an immediate threat. With corporate interests and force as a stand-in for white supremacy, I think it’s vital that these issues be tackled, one large reason being that a person of color should not have to be the definitive villain of this story while the larger system looms ahead. I understand the role of this kind of narrative, but with the series’ end, it is a road by which the creative team could travel to address these cultural ills, never leaving alone any of the heads of an infamous Hydra.

The master’s tools are still left intact, and his house still needs to be dismantled.

Butch Guice and Mack Chater team up with a sense of minimalism. Though crowd scenes mark the beginning pages of the issue, this changes as we see more emphasis on individual characters in their panels. A diversity of panel shapes draws our eyes to Storm, Misty, and the Crew, invoking angles and area in order to put a full showcase on their abilities. Guice and Chater draw a Harlem that feels close to our cities, our Fergusons, and honor the spirit of social change that has sparked similar protests to those we see in this comic.

Scott Hanna finds company with Chater through the deepened angles within the pencils. Capturing the geometric structure of Harlem gives these artists an opportunity to enhance the protagonists’ presence. Whether through close-ups or wide shots, Hanna and Chater build on details in each scene that cast a valuable emotional intensity.

Dan Brown’s dreary, wet style creates a neutrality through shaded colors. When hue intensifies, it’s for good reason. Zenzi’s appearance, T’Challa’s technology, Misty’s coat all serve as colorful distinctions from the rest of the comic. The darker grays and blues work with crowds in portraying the spirit of protest and dissent extant from the first issue.

I believe that stories do have an end. Even if more could be explored with the Crew, I can see why it is perfectly encapsulated in six issues. However, we must note that this cultural narrative is vital and I hope there are more avenues through which stories like this can be told, especially without the promise of longer installments that are cut short by mandate.

All these aside, Black Panther and the Crew #6 is a rather straightforward but deeply meaningful part of the story of the comic and the characters involved. From overt to subtle themes and techniques, we see the range of each of the people involved in the comic. Being able to read this kind of story is a blessing, and it’s comforting to feel as though someone sees what goes on around us and the fact that this kind of reality can be reflected in invulnerable skin, weather control, teleportation, or bionic arms.