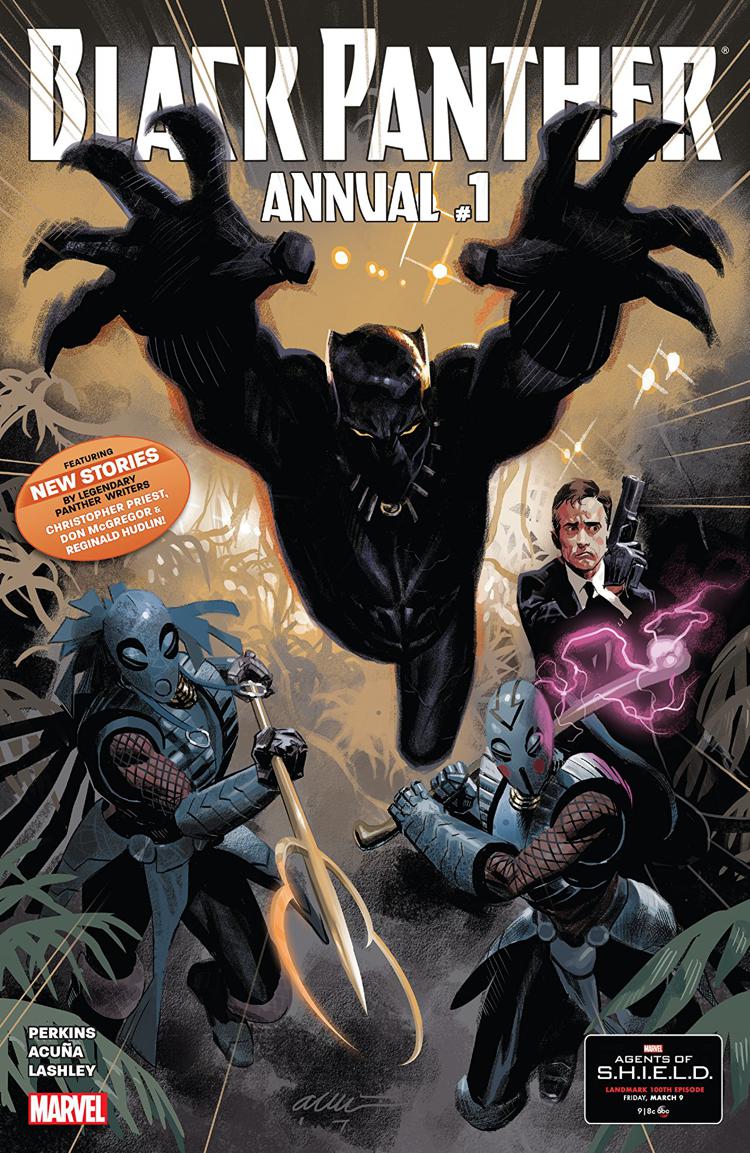 And they’re not wrong.

“But wait!” exclaims random comic book fan, “How can you omit Jack Kirby?!” After reading this comic, I’d say just like it was done here, and no one got hurt. That’s not dismissive of Jack (and Stan Lee’s) work. Creator credits are noted on the exact same opening page that declares this comic to be a celebration. Kirby laid the foundation for the three writers featured here. These three are simply more responsible for developing Wakanda, the Panther’s supporting cast and the shared history of all of it – all of which factor into the growing phenomenon of the Black Panther.

Those writers? Priest, Don McGregor, and Reggie Hudlin. Each contributes a tale to the Black Panther Annual #1, which is a fine sampler anthology comic to introduce readers to the world of Wakanda.

Priest starts it off with twelve pages of “Back in Black,” a story featuring Everett K. Ross. The tale winds in the Hatut Zeraze, the White Wolf, Nakia, and the Panther himself, in Priest-style writing, with scene-setting title boxes courtesy of letterer Joe Sabino and stunningly dark art from Mike Perkins and colorist Andy Troy. Perkins does a great job channeling Sal Velluto and Mark Texeira, but keeps enough of his own style present throughout the story, kicking off a fine opener for this issue.

Next up is Don McGregor, writing a tale titled “Panther’s Heart” that is drawn by Daniel Acuña (future Black Panther artist teaming with perhaps the greatest contributor to Panther mythos). Acuña’s art is rich and evocative, giving the story a timeless feel, as though it could be from the present day or a long-lost inventory tale. The hand-drawn title, with T’Challa leaping past it sets the tone for the reader to keep moving through the book. McGregor’s story is twelve pages of beautiful prose punctuated by Acuña’s art and economic dialog that makes the scene quite somber and sacred as readers learn about the Panther’s relationship with singer Monica Lynne.

The issue closes with “Black to the Future Part II”. This six-page introduction to a future timeline supposes a “What If. . .?” type scenario wherein Wakanda leads the world, not just through example, but also through dominance. Ken Lashley’s art is gritty and detailed, but Matt Milla’s fresh-out-of-a-new-box-of-crayons-bold colors pop forward, giving the art (and story) more optimism than the artifacts of war alone would indicate. This is an interesting tale to close the book on, as it definitely has story potential, but most of the potential is on the edge of this tale, never really shown or described.

As frequently as comic companies get dinged for short-changing creators, Marvel does the trio of Black Panther writers a nice favor, putting a full-page ad in the back to help readers find more Black Panther stories that might align to the tales in Black Panther Annual #1. If any of these stories find their mark with readers, many of those recommended additional tales will almost certainly appeal as well.

Pardon me while I emphasize the importance of this comic to a larger, less-frequent comic buying audience: THIS COMIC SHOULD BE PUT INTO THE HANDS OF EVERYONE LEAVING THE THEATER. Marvel figured out how to get this in the hands of the regular comic book readers and what to give the comic shop owners to handsel new customers looking for the adventures of T’Challa and friends, but they need to take that marketing savvy up one more notch and get this to everyone. Put it in the app. Make a new app. Do something to extend this celebration and invite more people to it.

After Black Panther Annual #1 truly is a celebration of everything Wakandan. It’s not a sprawling, endless buffet, but it is a delicious sampler. Pick it up for those times when you want to read something, but you’re not sure what. Pick it up because you love Black Panther. Or this dazzling trio of writers. Or both. Just pick it up and enjoy it.