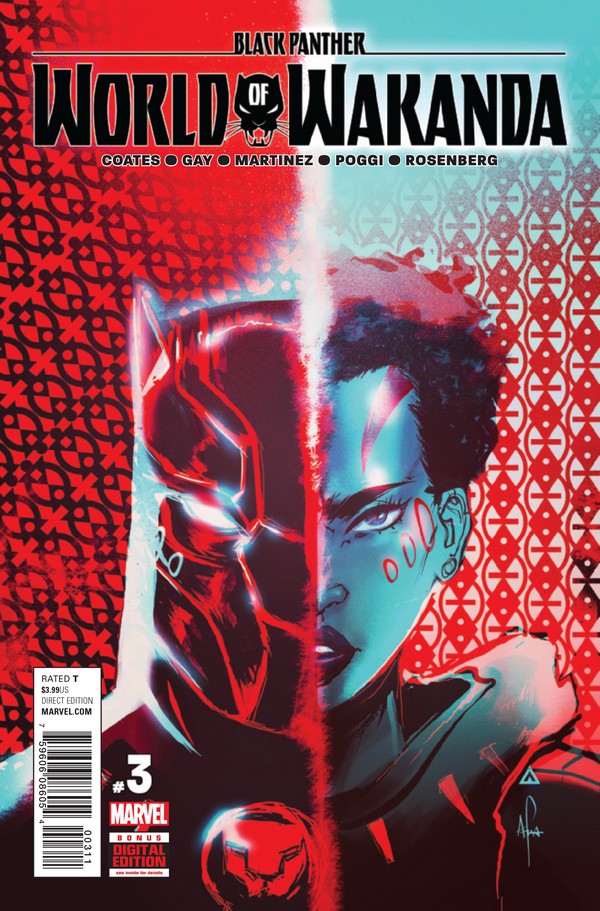 Tensions grow between the women of the Dora Milaje as the women stand divided on how much power they should have in this issue of Black Panther: World of Wakanda!

Gay and Coates have woven a fantastic tale thus far, and have not failed to impress in this latest edition to their series. The differences between the culture within Wakanda and the culture within the United States feels pronounced in this issue, especially when a certain pair of people decide to take a trip to New York City. The random guys trying to pick up girls scene feels very realistic, to say the least. The strongest writing, though, is within the relationship between Ayo and Aneka. It’s a relationship torn between loyalty to ones country and loyalty to ones heart. It’s bittersweet in its development, but where it’s going feels well rewarded because of that.

Martinez, Poggi, and Rosenberg deliver in this issue. Martinez and Poggi are intricate in their designs. I love the techno-punk tattoos of the Dora Milaje. I love the attention to detail in the attire of the characters and the difference between how characters dress in Wakanda compared to New York. I love the glimpses of handholding throughout between Ayo and Aneka.

The backgrounds come to life because of Rosenberg’s coloring. The backdrop of Central Park as well as the lit up sky of New York at night would not have been as beautiful without Rosenberg’s choices.

While I wouldn’t say one scene necessarily stands out in this issue, I will say the development between Ayo and Aneka really does. There’s something wonderful about how casual they can be when alone, it’s freeing to watch. And yet, they have a duty. They have a job both of them love and a country they have been entrusted to protect. There’s a knowingness in their eyes when they suit up for their next mission, this understanding that they are not as free as they could be if they had chosen different paths. That once again, complexity will be added to their relationship that, when alone, seems so simple and natural. Their relationship is the best thing in this series thus far.

I recommend checking Black Panther: World of Wakanda out. It’s a great series so far and it’s only getting better.