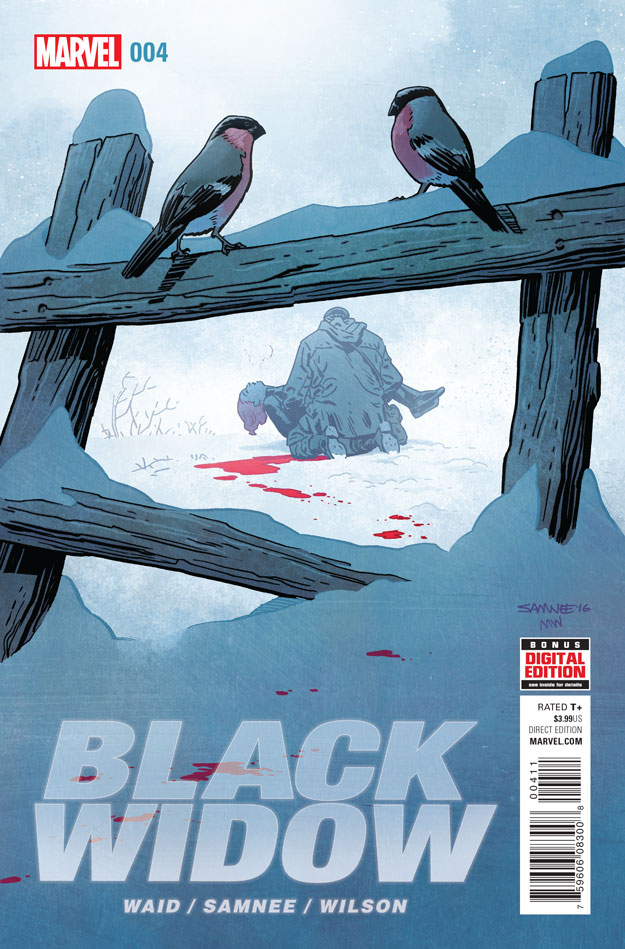 There have been a number of Black Widow series in the past, but none like this one. We see Natasha Romanoff so often in the Avengers titles we may often forget that before she was a hero, she was a spy. A Russian assassin with a very troubled, dark and mysterious past. Yes, we are all (or at least most of us) familiar with Natasha’s upbringing to a certain extent – raised in a Russian training camp called “The Red Room.” A horrific school where young orphan girls are transformed from regular children into cold, hard killing machines known as black widows. Natasha, of course, being the most skilled and celebrated and pupil of all.

In the past, this history has been rarely more than referenced, but here we get a rare glimpse into that secret world. Chris Samnee and Mark Waid definitely know their way around a spy story, the way they incorporate classic tropes (with a whole new, unique flavor of course) is downright genius. Without revealing too much and spoiling all the mystique that is the famous Black Widow, what this amazingly talented team allows us is much like viewing scenes through a keyhole. Just enough is left to the imagination to keep Natasha’s shadowy reputation in tact. Thanks to the help of colorist Matthew Wilson’s clever use of silhouettes and Russian reds, the ambiance of a spy “going into the cold” is exactly how you’d want to experience this epic story.

In this issue we are introduced to an old friend of Natasha’s, though just how this character plays into her backstory remains to be seen. As a woman with few personal attachments, we can only surmise that when the truth about it is uncovered, it will be more than interesting. It seems that the past has come back to haunt our heroine in a surprising way and that this storyline is only the beginning. As for the blackmailer, the “Weeping Lion,” we are still left wondering just what it is that they are holding over Natasha’s head. Here, the question is raised whether Natasha is truly afraid of what they have on her, or if she’s got a bigger plan in store. It certainly would not be unlike her to play the player.

Overall this is one of the most exciting titles on the shelves right now and it’s painful waiting for the next issue to be released. This team executes with more precision than a surgical team and hits their mark every single time. Black Widow is in excellent hands.