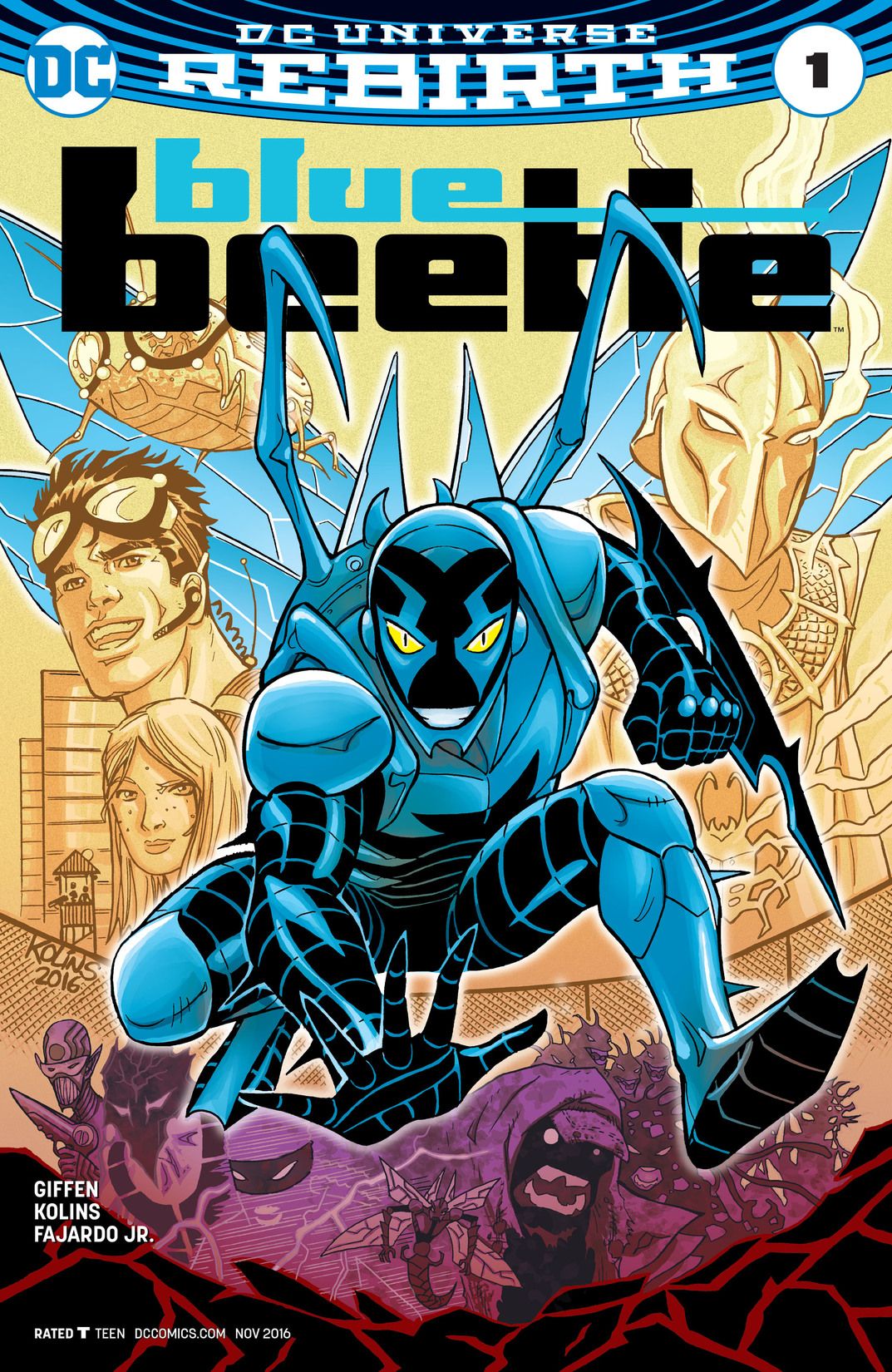 Blue Beetle is back! Blue Beetle Jaime Reyes has a mentor! Former Blue Beetle Ted Kord is teaching him the ropes! This is a new beginning for the both of them and it’s packing action, mystery, and some new twists along the way.

If you missed the dashing preview of the two in the DCU Rebirth one shot and the Blue Beetle: Rebirth special then you’ll be surprised to discover that the scarab on Jaime’s back has magical ties. The issue points this out in the opener as Jaime narrates a “dream” of Doctor Fate doing battle with a Godzilla-sized Blue Beetle. He narrates that this same instance has been happening for a week now and it felt out of place because he wasn’t observing Fate but the Beetle.

The opening demonstrates just what the creative team is capable of to say the least. Giffen keeps things comedic with serious undertones because of his mostly teenage cast and Kolins and Fajardo keep the color scheme tightly knit, with the destruction never taking its eye off of the magical designs and blasts of the golden Doctor Fate and Bluezilla Beetle. Even the notion of the contrasting blue and yellow are lent to the speech boxes to differentiate the back and forth exchange.

The true heart and shine of the book comes from the parts displaying Jaime and company in high school. Everything from the student body, diversity in the hallways, and range of faces Kolins creates alongside Fajardo and his colors is something to take stock off as you read. Everyone in the panel space has their sense of self and it’s important for the scenes themselves to sell the introduction of Ted Kord as the special speaker trying his darnedest to inspire a new generation to no avail.

Giffen spends time fleshing out both sides to Jaime’s supporting cast in both of his friends at school with typical teenage speak consisting of inside hero jokes and run of the mill conversation. On the flip side, the good nature of Kord Industries lends more action oriented and plot heavy happenings to the table.

Alongside Ted, Jaime kind of gets the gist of the mission more or less given Ted’s “reliable” sources and with that sequence and what’s to come, it’s shown why Keith Giffen on Blue Beetle reads like the greatest Saturday Morning cartoon. The witty banter between Jaime and Ted is parts hilarity and partnership with good intentions. Jaime is the more serious of the two and it shows.

Ted (Don’t call him Mr. Kord) is more aloof in nature and being sidelined he has to live through his inventions, Company, and Jaime to a point. They have to rely on one another to see the mission and I took it as a personal note but, seeing how the scarab doesn’t communicate with Jaime as far as we know….having Ted being in his ear serves as a reminder Jaime has sarcastic support on his side. Whether he likes it or not.

The climax of the issue ensues with a battle between Blue and a new age Nightshade, a villain from Ted’s days as Blue Beetle. The battle ends rather quickly but it’s displayed masterfully with the solid colors, displays of action, and sound effects throughout. Even the banter between Jaime and Ted are appreciated as Jaime does the heavy lifting and is forced to think on his feet. The issue ends with the arrival of bigger threats for the Blue Beetle Rogue’s Gallery and with the solid start the creative team have set with this colorful and bombastic start, the legacy of the Blue Beetle might have a lasting home in Rebirth.