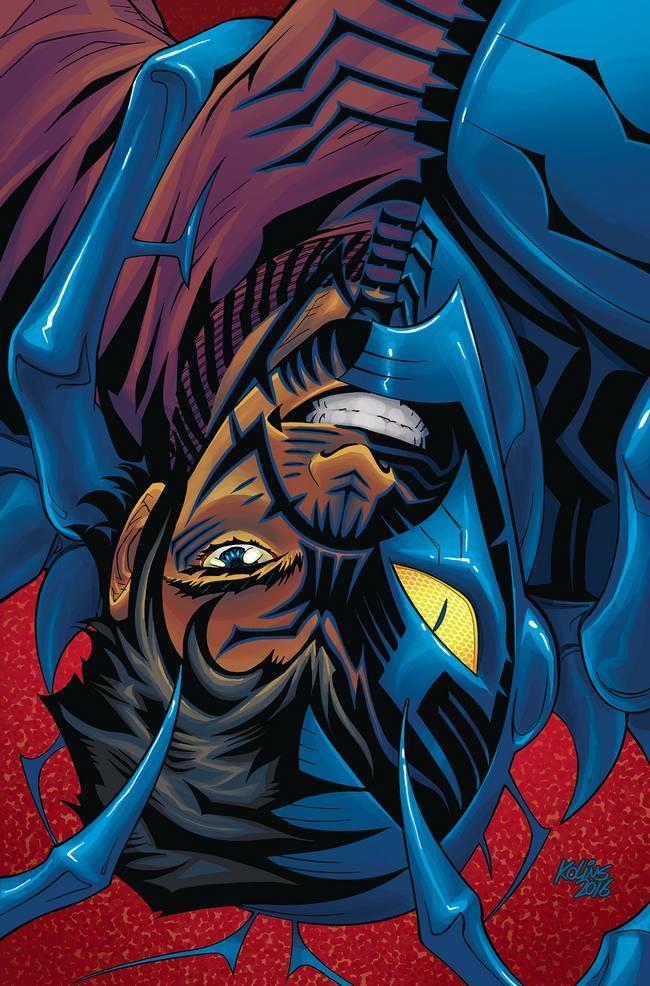 If you’re an easy-going, “Comics are fun!” reader, you may have warmly embraced the emergence of Jaime Reyes as Blue Beetle in the mid-2000s. If not, odds are you held a knot of bitter, bitter rage in your stomach at the loss of Ted Kord. Or, perhaps these names mean nothing to you, and “Blue Beetle,” to you, is Dan Garrett. If you fall into that last category, you’re going to be disappointed. Fans of the previous two, however, have cause for rejoicing, as Blue Beetle: Rebirth #1 brings back BOTH Jaime Reyes AND Ted Kord!

Storytellers Keith Giffen and Scott Kolins take it a half-step further and try to give you the end result of the Blue Beetle equivalent of peanut butter-meets-chocolate as well when they throw readers into the action on page one, with a splash page, a stack of captions and new foes – Rack and Ruin, who remind me a little bit of the Thunder and Lightning twins from Teen Titans of yesteryear.

Comic fans know what to expect from Scott Kolins: solid storytelling, exaggerated characters, details, and occasional instances where Kolins’ strengths have to fight a little harder to overpower on-page distractions. Unfortunately, in Blue Beetle: Rebirth, those distractions are plenty and hit right away. The opening page under a barrage of captions also has some minbending perspective that doesn’t play along with the story. Best I can figure, neither Rack nor Ruin can warp reality, but the streets of El Paso seem warped during the fight. Another distraction is figuring out the fussy design of Jaime’s armor now. It’s less clunky and more bug-like, but there are panels where his eyebrows flare off the mask and panels where they don’t. The shape of the antennae coming off of the scarab-generated backpack and the coloring of the costume overall also vary.

The coloring throughout Blue Beetle: Rebirth #1 is vibrant, but inconsistent, favoring flat tones, but occasionally adding polish or dodges and burns that would be nice on a single image, but instead seem over-rendered when presented in sequence. Romulo Fajardo, Jr. gives readers some great visuals to appreciate throughout the issue, but I’d like to see a little more consistency, even if it is at the expense of flashy individual images. I’m not sure if this is on Kolins or Fajardo, but the background pattern outside and under the panels is, well, awful. It’s distracting, like static on a previously clear broadcast, and I’m just not sure what is being transmitted by its presence. What I do know for certain is it’s unnecessarily busy when viewed onscreen. I’ll be sure to tweet out the effect once I have a paper copy in hand.

One last note on the opening page: after a quick break away from my screen, when I came back to the splash page, I felt the colors deliver similar tones and values to a great deal of the DC Super Hero Girls marketing dress. That’s not a bad choice, and I might be off, but that is impression I had from a glance at the page before I resumed my review.

Giffen’s script is full of heart and potential, and Giffen is to be commended for sharing storytelling credit with Kolins. The script, however, is the gem of the issue, and the third page of Blue Beetle: Rebirth had me feeling comfortable about this return to El Paso and resumption of the adventures of Jaime Reyes. The scripter gives Brenda and her Aunt Amparo, Paco, Mr. & Mrs. Reyes, and Milagro back to us, but also adds in an enigmatic take on Ted Kord. Pleasant enough, but oddly so, Kord runs mission control aboard the Bug, offering Jaime guidance and advice. When the duo are conversing off-panel, there is a distinct difference in their captions, and Josh Reed takes that farther by providing a distinct difference between the setting captions and the dialog or story captions.

Celebrating the legacy – or at least the concept of legacy – gives Blue Beetle: Rebirth a nice distinction that elevates this issue beyond anything the New 52 version of the series was able to accomplish. From the start, Giffen and Kolins set out to expand and explain the story of the Blue Beetle(s) through constructive means, and they construct a LOT in Blue Beetle: Rebirth, adding Rack and Ruin, like a villainous Mac and Tosh, working for a mysterious employer, giving both Beetles assignments, and even seeding a mystery as Doctor Fate shows up, but only makes a slightly more memorable appearance than he did in the Rebirth kickoff special.

Blue Beetle: Rebirth #1 is not a perfect comic, but it is a bold one. There’s humor, melodrama, teen angst, and family sitcom alongside action, adventure, mystery, and world-building. I’ve missed Jaime Reyes. And Ted Kord. Now, thanks to Giffen, Kolins, Fajardo, and Reed, we’ll be able to have some grand adventures with both of them. I know I’m looking forward to it.