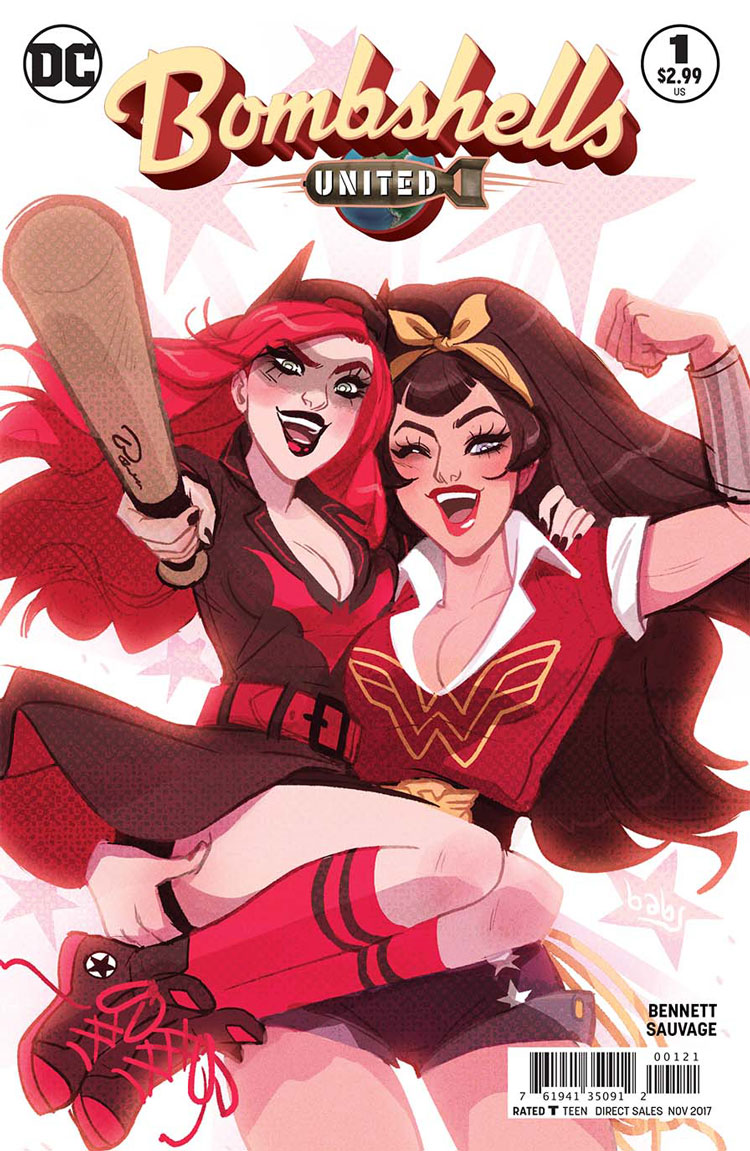 The Bombshells are back.

This digital-first series started in 2015 and became a fan favorite. Notable for the cast of Jewish and queer lady superheroes who fight the Axis powers in DC Comics’ alternate universe version of World War II, the book provided a welcome story for fans who were looking for stories with a diverse cast of superheroes fighting bigotry.

In Bombshells United, the second volume, our heroes are in the United States to fight against the internment of Japanese Americans during World War II. Print issue #1 includes the first two digital issues, which introduce us to the main cast of characters and their plans.

As in the previous series, the writing in the book uses a combination of character narration and dialogue to convey some very deliberate messages to the reader. The story introduces us to new (to the series) characters Donna Troy, Cassandra “Cassie” Sandsmark, Yuki and Yuri Katsura, and Dawnstar. Donna Troy’s narration and later dialogue between multiple characters sets up the themes of the story. Although Wonder Woman arrives to help our heroes, the story is set up so that she arrives in response to the people who called for her.

One of the best parts of the previous series was that large portions of the story told from the points of view of characters who were part of the demographics targeted, and I hope that this series continues in that vein. It would be easy to focus on Wonder Woman as the well-known protagonist, and I hoping that she continues to be a member of the team without overshadowing the newer characters.

I’m especially interested to see some character development and learn how each of these characters’ personal stories, which have only been very briefly mentioned so far, relate to the themes in the larger plot. It seems as though the story is setting up some conflict between the team members to illustrate the concept of complicity and the need for solidary. It should be interesting to see how these interactions continue and how these conflicts are resolved.

The story transfers over well from digital half issues to the combined print issue. The artwork and panel layout seems clearly designed to be easy to follow in either format. As the heroes are rescuing the civilians, I appreciated that the artwork focused in on the faces of the civilians, establishing and emphasizing that the focus of the story is about the people who were unjustly treated. The individual character designs are bright and hopeful.

Cassie, Yuki, and Yuri’s outfits, which are similar in style but in different colors, make them look like a superhero team even before Wonder Woman shows up. As Wonder Woman is front and center in many of the panels in this issue, I hope that the other characters get their time to be the focus of the artwork as well. These bright superheroes are against a background of despair and sadness with lots of red. The earthy colors and choice of supervillain reveal in the issue fit well with the title of the arc “American Soil”.

The story is trying to strike a balance between criticism of one’s own country and a belief that one’s country can improve. There are also themes introduced regarding multiple marginalized demographics being used against one another by the government and the importance of solidarity despite these attempts to divide and conquer. I’m very curious to see how these concepts are handled going forward. This installment is mostly set-up and leaves me wanting to read more to get a better idea of where the story is headed. It remains unclear if the series would read best in digital chapter, single print issues, or trade; however, I would guess that fans will likely want to read each installment right away.

The previous Bombshells series was one of my favorite comics and I’m looking forward to reading this one as well. This book is attempting to address incredibly important topics, and that always comes with the nervousness of whether the story can live up to its promises. Superheroes exist to do the right thing and help others, and that should include looking at the bad things done in our own society, not just other societies. I hope this series will live up to the high expectations that come with the topic.