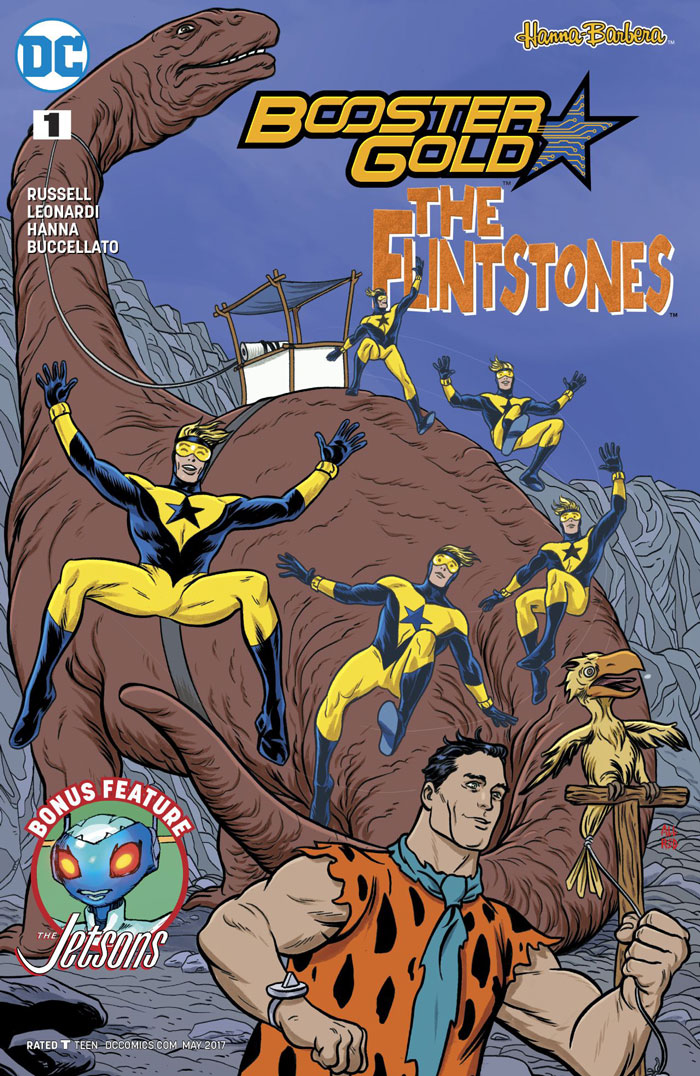 From the distant future to the incredibly-distant past, this one-shot teams up fan favorite Booster Gold with the Teen+ update of The Flintstones.

In 2472, Booster is enjoying a night out in a world where the animal population has become all but extinct. Interrupted by an alien invasion, Booster is forced to head back in time to Bedrock to save the earth a long time before it gets endangered.

It may seem a bit pedantic to question continuity in a one-off story like this, but as a long-time Booster Gold fan it was a bit jarring that he is living and hero’ing in the 25th century at the beginning of the story. This, of course, doesn’t play to any variation that’s ever been done in his 30-year history.

That aside, the interplay with Skeets is textbook Booster, and his missteps are reminiscent of the JLI-era bumbling glory hound. There was a moment of genuine laugh-out-loud humour for me near the end of the story.

Leonardi’s art has some rough spots and feels a bit unfinished at times. There does not seem to be a standard for Skeets’ fins, for example. His art really shines in the later pages, though, and he handles the action scenes with finesse, breaking his rigid panel grid so that Booster can have a “hero moment.”

Buccellato’s colour choices are muted and at times reminded me of Hanna Barberra comics of my youth. Again the strongest work is in the last few pages as our heroes team up against a shared enemy.

Both covers are wonderful, Allred bringing a ton of fun and energy to his, while Jurgens/Rapmund give their blessing to this issue with a slightly more serious Booster (and slightly less serious Barney and Fred).

A prologeu to an upcoming Jetsons series, this curious little tale focuses on Judy and her paternal grandmother who is considering the far future’s version of old age.

Rosemary Jetson, George’s mother, is reflecting on the changes she has seen in the world in her 124 years and this is a clever way to lay out some of the world-building that is needed for this more ‘realistic’ take on the classic cartoon. Look for explanations of why they live in floating cities in the sky and what the space program led to.

We get a quick intro for George and Jane (and an even quicker one for Elroy, who only has two lines) and see a lot of the design aesthetic Brito brings to putting the sharp corners on the cartoon concepts.

The design is the highlight of the story, using the cartoon buildings and vehicles as concept art for a more traditional sci-fi take, while never veering to a dark Blade Runner aesthetic that would have been a less compelling way to go.

It’s the future by way of the 60s, and I’m looking forward to where it goes from here.