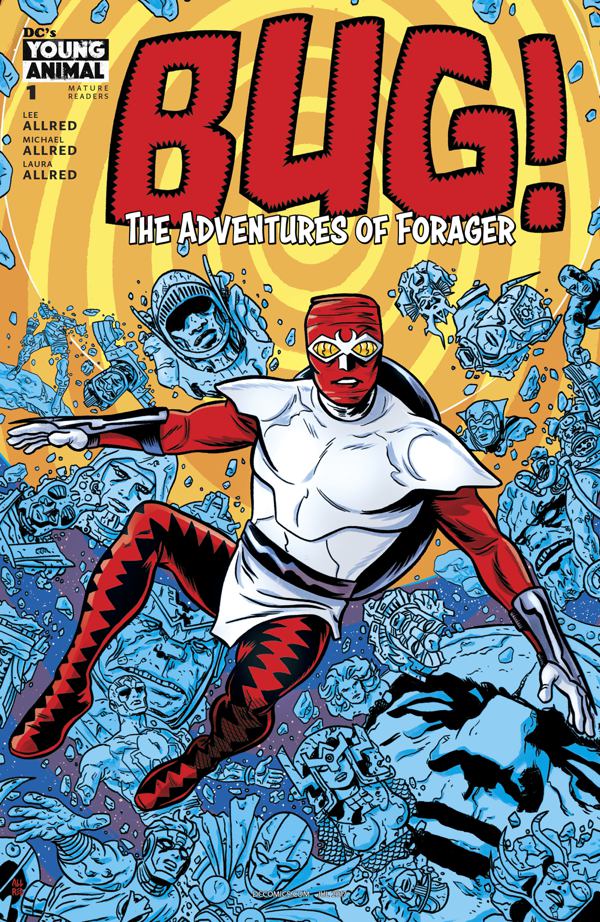 Dougsclaimer: While I usually follow the standard of referring to creators by last name, in this case, I will be using first name, since every creator (save letterer Nate Piekos) in Bug! The Adventures of Forager #1 bears the surname Allred.

“Bughouse Crazy” launches the first Young Animal miniseries from a trio of Allreds in Bug! The Adventures of Forager #1. Following a bit from Cosmic Odyssey, which was recently recollected and re-released in a slick hardcover deluxe edition, this comic introduces readers to Forager, one of the New Gods. Well, sort of.

As this story reveals, he is sort of a New God, and more of a loner. Matching his status as a misfit, Forager encounters a teddy bear and a ghostly little girl in the basement of a house. And it only gets weirder from there.

Filled with gorgeous Michael Allred artwork that is vibrantly colored by Laura Allred, Bug! The Adventures of Forager #1 has panels with Batman, Mister Miracle, Deadman, O.M.A.C., and a pair of brightly-colored Sandmen. Michael’s art has long contained a heavy homage to Jack Kirby, but with Forager at the center of this comic, the Kirbyverse is even more connected. As a matter of fact, most of the characters that appear in Bug! The Adventures of Forager #1 have Kirby in common.

Needless to say, Michael paying tribute to Jack Kirby makes for a beautiful looking comic book, especially when the art is liberally sprinkled with Kirby crackle and boldly colored to punch eyeballs in the, well, eyeballs. Like Kirby, Michael makes the characters feel real, despite the madcap exaggerations of anatomy, posture, and pose. Michael adds in some nice brushwork and shading through crosshatch throughout Bug! The Adventures of Forager #1, giving this comic an appearance unlike anything else on the stands this week or next.

The story is, in and of itself, an adventure. There’s a clichéd notion at the heart of the tale as a character wakes up in a strange land, unsure of the how, the why and the where, but in exposing vulnerabilities, he becomes our gateway. Such is the case here, but the glimpses and peeks Lee Allred and Michael offer allude to a deep, rich story waiting to be mined for even more comic book zaniness.

And the zaniness is where the Allreds excel. Bug! The Adventures of Forager #1 does more than quietly celebrate the creations of Jack Kirby. It brings the energy of Kirby’s creations while playfully investigating the boundaries of the sandbox. What would happen if Forager met a pre-Neil Gaiman Sandman and had a vision of Atlas an O.M.A.C.?

Bug! The Adventures of Forager #1 brings unpredictability and fun, dusts off some fringe DC Comics’ characters and looks at them from different angles. When the time comes around for the main character to introduce himself, he prefers “Bug”, since “everybody calls me that anyway.” It’s this spirit of taking what is given and running with it that the Allreds give readers a wonderful, wacky, ambitious debut that has a lot to offer longtime comic fans (especially Jack Kirby aficionados), but it also expects readers to just enjoy the ride.