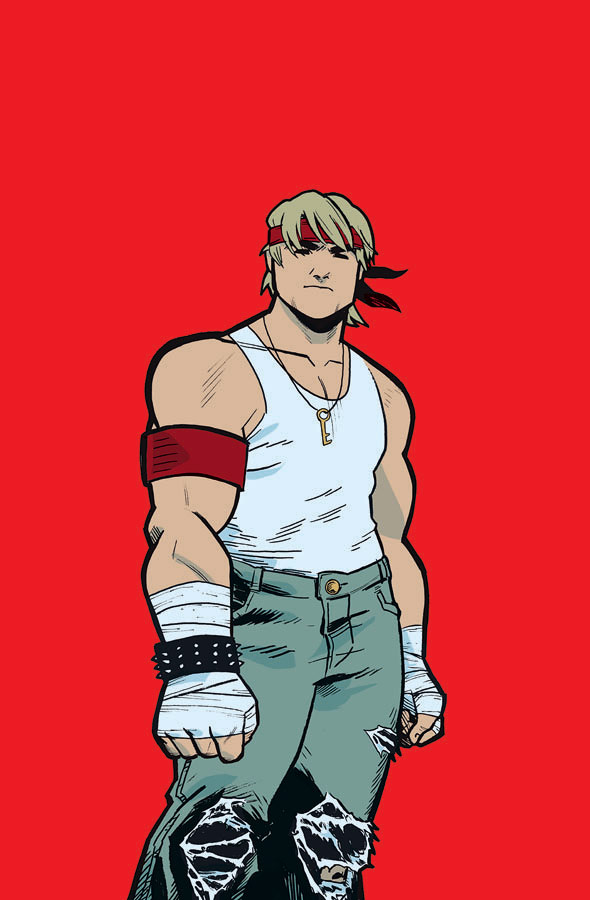 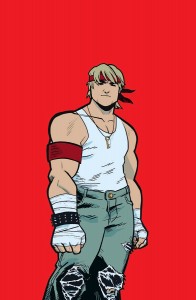 If the term “Side scrolling beat ’em up” means anything to you then you should be excited for Image Comics’ Burn The Orphanage, as Sina Grace and Daniel Freedman take everything a lot of 80s and 90s kids love about old school beat ’em up video games and translate them to the comic page successfully.

The first part of a planned trilogy, Burn The Orphanage is a love letter to video games such as Final Fight and Streets of Rage. These games almost had stories that were simple, multiple characters to play as, characters that were one note, special moves for the players to pull off, plenty of stages to play through, a lot of random bad guys to beat up, and a boss that was always evil and tough to beat. All of these are found in Burn The Orphanage, and just like most of the video games to which it pays homage to, this comic is a whole lot of fun.

The comic stars Rock, a young man who, as the only survivor of an orphanage arson, is hellbent on finding who burned down his home and exacting his revenge. On this mission he is joined by his best friends — the big bearded man named Bear, and Lex, the woman he loves like a sister. If this were one of the video games mentioned above, it would be easy to see each of these characters on a character select screen for the player to choose from. The story starts with Rock at a bar trying to find information that will lead to the person he is looking for and hits its climax on top of the biggest building in the city. Each stop between these locales are offered up like stages of a video game with waves of random bad guys that seemingly come out of nowhere to beat up on. At each of these “stages,” a little more information is given that leads them to the next stage all the way until they reach the final boss.

The story itself is very simple and definitely aimed at those who grew up around the same time as the creators and shared mutual experiences. The video games usually had very little story that were presented through small cut-scenes at the start and ends of the game. While Grace and Freedman do expand upon the approach of the often times one sentence stories found in these games, they keep the spirit of them alive with a simple revenge story. Rock wants to know who burned down the orphanage and he will fight through tons of people to find out.

Beyond the homage to video games of yesteryear that not everybody will appreciate, the next best selling point of the book is the art. Grace, and colorist John Rauch, do a great job of making each battle scene (in a book that is essentially one battle scene after another) stand out from one another and look great. I would be remiss to not bring up that yes, there are visual homages that fans of beat ’em ups will notice, but they are so well rendered that they can be appreciated by all. One instance is the use of actual perspectives found in side scrolling games. This is a look that was also used in a recent issue of Hawkeye. I loved how it was used there, and loved how it fit in so smoothly. Everything about the look of the characters screams homage, but you don’t need to know that to enjoy the fact that Rock looks awesome wearing a denim jacket and red bandana while beating up thugs. The action is plenty and it looks awesome, from Rock and company beating up stripper ninjas to the fight against the rich super boss atop the tallest building in town.

Overall this is a hard book for me to score. As somebody who grew up on video games of the late 80s and early 90s I feel that I was “in on the joke” so to say, and absolutely loved the book. For somebody not familiar with what the creators were seemingly trying to accomplish then it all depends if you can accept a very simple story in exchange for a lot of action and some great visuals. If you read this review and thought, “Wow this sounds awesome” then it is probably a book you will love and you should buy it immediately. For those of you who had no idea what I was talking about for half of this review then you can take a point off of my final score and know that this is a fun book full of action. I enjoyed this book immensely, loved the little bonus page at the back of the book, and will definitely be looking forward to Demons: Born To Lose Part 2.