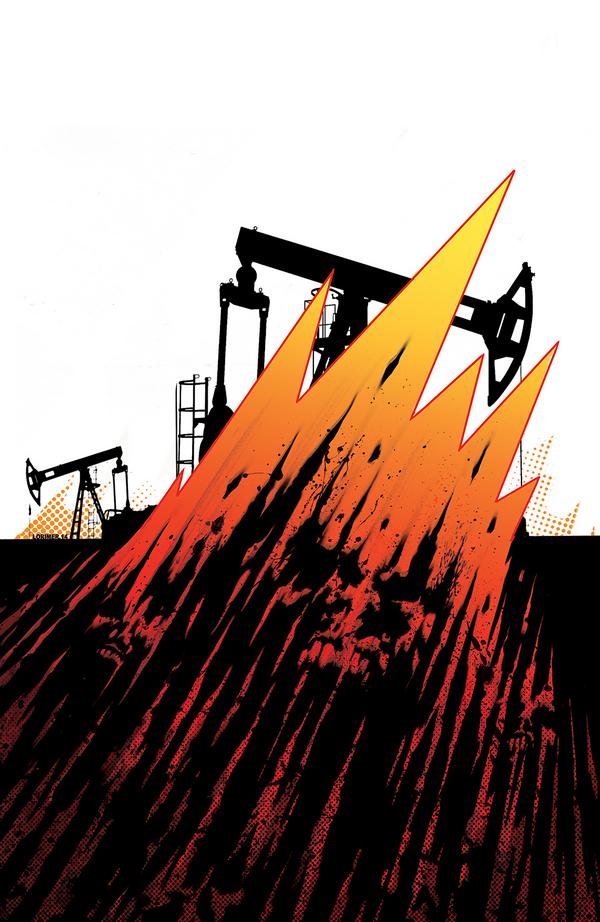 Get ready for a kick in the face as Moreci, Daniel and Lorimer take you to the exceptionally tense world of the oil fields of Iraq to investigate a brutal series of murders.

Moreci and Daniel don’t hold anything back in this one, giving readers a story nearly as brutal as Men of Wrath. Burning Fields deals with some harsh topics in a harsh setting, and certainly makes some commentary about the current state of affairs in Iraq. The characters in this story are hardened and have definitely seen some intense stuff go down in their time, and vague references are made to some pretty violent acts in the past. This story bleeds intensity, and feels like it will explode any second in a violent and brutal manner. I keep bringing up the brutality of this because this story is not for everyone – this goes to some very dark places, but if Men of Wrath and Stray Bullets is your jam, you’ll certainly appreciate the story being told by Moreci and Daniel. They structure the story well, and it flows easily. While I will freely to not liking any of the characters, per se, Burning Fields isn’t about that. This certainly isn’t a feel good tale, but rather a gritty gut punch of a mystery with some horror elements to boot.

Colin Lorimer’s artwork sets the tone of the issue, and each of his pages exudes a feeling of extreme violence. I’m not exactly sure how to say that, other than even the pages when nothing overtly intense and chaotic is occurring, it feels like it may in any given panel. There is a tension running through his pencils that suits this story well. The horror elements of this story are Lorimer’s strongest work and the colouring by Joana LaFuente really drives home the horrific elements of this title. They are a strong match of an art team for these writers.

Burning Fields #1 is an intense horror/thriller that hits hard and never stops attacking. The comic bleeds intensity and for those who are fans of graphic and intense books, there is a lot to enjoy in Burning Fields. I will admit that it isn’t what my tastes typically gravitate toward, but for what it is I found it to be executed well.