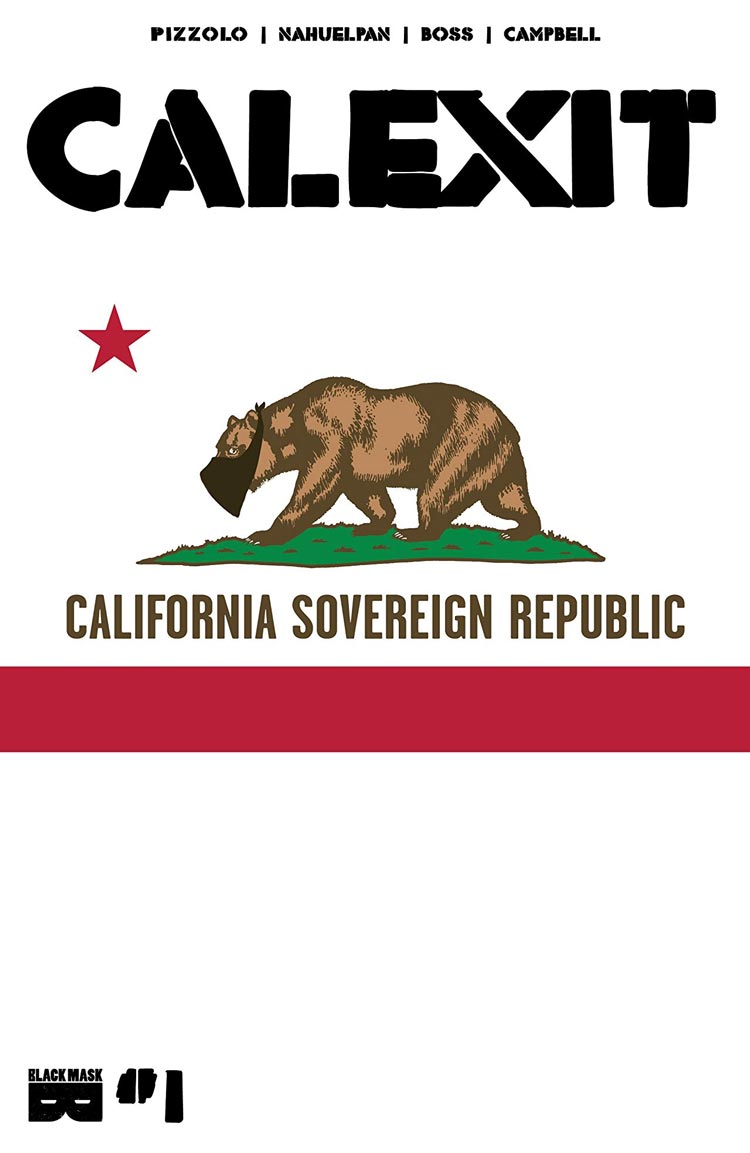 “Only in Cali where we riot not rally to live and die.”

It’s a matter of time before all the cheques come”

– Snow Tha Product, Immigrants (We Get The Job Done)

In Young Terrorists collaborators Matteo Pizzolo and Amancay Nahuelpan’s latest collaboration, they present readers with a riddle: First, how do you bring people together by telling a secessionist fable — and second, tell a story of antifascist resistance using the name of a movement that collapsed under allegations of being funded by Kremlin operatives?

In the editorial essay following Calexit #1, Pizzolo begins unravelling that riddle by suggesting that California is a fitting microcosm for the entire country. While it’s likely to cause as much of a stir outside California as the comic’s title does within it, there’s a salient point to be made. Pizzolo points to the overall diversity of the state and the general urban/rural partisan split to sell the idea, but it isn’t offered up as a rationale for flattening the entire country into a singular generalization; it’s a reflection of the curious dual role of renegade and steward that the Golden State occupies in the cosmology of left wing American politics, especially in the context of the Trump administration.

“A striking example of this narcissist grandiosity is the Catalan centuries-old and never-ending threat to opt for independence unless getting a better deal from Spain, a crude blackmail never recognised as such but as a demand for concessions. The implications are clear – their very membership is a favour granted by the Catalans to Spain, and independence is not a real aim but a mere instrument of extortion.”

This is, bizarre Russian meddling aside, the extent of secessionist talk in California: a fantasy intended to remind the rest of the country that it’s a political, economic, and cultural powerhouse that, on paper, out performs several European countries. It’s a fantasy that Pizzolo and Nahuelpan pop immediately, however.

As much as California is seemingly an entity unto its own, neither its urban metropolises nor its agrarian rural regions are self-sustaining. A modern miracle of irrigation had to be implemented for Los Angeles to come into existence to begin with, and the electricity crisis caused in large part by market manipulation by Texas based Enron is the most acute reminder in recent times of just how dependent the Golden State really is on the rest of the country.

With those facts in hand Pizzolo and Nahuelpan project a near future where the current standoff between California and other, mostly Democrat-controlled states home to sanctuary cities and the Trump administration — to the point that California attempts to secede to stop the forced deportment of its immigrant population, triggering a military occupation by the federal government. Adding to the chaos is the internal division within the state, breaking up into pro-immigrant resistance fighters, government allied militias, and the even more extreme sovereign citizen militias.

Despite the chaotic and violently repressive nature of the situation, Calexit projects an oddly hopeful set of circumstances for its dystopia. Unlike the feminist parables of the day like Bitch Planet and A Handmaid’s Tale that begin with firmly entrenched totalitarianism or the flailing mosh pit nihilism of Howard Chaykin’s The Divided States of Hysteria, Calexit is first and foremost about solidarity.

It’s impossible to know whether Californians en masse, even lead by the liberal urban centers of Los Angeles and San Francisco, would push support for its immigrant population to the point of risking a brutally violent invasion unless it actually happened, but the fact that Pizzolo and Nahuelpan have chosen to construct their world that way creates an opportunity for readers to consider and hopefully embrace the position, rather than cynically preach to them that they aren’t ready or willing to fight that hard for the marginalized.

They also chose not to, as Chaykin and several others have and will continue to, project a single and specific Reichstag Fire type event into the near future that will plunge the United States into a state of exception that will precipitate a slide into explicitly authoritarian rule. Maybe because, from a legal and political standpoint, argues Masha Gessen in the July issue of Harper’s Magazine, one isn’t likely to happen in real life due to the Trump administration not actually needing one.

Gessen posits there’s two reasons for that: the first, and most immediate, is that the state of emergency that George W. Bush declared on September 11th, 2001 has been renewed every September since. In fact, there have been roughly thirty simultaneous states of emergency in effect at any given time since 2009.

The second is that there is an arguably straight line of consolidation and expansion of executive power during states of emergency from the Sedition act of 1918 to 9/11, with fewer and fewer of the limitations of those powers being made available to the public.

As Gessen notes: “The fact that Bush and Obama did not utilize some of the more extreme possibilities of the state of emergency testifies only to their restraint, not to the legal limitations,” which means that the Trump administration has a vast range of untested executive power at its disposal before taking into account their own legislative agenda.

Instead of chasing that likely dead end, Pizzolo and Nahuelpan focus their core thesis around scarcity, stemming from the former’s observation of the Silver Lake reservoir drying up. As scarcity — fueled by late stage capitalism and the pressures exerted by climate change — increases, schisms between various populations will only increase, exacerbating conflict. Or, in Pizzolo’s own words, “The story isn’t really about fighting the government or seceding, it’s about taking care of each other when the center doesn’t hold.”

It’s that sentiment that separates it not only from most of its peers in dystopian fiction, but also from Pizzolo and Nahuelpan’s previous efforts at Black Mask, both together and separately. Their other collaborative project, the annually shipping Young Terrorists, is a gleeful thrill ride through conspiracy theory in the tradition of the Illuminatus! Trilogy. Nahuelpan’s solo effort Clandestino is a deeply personal and idiosyncratic evocation of the recent history of repression in Latin America processed through cathartic violence.

By comparison, Calexit finds both of them noticeably sharper and more precise. They’re anything but chastened or softened, refusing to compromise on the sarcastic humor and graphic violence that define their bodies of work, but there’s a clear commitment to precision in the narrative that reigns in some of their other impulses.

Colorist Tyler Boss stays conservative in his choices, overlaying the exterior scenes in the expected hues to evoke Southern California and meddles with it only to add emotional emphasis to particularly fraught situations. Nahuelpan, however, commits himself to a great deal of fine detail that he refuses to create a looser shorthand for, most notably in the protagonist Jamil’s tattoos.

This has the feel of a passion project for them both, but it’s a very different kind of passion on display. It’s a passion not to pursue their idiosyncratic interests to their own ends, but to open up their work to create a space for dialogue and action that the readers can take back into the community with them.

That change in approach is consistent with Robert Jones Jr’s exhortation not to name Trump and to move beyond catharsis as a means of combating his administration’s agenda. The Impossible, as Jones prefers to call him, is depicted only in deep shadow, hinted at in silhouette and syntax, evading the caricatures that Jones contends to be counterproductive and undermining to resistance efforts. Calexit’s debut issue, incidentally or by design, also adheres to Jones’ alternative path.

He posits that “Real change requires moving beyond mere catharsis. It demands the willingness to become as vulnerable as a child in Yemen with a drone bomb hovering above their head (a drone bomb we, by the way, paid for),” which Pizzolo and Nahuelpan endeavor to hypothesize in their depiction of occupied Los Angeles. The patterns of repression and violence Nahuelpan worked into Clandestino are mirrored in Calexit through intentionally faceless foot soldiers and the casual cruelty of a friend’s severed head being couriered to a family’s home immediately before a military raid.

They don’t stop there either. Where Jones identifies Congress, which he awards the epithet “Cult of Cannibals,” and more local forms of government being the critical, and perhaps only available venues for meaningful non violent resistance, Pizzolo matches him in the backmatter, by printing a series of interviews beginning with Reclaim Chicago’s Amanda Weaver, who lays out her pathway to becoming an activist in a way clearly geared towards providing clear and accessible first steps for readers to get involved in their own communities.

Just like the choice to offer an oddly hopeful pathway towards the confrontation that lead to California’s occupation, know to offer up a perfectly chilled can of LaCroix to wash down the harshness of the circumstances in the form of Jamil’s quips, biting satire, and breathless action.

The real showstopper of the issue takes place on the Hollywood Walk of Fame, where Jamil co-opts a Captain America cosplayer to skewer a government collaborator drawn to resemble White House chief strategist Steve Bannon and make a jab about Marvel CEO Ike Perlmutter’s relationship with Donald Trump.

Curiously, the main villain of the debut issue and the face of the occupying forces, whose mannerisms and dialogue evoke Inglorious Basterds’ Nazi Colonel Hans Landa, is clearly drawn to resemble the late Steve Jobs. While there’s no clear reasoning hinted at on page, Jobs’ likeness is most likely being appropriated to represent all of the tech sector leaders who have met with and potentially collaborated with the Trump administration, and the role of Silicon Valley technology in government surveillance and law enforcement, such as Palantir’s role in immigration enforcement. It’s a powerful metaphor that makes California’s entanglements and role within the country startlingly clear as the face of one of its chief exports becomes the agent of its own repression.

Calexit is the new face of resistance in comics, elbowing past incumbents and upstarts alike by prioritizing precision, clarity, and empathy over sound and fury.