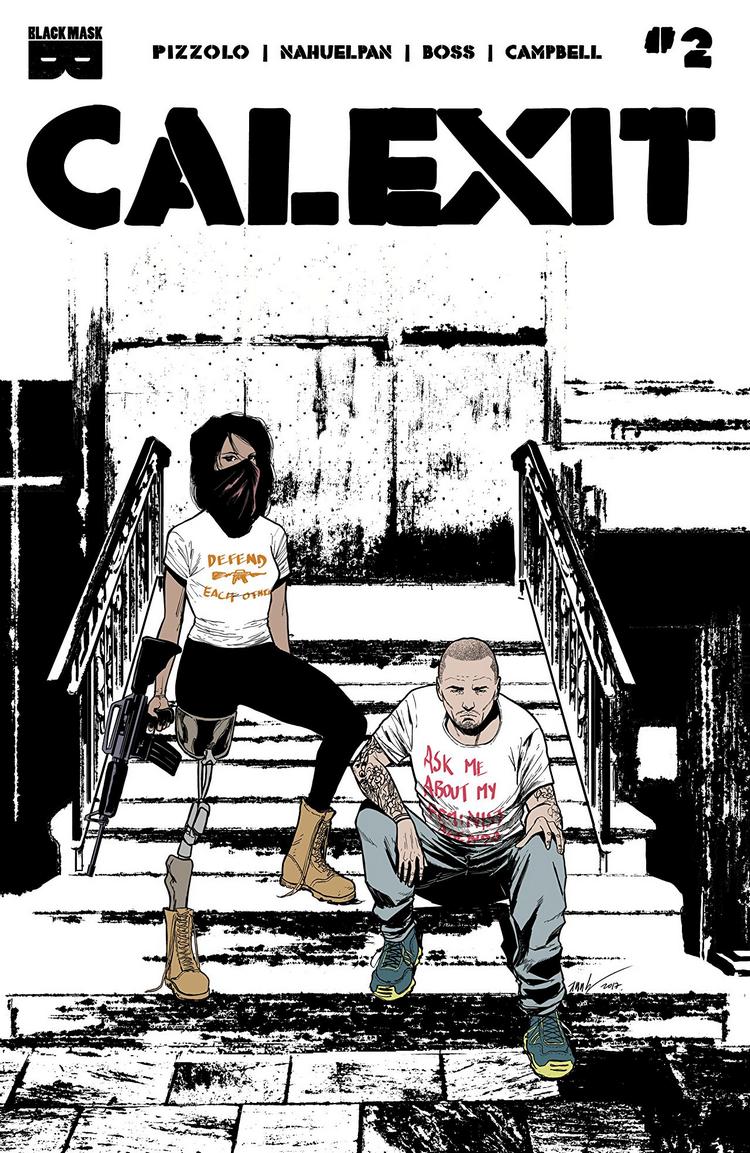 Living in Washington state during the era of our first worst president, I had to listen to a lot of old hippies talk up secession and the idea of “Cascadia.” Most of the people who dreamed of Cascadia did so because of Ernest Callenbach’s Ecotopia, a novel that hippies distraught over the sputtering failure of the ‘60s embraced in 1975 for its semi-utopian view of a new Pacific Northwest nation unified by principles like sustainability and civil liberties. Callenbach intended his novel to be an inspiration for the coming generations, something to aspire to but within half a decade Callenbach’s formerly starry eyed readers cashed in and made the Pacific Northwest a utopia for tech giants instead.

When the idea reemerged around the time of the Iraq War, many of the Callenbach dreamers were middle-aged and wealthy and picked up this talk of Cascadia without taking a moment to consider why it failed to take off when they were young let alone how the increasing divisions in the region made it far less plausible than it had been in 1975. The three core states that make up the idea of Cascadia— Washington, Oregon and California— all have the reputations of liberal meccas but anyone who has lived in them knows they are equally the home to meth camps and Neo-Nazi militias, libertarian tech misanthropes and volatile New Age cults, horse fuckers and serial killers, and that’s just a summary of my former home Washington. If there is one thing Matteo Pizzolo and Amancay Nahuelpan do best in their Black Mask series Calexit, it’s depicting this disconnect between the larger city dwelling populations that believe the region will unify after an ideological secession and the geographically larger, volatile populations that instead only unify against them, letting loose hostility they’ve felt towards the coastal elite for decades.

In Calexit’s dystopian near future, Trump has managed to criminalize the entire immigrant population of the US, prompting California to refuse to help enforce this legislation and to open its borders to those threatened by it. California eventually secedes, with its cities forming an alliance that stretches up to Vancouver, BC in one direction and Tijuana in the other. The international aspect of this leads to the US government attempting to take back California with the aid of local white supremacist militias. None of the alliances are entirely stable but the hate groups are kept in line by Father Rossie, an ominous government figure illustrated by Nahuelpan to look like Steve Jobs by way of Sin City’s silent murderer Kevin.

Calexit mostly focuses on the interactions between Rossie and the Bunkerville Militia in its second issue, emphasizing how fragile this alliance really is. Some flawed advice from Bunkerville’s leader Eddie the Chimp nearly got Rossie killed by the Mulholland Resistance in issue one so he returns to their LA HQ to make it clear in no uncertain terms that he’s disappointed. How, you ask? By ramming a pool cue through Eddie’s head and impaling him against the wall, handing the reins of Bunkerville over to Eddie’s ambitious lieutenant Crowbar.

Effective as this scene is for illustrating the precariousness of the alliances on either side of this civil war, it also highlights the precariousness of the technical craft of Calexit. The action in this comic often lacks grace and fluidity, resulting in storytelling that’s muddled and cumbersome. The death of Eddie the Chimp should be a shocking moment but instead it’s borderline goofy. One moment Rossie is swinging the pool cue at Eddie’s face, like he’s breaking it over his head, and in the next panel it has somehow gone through the back of his skull and impaled him on a stone wall.

The rigidity of Nahuelpan’s characters creates more tonally out of place humor, as everyone who witnesses this seems to be locked into a grimace, including Rossie, who may actually be incapable of any other facial expression. Since the Bunkerville crew are all skinheads, they mostly look the same too, so the result is a scene of grimacing delinquents and the scantily clad women who love them, staring at a turtleneck psychopath and the corpse of their leader, waiting for a beat to move them along.

You get the sense that more than anything, Pizzolo and Nahuelpan want this scene to function as a display of Rossie’s badassery. Rossie is the type of villain who feels compelled to constantly talk up his own villainy. He monologues to Eddie before killing him— and seems to give in to killing him mainly because Eddie dared to claim they were equals— and he almost got killed in the first issue because of that same monologuing compulsion (which came about after sending some Mulholland Resistance members the head of their leader’s father in a box because who doesn’t enjoy a good Se7en reference).

It’s not that the rest of Calexit is entirely nuanced but Rossie is so over the top in his mania his every appearance threatens to knock the rest of the comic completely off the rails. Curiously, Nahuelpan even gives him anime anger lines whenever he does something especially cruel, complete with ramped up colors from Tyler Boss to heighten the effect. Despite a perplexing attempt to humanize Rossie at the end of the issue, there’s simply no depth to this character because, to paraphrase the similarly unhinged Billy Corgan, despite all his rage he will never be more than a rat in a cage.

This is a pity because the theoretical a-plot of Calexit is far more compelling and also better illustrated, Boss and flatter Dee Cunniffe’s coloring moving away from the Miami Vice neon palette the LA segment has and towards the desert hues of an ‘80s Love and Rockets volume. This end of the story focuses on Zora McNulty, the rebel leader of the Mulholland Resistance, and Jamil, a “courier” hired to help her escape to Tijuana before Rossie can bring her down. These two characters are ideal representations of the true conflict within Calexit— the battle between those who have firmly chosen a side in the civil war and those who think they can stay neutral.

Jamil is the latter, an opportunist who prides himself on his centrism and ability to be liked by everyone on all sides. Unfortunately for Jamil, his attempts to placate both sides have landed him right in the middle of the war, first by delivering McNulty’s father’s head to their neighbors in issue one and now by smuggling Zora out as an attempt to redeem himself for this action, unbeknownst to Zora herself. This is the dilemma of the centrist in a nutshell— when people are fighting for their lives, inaction and neutrality is its own form of violence, no matter how you couch it.

Zora’s adherence to her cause doesn’t make her a pure political figure, though. Since issue one, Pizzolo has written McNulty as a brash and reckless rebel who not only gets her supporters killed because of her impatience but considers that a success of sorts. “If we fight, we inspire them to rise up and fight,” Zora explains in the wake of the battle with Rossie and his guards. When one of her lieutenants asks if that’s true even if the less fanatical supporters see their peers die, Zora coldly states “Especially if they see us die.”

Modern audiences might see this as a Malcolm X approach to resistance, but Zora seems like the type of rebel leader who understands that Martin Luther King’s “non-violent resistance” hinged not merely on abstaining from inflicting violence, it required its practitioners to constantly endure brutal acts of violence, preferably in public, in full view of reporters and cameras. Pizzolo’s willingness to put this ugly aspect of resistance front and center makes Calexit reverberate with historic impact, even if much of what surrounds it is paradoxically glib or zany.

This also has the perhaps accidental effect of connecting Zora and her supporters to the Bunkerville Militia they fight, with both entities viewing unnecessary sacrifice as publicity opportunities and a way to recruit. Maybe it sounds harsh or insensitive to connect the two, but we’re living in an era where the political leaders who were supposed to protect the marginalized have been too squeamish of fighting dirty to be effective. Leaders like Zora understand that when your enemy has thrown out the rules and has no qualms about fighting dirty, the only way to win is by getting in the mud with them, if only temporarily.

That said, there’s not much else in Calexit to indicate why Zora is so well-regarded as a leader, certainly not to the degree that parents would be willing to sacrifice themselves and their children to help her. Based on her actions in the first two issues, Zora almost seems like more of a liability than an asset, too impetuous to unify a resistance, too cold to win over fence-sitters. As Pizzolo reveals more of Zora’s past, hopefully the traits that inspire such loyalty in Zora will come to the forefront and she can stop looking and behaving like a mirror of Rossie.

And yet, even if that’s not the case, that speaks to the theme of insurmountable divisions guiding Calexit. Maybe Zora’s ability to direct Rossie-level ruthlessness towards the right targets is enough to make people trust in her simply because it stands in stark relief to the Jamil-style centrists. And maybe that will eventually cause Zora to go the way of so many rebel leaders before her, moving on from victory over their opponents only to inflict a new kind of horror on the people they were supposed to save. What would be more American than that?