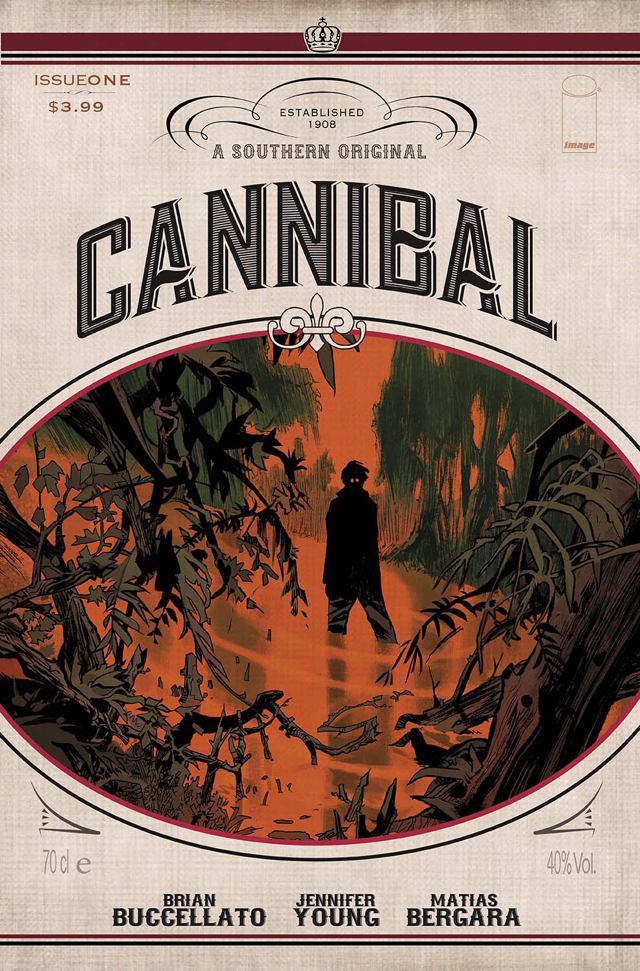 People eating people?! Unheard of! Just kidding…it’s 2016 and flesh-eaters are still in season. J. Young and Brian Buccellato present a slight twist on the tale, crafting a story about cannibals with a conscience. The somber story takes place in the Florida south, invading a sleepy town in menacing ways. Cannibal #1 comes from a talented team, with writing efforts headed by J. Young and Brian Buccellato (who also provides colors), and art from Matias Bergara, topped off with awesome Troy Peteri letters. Image is cranking out the first issues again this week, and Cannibal offers a strong entry to the horror genre.

Cannibal asks the question about what would happen if zombies weren’t merely flesh-craving, mindless brain eaters, but rather conscience-drive, flesh-craving brain eaters. The cannibals here were caused by a deadly outbreak of disease that surfaced from treatment gone awry. Cannibals are invading Earth, but haven’t yet reached Willow, Florida, a small southern town with it’s own fair share of violence. That’s all about to change as a cannibal breaches the borders and starts attacking the townsfolk.

The concept is interesting, though I think it will play out more fully once the people being infected have actual relationships with the characters in this story. Right now, the concept is merely in it’s introductory stages, and feels less important than the other small plot points in the story. When the first attack happens, things are pretty brutal, but like, the cannibal feels really bad, man. We don’t know a whole lot about the cannibals yet, and the people in the town seem intent on shooting to kill–for now that is. The action is fun, but the consequences seem kinda eh in the importance category so far. Young and Buccellato have spent some time building up the characters so that we care, but for some reason, it wasn’t quite hitting me as hard as in other stories with similar attacks. No one is truly likable quite yet, and I was having a bit of trouble telling the characters apart.

The premise is there, and I’m looking forward to seeing how it pans out. The dialogue feels true to the South and the story is generally paced well. The issue of depth to the story holds it back, but this may be the type of story that’s better in the long run with bigger payoffs. In the meantime, I’m enjoying the tense action. I’m also enjoying the gorgeous art in the story. While character diversity is lacking a bit, appearance-wise, the art is still solid and executed well. Bergara’s linework is clean, but also utilizes heavy shadows to punch up the emotional appeal. The characters are drawn well, expressions are powerful and move the plot along smoothly. The story is drawn out in an easy to read manner and each page bristles with activity. Buccellato’s colors complement the linework well, separating key elements while keeping the tone natural with a dulled, but pleasing palette. Finally, Troy Peteri’s letters are superb as usual. His unique font and kinetic letters progress the story in an exciting fashion.

Cannibal is a solid new addition to Image’s horror/action line-up. I’m looking forward to digging deep into the characters as the cannibals tear their lives (and them) to pieces. The concept should be fun as it continues to play out, and the book looks gorgeous. Cannibal #1 is entertaining through and through.