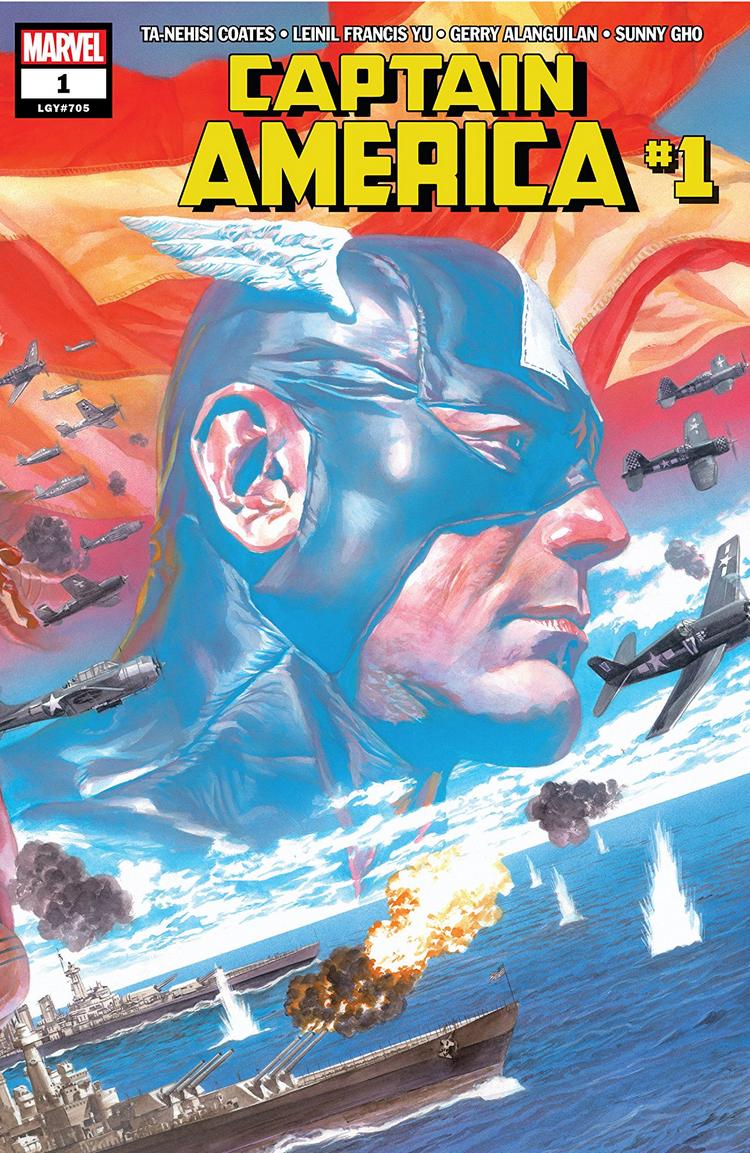 Being an American icon is a rough job when what you are, a symbol, gets tarnished. At the heart of Ta-Nehisi Coates’ is the idea that, no, America, a post-Hydra Marvel America, isn’t in great shape. While other books have come along which fill in much of the minutia concerning a post Secret Empire Marvel comic universe, Captain America #1 exists as a stage setting issue (obviously) that paints the landscape for what it to come. To his credit, Coates does a serviceable job, but there are a few issues with the story and how this book is put together that blunt the force of what is still a good book.

Let’s get the obvious out of the way: Coates is no stranger to allowing his works to touch on the politics of the period, and I for one believe that was why he is a good fit for a book like Captain America. From Englehart to Ed Brubaker, some of the strongest Cap stories have been rooted in politics, or at least political themes set within a fictional storyworld. Coates is clearly building up the concept of a post-Hydra USA and Russia eventually coming into collision, maybe not physically, but certainly thematically. Both are dispatching the remnants of Hydra in their own manner, but the tone with Russia feels more threatening. Certainly, his selection of Selene, The Black Queen of X-Men fame, shows that Russian saviors to the threat of Hydra are more prone to murder than what Cap is willing to commit to. After what The Supreme Leader used Steve’s face for, can you blame him?

Selene’s choice of inclusion however cannot be any more ominous than the return of Thunderbolt Ross to the forefront of the Marvel universe. His selection by ‘the new guy’ in Washington establishes Ross as a political player in what may well be a intriguing game of 3D chess with unknown forces, and with Cap as well. At the very least, Ross being in the plot spurs Sharon Carter towards a direction that is as intriguing as it is frustrating. Considering how long the false Steve and Sharon spent together, it could have been nice to see the true Steve reunite with her sans the growing clouds of mistrust over what it or isn’t her new confidential mission.

While some things with the issue are simply quibbles, like Sharon’s secretive mission and her relationship with Steve starting on the tone that it is, one thing is blatantly odd about this comic: the beginning was removed. I know the front portion of this story was published a while back as a Free Comic Book Day issue. Having read the FCBD issue, I would say that it provides just enough clarity with the plot to be important to read going into Captain America #1. At the very least, the chaos of the Washington National Mall assault is established in a more clear manner, as are how Nuke is used and depicted. Simply showing multiple Nukes randomly wandering around shooting civilians comes off as a jarring opening without the set up of the FCBD material. There are implications about one Spider-Man villain in particular being involved in this Captain America story that I am excited to see come to fruition, but people who only see this character revealed from the FCBD issue might confuse those who have only read Cap #1. The FCBD material also (sort of) blatantly paints Ross’ motivations (and who might have appointed him?) in a dubious light, but in time everything will be sorted out.

So, what’s great about this comic? Well, everything else. While Mark Waid offered a colorful, unique take of Steve Rogers after the events of Secret Empire, Coates really brings home Cap’s morally ambiguous, political-thriller tone, which I feel is where modern Cap fits at home best when there are other, brighter comics on the market to just show Cap sling’n shields and being hopeful (the current Avengers on-going comes to mind, for example). The tone is great, Coates is diving into a figure whose world was turned inside out and upside-down. Cap is being shown as hesitant to push himself, yet also anxious to not sit back and do nothing. It’s a good start, character-wise, so I am anxious to see where Steve’s emotional narrative goes from here.

And, hey, Coates also gets that, right now, we need as much optimistic Cap as thoughtful Cap. There are good moments of Cap saving civilians from disaster, offering reassurances to the fearful, and working alongside first-responders in times of chaos. With other comics and characters, some of these kinds of things could possibly come off as lip-service, but with Captain America it is the bread’n’butter. Coates knows what Cap fans are looking for and he provides it, alongside just enough ambiguous drama and establishment of pathos to make this reader interested in the future of the book and the characters who populate the narrative. I guess I just wish the first issue had been presented ‘whole.’ Still, such is why trade paperbacks are a thing!

The new tone is matched well by the pencils of Leinil Francis Yu, whose talents lent to the air of realism and intrigue that Coates clearly wants. Yu’s lines are often sketch-like and rough, as if the world is a painted over sandpaper. Yu’s ability to depict action sequences are top notch, as evidenced by the multiple sequences towards the start of the issue (and some at the end) which show Cap in his full acrobatic potential. One of the other qualities Yu brings to the table is, weirdly, his skill in depicting remains and devastation. From the decimated remains of a Hydra tank to the corpse-like husks of the soldiers who were inside, carnage and destruction are served well by Yu’s linework and aesthetic eye. The only downside might be in the capacity for Yu to convey faces in line with the kind of script Coates is bringing to the table, but then again this is a similar issue with many ‘political/intrigue’ comic: how do you ‘show’ what a character feels about inside clearly, without resorting to exaggerated faces or tells that might hamper the plot? To his credit, Yu does good work, especially with Sharon, and the framing of her and Steve’s tense dinner conversation is excellent. Of course, for those who read my reviews, I also love praising the work of colorists and inkers who bring the pencil work and script work to life. Coates and Yu couldn’t have a better partners than Sunny Gho and Gerry Alanguilan. Gho and Alangulian together provide the contrasts between rich darks and a more somber palette of colors that sell the tone of the book. Having said that, that doesn’t mean that Gho doesn’t know how to depict an explosion!

All in all, Captain America #1 might be off to an edited/pared-down first issue, but that doesn’t mean that the whole series won’t be excellent in TPB format or that what is here isn’t good.