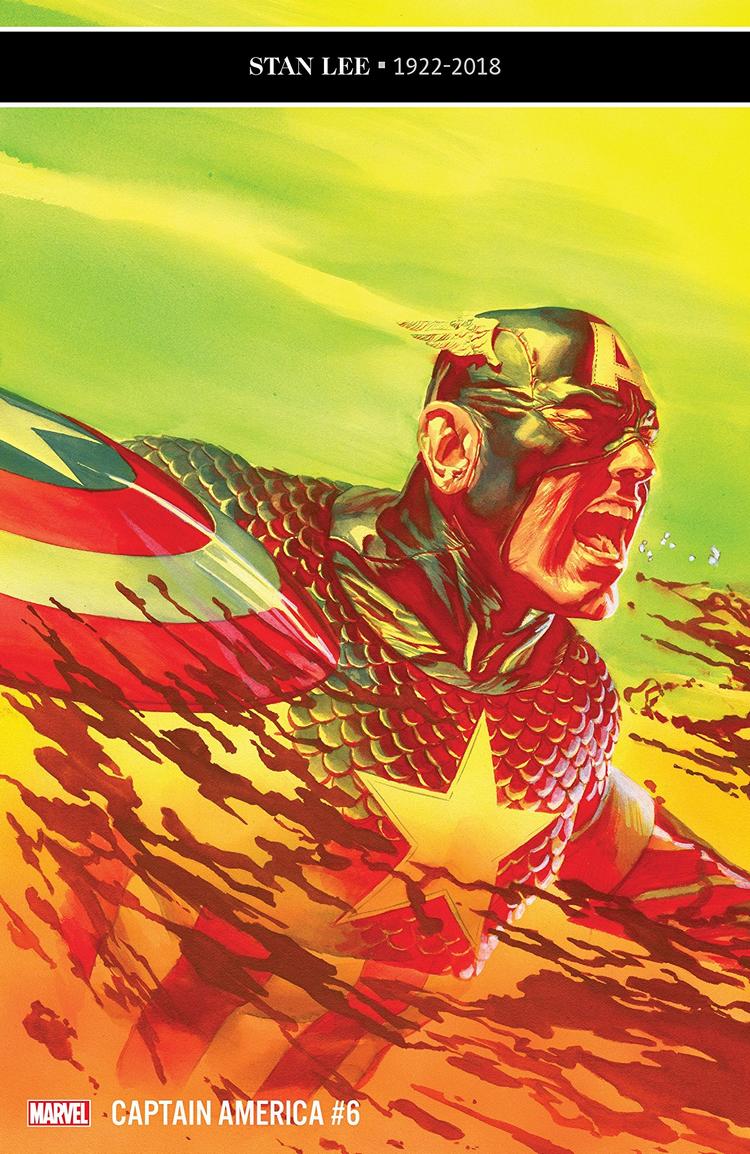 After six issues, the full force of the narrative Coates has planned for Captain America now, more than ever, comes into focus. Instead of an issue devoted to Steve (he’s present, but not for much), this issue focuses on Alexa Lukin and the recent resurrection of her husband, Aleksander. The focus on Alexa herself is what most of the issue fleshes out, and just in time. Comic plots seem to be enriched by either villains who are genuinely, undeniably diabolical or devoted to their ideals. The more “human” the ideal, often, the more tragic the villain. While Alexa Lukin is a new addition to the Marvel canon, Coates wastes no time addressing the origins of her abilities, her history with Aleksander, and what the first part of her plan is to destroy Captain America. Interestingly, Coates approaches the notion of what Captain America is in very symbolic terms, which is understandable: Steve’s dedication to the “Dream” of the USA has always defined him as much, if not even more than, his physical capabilities. All in all, though, the best thing about this issue have to do with elements involving the long-game Coates is building.

One of the first things to highlight as a plus for this issue is the fact that Coates is having the story move forward in a clear and direct manner. While Issues #1-3 were good for moving characters around, much of the plot was still at the stage where elements were hazy by design: who are the Power Elite, for example, was one question. Now, given some clues from this issue, we know more about their goals and how Alexa views them. The other additional plus is that this story is very much a direct sequel-of-sorts to Brubaker’s Captain America run. While the comic-book-ish “how’s-that’gonna-be-s’plained” nature of Aleksander’s “passenger” is certainly going to gum up some continuity issues, it’s very possible that the post-Secret Wars III nature of this continuity allows every problem with “how” Aleksander came back, and who he is famously attached to, to be dismissed. Personally, I love how utterly insane Aleksander’s return is, and all the problems that will come with it.

The second major bonus for this story is the added element of Russian mysticism which is manifest via Rasputin. Now, please touch base with me via Twitter, comic fans, but to my knowledge we have never seen the actual Rasputin in Marvel comics, right? Readers have seen characters, famous ones, with possible ties to lineage descendant from “The O.G.” Rasputin, but I don’t believe we’ve ever seen the man himself. His role here serves more as a way to fill in some gaps with explaining how Alexa is tied to Aleksander, but he adds a presence to the story which is rather intense. Also, his forewarnings to Alexa are great since Issue #5 dropped a great cliffhanger bomb on readers that we now know was something Alexa is either aware of and does nor care or is ignorant of due to her feelings.

Given that the nature of this issue is almost explicitly all dialogue from characters working from a place of slow motion (walking or sitting), Yu’s art gets to shine when it comes to faces and expressions. His line work on Alexa in particular is best manifest through a series of panels early on where she transitions from a stern, business-like manner to being genuinely happy. Alex and Aleksader’s faces are focused on closely, and much of the idea of intimacy between then that Coates needs readers to buy into so their arc can work is sold expressly because of Yu’s deft ability to show intense facial emotions.

While I have some minor nitpicks about why Steve and Nick were included in this issue at all, everything else is aces and this is a solid entry into both the Captain America canon as well as another solid piece of work from a fantastic team.