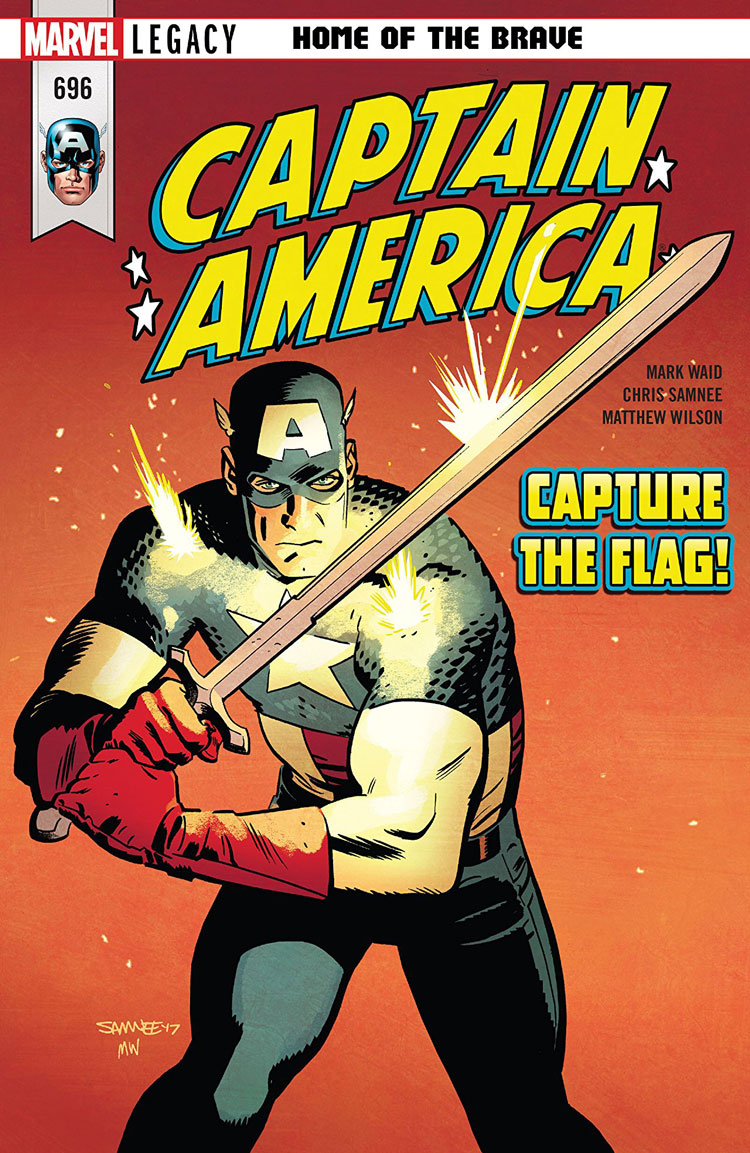 In case you missed it, Captain America is back under the direction of Mark Waid as of issue #695. While that issue was fantastic, fans of a more “ol’ fashioned” Captain America series than has been done in a while won’t be in any trouble understanding the plot of #696.

Cap is on a motorcycle traveling the USA while, apparently, trying to find a new home so that he can better get to know more of the people he understands that he should be close with. Considering how much of Cap’s history has been localized to the coast, Waid’s choice to send Steve into the Atlanta region is great. It places Steve in unfamiliar, yet still iconic “Americana,” surroundings, and it lets him have a one-off adventure.

If Captain America #695 and #696 are indicators of the ‘feel’ that Waid wants for this rendition of Cap’s adventures, “wholesome” is one word that springs to mind. These issues have been almost a straight-up re-exploration of all the things which makes a Steve Rogers story work: Steven finds himself in a setting where he is both humble, yet heroic. There is a villain who threatens a local population. Steve does what he does best and saves lives.

While Issue #695 focused on a resurgent group of Nazi terrorists in a small town that Steve once stopped in his past coming back, #696 introduces a new Swordsman. While there isn’t much to say about this new version of the character, Waid uses him as a standard foil to Steve in that he 1) wants to cause destruction to earn a huge payday, 2) he has a new twist on the typical arsenal used by previous Swordsmen, and 3) he is not explicitly complex. But, in Waid’s hands, even this somewhat vanilla Swordsman is still a great part of the story. He serves as a threat which Steve must confront and, in doing so, save lives. Because that is what Cap does.

Waid’s Captain America series can be defined by Samnee’s art as much as it can the more laid-back, easy-going style of the stories that have been released so far. Samnee’s bold and well-defined characters are presented in a style that is almost Rockwell-ian in their ability to capture “down home” feels.

From a diner which Steve tries to get some work in to the streets he passes by on his motorcycle, every inch of the pages in #696 is stylized and beautiful. Samnee’s line game is on point, and it also adds to the emphasis on action. Steve’s battle with the new Swordsman is depicted at one point through shadowed silhouettes and dynamic inked figures without color, and it works.

The bold lines and stylized expressions are brought to life through the simple yet vibrant color work of Matthew Wilson. While this comic is not one which emphasizes violence in any extreme way, Wilson’s subtle use of red for the blood of Swordman’s victims stands out as one of the more dynamic color moments in the book.

If you’re looking for a very easy to get into, almost all-ages Captain America comic, Waid’s current run is shaping up to be something Cap fans may well have been waiting for: a solid, fun series which captures all the heart and courage Steve Rogers represents both in and out of his Cap costume.