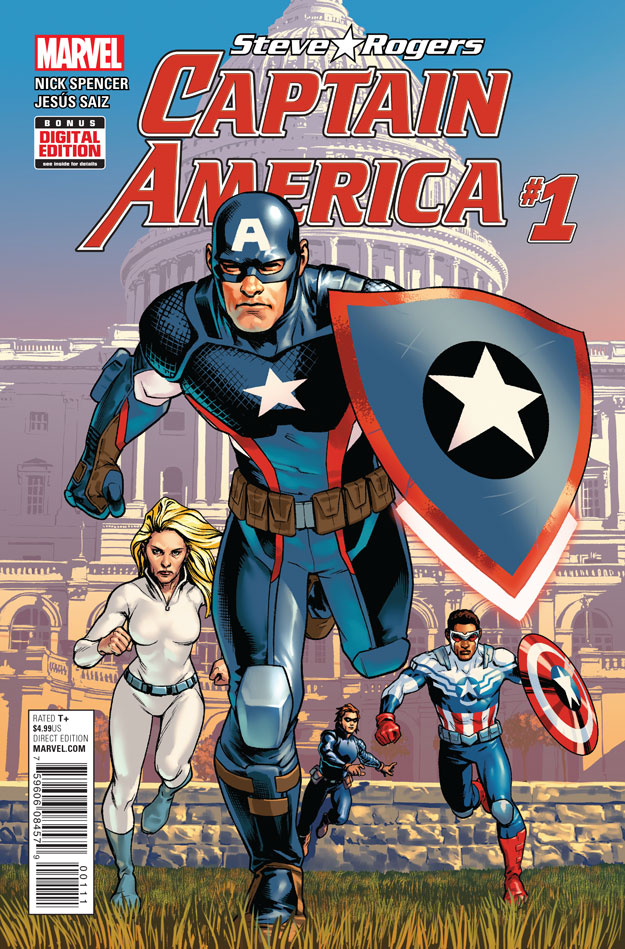 Those are the two words that end Captain America: Steve Rogers #1 and set the internet on its ear. It garnered an extreme reaction for the first chapter of a story that is, without a doubt, set up to draw attention, raise eyebrows, and spark conversation.

Is it gimmicky? Yes, it sure is. Is it a gimmick? No, I don’t think so. It’s a story idea, and one writer Nick Spencer has surely put some thought into. Hydra plays a major role in this first issue and almost becomes a character in its own right, as the Red Skull has now claimed control of the organization. Being the Red Skull, he has twisted it to serve his own purpose, and, for seasoned readers, Hydra has become something different. In the cinematic universe Hydra was an allegory for the Nazi regime. Now, in comics, with a former Nazi agent at the top of the power pyramid, Hydra is a group of supremacists. Again, a story that Spencer clearly has spent some time crafting.

The road to these revelations is bumpy and uneven, filled with heroic moments, clunky dialog, wedged-in backstory, and more dialog than properly befits a comic book drawn by Jesus Saiz. That is nothing against Joe Caramagna, who does a great job keeping the dialog tight to the edges of the story. Spencer simply fills Captain America: Steve Rogers #1 with exploratory dialog, rambling, plot-revealing monologues, and mission explanation that could sometimes be better set to simply play out through the story. I can appreciate the need for exposition, and I have no doubt I would not be able to devise a better method to bring potential new readers up to speed so quickly, but it seems as though Spencer is trying a little too hard to set a thick foundation quickly. It’s great that he’s set so much of Rogers’ new purpose and supporting cast as it make the story seem like it is already in progress. The result of putting so much in and providing so much detail is a dense read that handicaps the actual action of the story.

Making his first significant mark at Marvel, Saiz both draws and colors this issue, doing a much better job with the former. The latter isn’t terrible, but Saiz could refine and sharpen the range of tones and shading he applies. At some points in the tale, some of the Hydra agents take on skin tones not unlike their victims. Honestly, though, Saiz could leave the book at line art and I’d still read it to absorb his drawings. Many of his ladies have very similar builds, but Saiz compensates for that by giving them distinct facial features, hairstyles, and posture. He also draws a magnificent range of male characters, although Rick Jones and the suicide bomber could be mistaken for relatives if the word balloons were scrubbed from this story. Saiz has another shaky spot in Bagalia, as Zemo’s aircraft seems to be sitting on a different, angled, intersecting rooftop than the figures nearby.

Saiz’s artwork is iconic for the combatants. His Red Skull and Baron Zemo command attention in their panels and beg for more room on each page they appear. Steve Rogers is heroic and strong, idyllic and iconic in his own right. Saiz is clearly discovering his voice with this cast as the issue goes on, but as the issue goes on, the panels constrict his ability to shine. An extra-size debut issue is a nice start to set things up, and should be a great place to showcase the artist, but this issue struggles to balance those two concepts.

I would be remiss if I didn’t weigh in on the new Captain America uniform. Rogers’ new uniform borrows from the philosophy that spawned the costume changes in the New 52: busier is better. Except it really isn’t. It’s just busy. This extends to the new shield, which seems to have more in common with the Tennessee Titans than Captain America. Cap should be red, white, and blue. Simple and clear. Not multiple tones of each of those colors. It’s not terrible, it just seems like it needs to commit to being more of one ideal or another: is it a simplified version of his original uniform with some streamlined updates, or is it a complete departure, similar only in spirit? Hopefully the bumps will shake out of the art in upcoming issues and I’ll be able to digest the new uniform a bit more completely.

I’m intrigued by what Spencer is doing. This first issue is a bit jumbly. The story sparks are a bit bright. At the core, however, there’s mystery and action, excitement and possibility. I’m not going to quickly dismiss this series, but I do want to see this foundation firm up a bit. Saiz got my attention for this title. It’s up to Spencer to keep it.