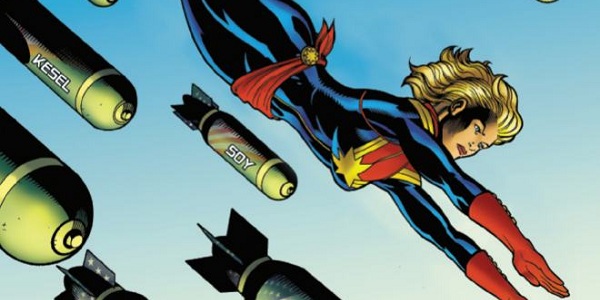 This comic book is a lot of fun.

Do I need to write more? Probably should. If I was given a single sentence to sum Captain Marvel #3 up, that would’ve been it. Kelly Sue DeConnick is doing a fantastic job with this series and is cementing Captain Marvel as one of the true powerhouses of the Marvel Universe. Carol’s voice is becoming stronger with each issue and, purely from a fan perspective, I love decisive and strong Carol. She’s running the show here, and it is great to read. The dialogue in this comic is fantastic. DeConnick has a knack for writing believable and fast paced dialogue extremely well. Her characters converse the way real people do, with nuance and emotion that is often lacking in superhero books. Most of all, it feels like DeConnick is having fun with these characters – her enthusiasm about the series and Carol bleed through into the script and give the book a great energy. I was somewhat skeptical in issue #2 about the time travel, but DeConnick is handling it in a controlled an interesting manner: Carol doesn’t get it, but she’s going with it. This leads to a really entertaining comic with a fun group of characters to read in the Banshee Squad. DeConnick’s storytelling has hit a great stride with this issue and I’m very curious to see where she takes the title from here. If the interlude is any indication, there is some interesting stuff coming in Captain Marvel.

Now, on to the art. Dexter Soy’s art on this series has been extremely polarizing, and, depending on the page, I have been able to see both sides of the argument. I don’t think it helped people’s judgement of his art when Terry Dodson penciled the “new” Captain Marvel over in Avenging Spider-Man, but I have to say that either Soy’s art is getting better, or it is definitely growing on me. Whether you like the style or not, it fits the story DeConnick is telling in this issue. His stylized take on Carol’s world fits with her new title and newly found confidence and I really enjoyed the art in this issue. It is full of attitude, which fits Banshee Squad perfectly, and Soy’s pencils during the action panels are excellent. I’ve heard his art described as “heavy metal” and it totally is, but so is this Carol. This issue, even more than #1 and #2, is a great marriage of script and art. As DeConnick and Soy continue to gel this is definitely going to be a title to keep an eye on.

Last words in this review are props to cover artists Ed McGuinness, Dexter Vines & Javier Rodriguez – this is a great cover. If I was in the business of picking top covers each week, this one is the clear winner of the 08/29 releases, hands down.