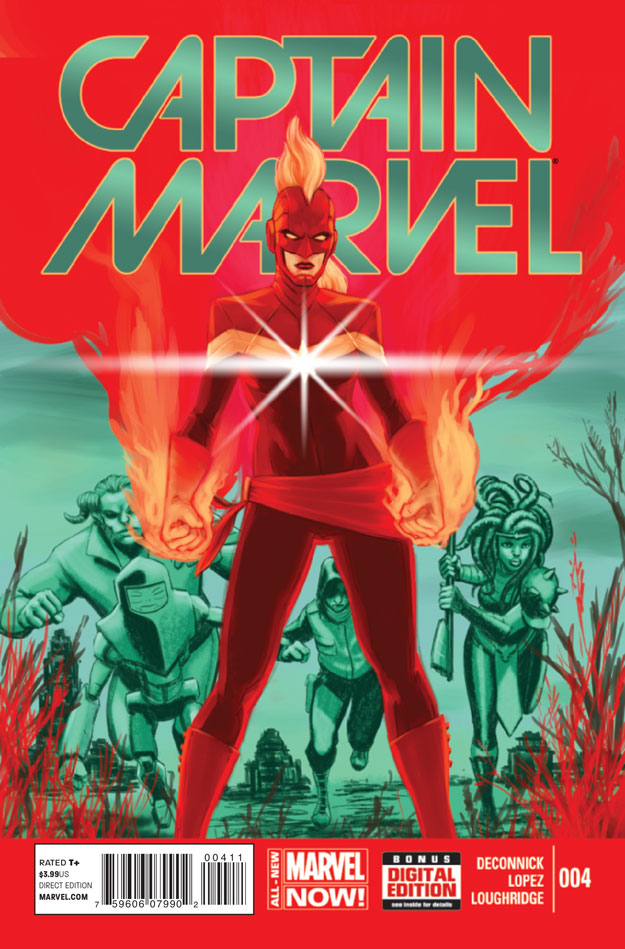 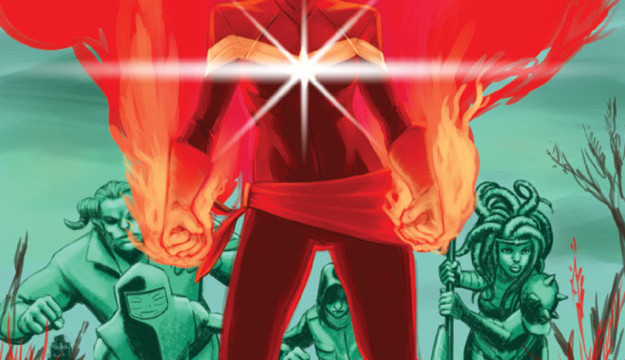 Captain Marvel is just a ton of fun, isn’t it? Sure, the subject matter isn’t the most enjoyable: political struggles that could lead to the death of thousands of displaced people from the events of Infinity, but Kelly Sue DeConnick’s unique voices for these characters makes this comic a riot.

DeConnick’s strength is dialogue and she is a gold medal power lifter when it comes to the banter in this comic. In this issue the story catches up to the parts of issue #1 where we saw Carol with her new band of misfits, an entertaining crew that bring a lot of energy to this comic. Carol and this crew truly are a merry band of misfits and these characters all work together very well. I highly doubt this is going to be a permanent cast in this book, but these characters highlight DeConnick’s ability to create side characters that readers care about immediately. Be it Kit, the Banshee Squad, or any of the new group, DeConnick deftly crafts characters that are likeable, believable and entertaining in a matter of a couple panels. The introductions of the characters in this issue never feel forced and by the end of comic it feels like a tight knit group of guerrilla warriors has been created. Considering this all occurs along side other plot lines, that kind of character progression is remarkable.

DeConnick also builds suspense well in this issue, digging into a political situation with Spartax Emperor J’Son that will inevitably complicate or become a part of Carol’s relationship with the Guardians of the Galaxy at some point. In the conversations between J’Son and Madame Eleanides, DeConnick plants some very interesting seeds to work with later on. J’Son’s voice is intimidating and powerful by DeConnick’s hands, and the gravity of the conversation contrasts the band of merry adventurers well. There is a lot at stake here, and this intense conversation adds an element of mystery that works well in Carol’s storyline. The skilled pacing of this story and the building of tension between the Spartax and the refugees has me caring about a situation in the Marvel Universe I never knew existed which is an accomplishment when you consider it has occurred over the course of four issues.

DeConnick’s strong writing is complimented by the best art David Lopez has delivered so far in this series. Lopez seems to be settling in on the series and he does a good job of making the personalities of the new characters shine through. Lopez conveys power well in the panels feature J’Son and while there isn’t much action in this issue it never feels like it is stalling. Lopez uses interesting layouts and shot angles during the dialogue heavy scenes to keep them visually interesting and intriguing. At no point does Lopez’s art look rushed or incomplete and his work is quite solid from the cover to the final page. The colouring by Lee Loughridge helps set the tone in the artwork, amplifying Lopez’s pencils to really drive the mood home. This entire creative team seems to be getting stronger by the issue and Captain Marvel is building some really good momentum through issue #4.

Captain Marvel #4 is a strong chapter in what is rounding into a very solid arc. DeConnick and Lopez introduce some very entertaining characters into a book that is inherently optimistic and fun. There is a real spirit of adventure in this comic, with Carol exuding an Indiana Jones style, dive-in-head-first, attitude (meant in the best way possible). Carol Corps members will be happy as can be with this issue and if the quality of the title stays as high as what readers are getting in issue #4, the Corps is going to be growing larger each month.