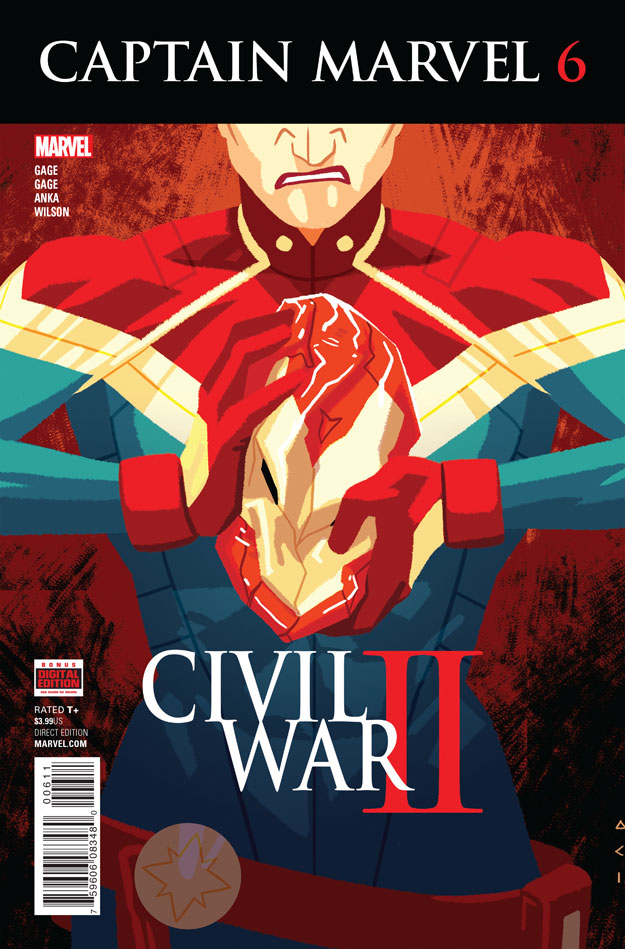 New co-writers Ruth Fletcher Gage and Christos Gage board Alpha Flight Space Station and give readers a succinct update on Carol Danvers, her mission, and her mindset. Captain Marvel #6 reads more like a #1 than a half-year (less double-shipping) mark. Everything a new reader needs to know is right here.

The Gages don’t simply fill Captain Marvel #6 with regurgitated exposition, choosing instead to broaden the story a bit, reach back into Carol Danvers’ past, and clear the edges of the horizon a bit, giving themselves room to grow in upcoming issues and storylines. The writers also manage this Civil War II tie-in and blend it into their story, rather than letting it supersede their direction.

The additions the duo bring in include Alpha Flight’s Board of Governors, which includes a crotchety, old antagonist of the Avengers as well as T’Challa (Carol’s teammate on the Avengers and the Ultimates) and another dozen or so emissaries.

One of the newer additions, Kree Captain Bar-Konn, alerts Danvers to the ongoing threat posed by Danvers’ frequent foe, Dr. Minerva. All of this layers in plots and subplots, giving the Gages plenty to work with. A visit from James Rhodes adds some heartfelt romance to the story, while Sasquatch and Puck provide a bit of levity before Captain Marvel #6 winds down.

Kris Anka handles the art chores quite nicely, but the front half of the issue is a little more noticeably detailed than the latter portion of Captain Marvel #6. His take on Carol is feminine and charming, a fine template for how this character should be handled by other artists on Marvel projects.

Some other characters are clearly more obedient to Anka’s plans than others, as his Puck has a distinct presence throughout while Sasquatch’s consistency waivers a bit, as Anka appears to still be figuring out how best to play Alpha Flight’s monstrous strongman.

Anka’s storytelling is still solid throughout, regardless of the apparent level of detail on the surface of his drawings, but towards the end of Captain Marvel #6, he favors shadows (mostly as the story demands) and gives colorist Matt Wilson ample opportunity to collaborate on the issue’s visuals around characters and through the battle with Minerva.

Caramagna’s work is as tasteful and sharp as always, and his character tags are particularly crisp, identifying new (to the reader) characters as necessary, but in a manner that allows both Anka’s and Wilson’s work to continue to breathe.

The Gages, Anka, Wilson, and Caramagna craft a nice chapter for Captain Marvel that is equal parts romance, adventure, action, and mystery while delivering a complete tale.

This isn’t the most gripping adventure Captain Marvel has ever endured, but it is a fine expository adventure for readers of all levels of familiarity with Danvers. Captain Marvel #6 is a concise, inviting first step. I can’t wait to see this team start flying.