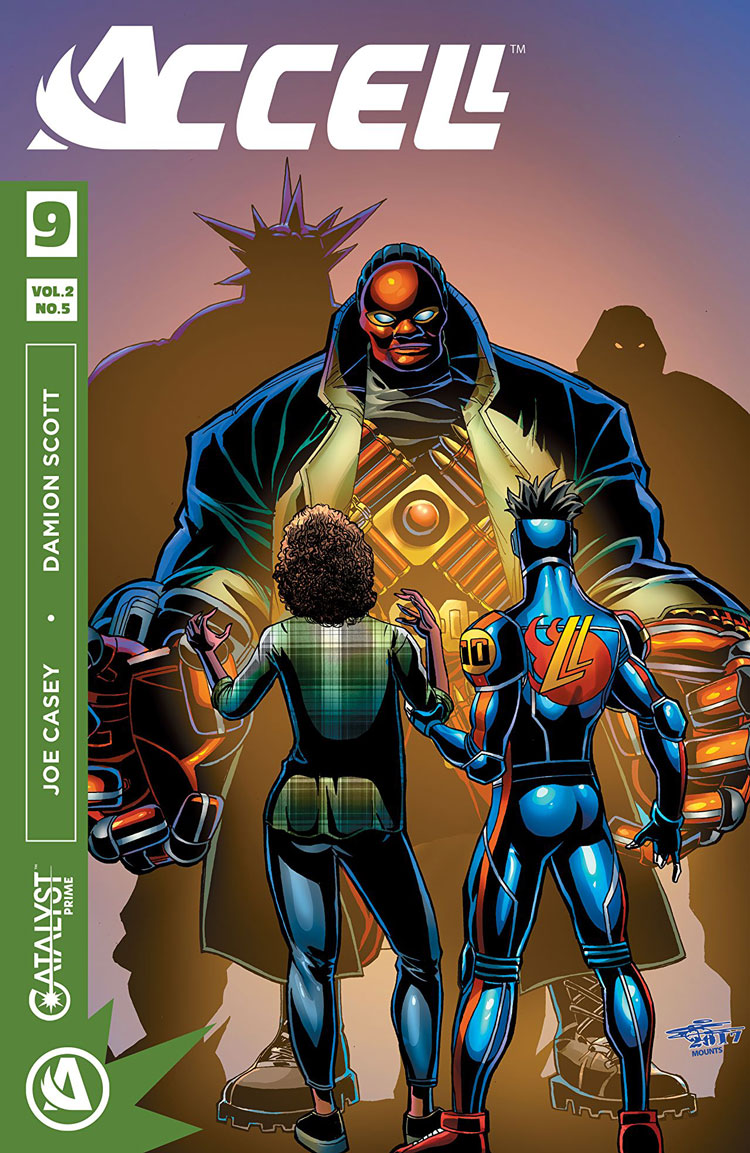 Daniel is back from Antarctica, but he can’t get the experience from the stream out of his head. Unfortunately, LA brings him back to reality as Monica runs into more trouble with daddy. But can Accell see past his own powers to help?

If there’s one thing in comics that drives me up a wall, it’s when artists don’t draw nipples on shirtless guys (I hereby dub this the “Ken Doll Syndrome.”).

If there’s two things in comics that drive me up a wall, the second is the un-interrogated trope of the “jealous girlfriend.”

Accell #9, you got both going on. And at least the latter takes what could have been an apt conclusion to the second story arc and just leaves me hating both protagonists in a super big way.

The dynamic that Joe Casey has established between Daniel and Monica is so grating, her insecurities and jealousies only outperformed by his willingness to put up with them ad infinitum. She’s become a literal caricature, one that I can’t even begin to muster sympathy for. He’s become the guy that stays for what seems like equally shallow reasons. And the mess it leaves on the narrative — which has otherwise been going to this fairly interesting metaphysical place — is difficult to look past.

The idea of Daniel’s interaction with the stream not being expressly speed-based is pretty fascinating, and it’s his intellectual curiosity about it that feels like it should have fueled the end of a volume punctuated by that exploration. Instead we’re left with this sense of shallowness from both characters that makes the more dynamic sci-fi moments seem less important to the story.

And that’s a real shame, because those are the moments where Damion Scott’s elongated artistic style feels right at home — as Accell is pinched and pulled in some other type of space (maybe not “space” after all, at least in our ability to comprehend). But that design quality doesn’t translate to the strangely generic 90s-style mercenaries brokered by Monica’s dad — a character whose motivation over nine issues is not much deeper than “be a bigger crime lord.”

It’s hard to see these narratives — fantastic other-dimensionality and stereotypical evil mafia daddy — posed next to each other, because ultimately the degree to which one speeds in my imagination is slowed down to a slog by the dead weight of the other.

As Accell enters its third volume in May, I’m not feeling all that confident about the narrative being able to extract itself from the stereotypes its employed to date, no matter what developments arise from exploration of “the stream.” But any movement in the direction away from the spoiled, jealous girlfriend trope would be a welcome relief.