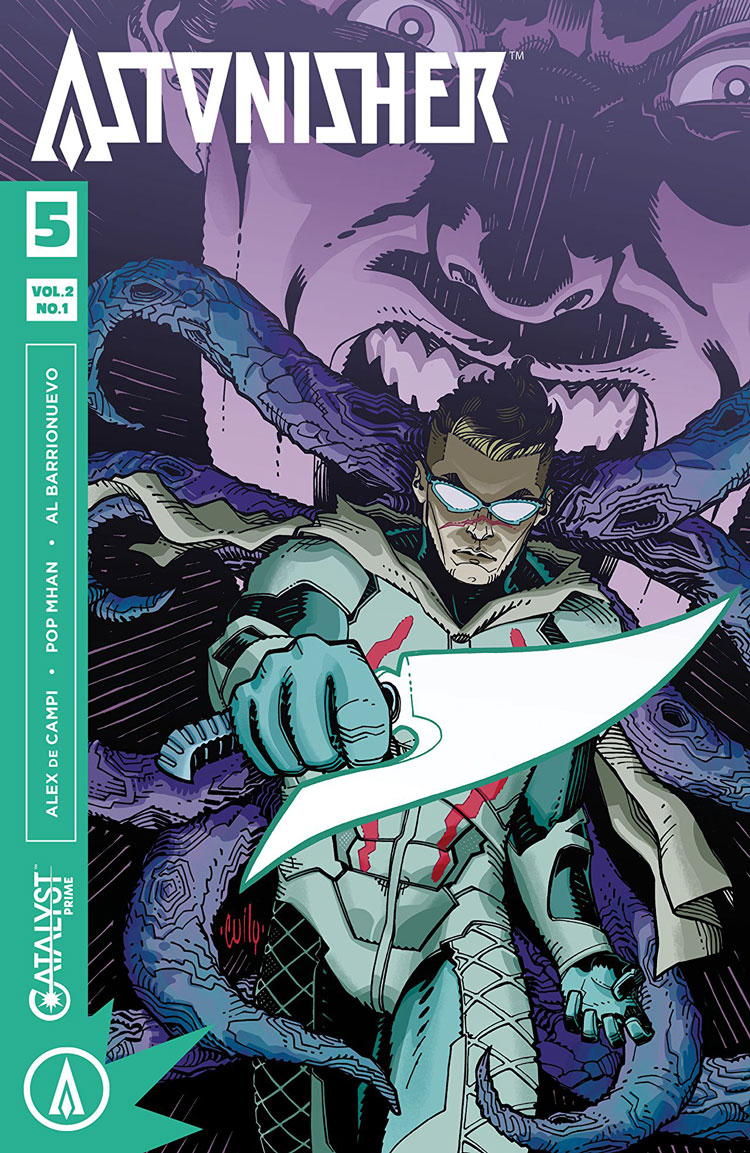 Magnus is now on the run, rescued from his forced hospitalization by Sasha (his girlfriend) and Adila (his mom’s PA), but still suffering the effects of using his powers. And they’ve gone to the one place that probably makes the least sense: into the hands of the FBI. Meanwhile, Magnus’s brother and Dr. Saperstein have something else in mind.

Astonisher is a pretty unusual book in the sense that, A) I could care less about the title character, and B) that doesn’t stop me from enjoying the book thoroughly as it progresses. It’s an interesting phenomenon, and one that happens so rarely, but to put it bluntly: Magnus is a bit of a waste.

He’s cocky. He’s untrained and sloppy as a hero. He’s barely altruistic. He’s practically dying. And he’s surrounded by far more interesting protagonists. Which is great. That I’m this invested five issues in on characters which, Sasha aside, could really use a lot more of the limelight is pretty phenomenal, and speaks strongly to De Campi’s development of their individual voices.

In fact, only three pages in across two issues, and I’m already really entranced by Isabella. Her disease — depression, anxiety, and agoraphobia — is so heart-wrenchingly characterized by the body language Pop Mhan provides, that I can feel the pain of Drew’s clench on her wrist. I can feel her desperation to not go along with the plan. And that dynamic is worlds more fascinating to me than the cosmic takeover that seems to happening to those exposed to the meteorite.

It’s a crucial scene, but it’s literally just the taste in this issue as art chores slide over to Al Barrionuevo — and things get hot. It’s not just that the action scenes are exceptionally choreographed on the page or livening up the narrative. I almost feel like a light has gone on for me with series, and I’m seeing the cast as fully developed people in space with Barrionuevo’s pencils and clean inklines.

Expressions are more varied. Facial structure and posture seem much more individual than charted out over Mhan’s last four and a half issues. And the physicality of a car crash and subsequent hand-to-hand fight feels so dramatically conceived and believably rendered in full three-dimensional space. This is what I’ve been missing on the series to date.

Valenza’s color work, particularly in rendering the post-dawn light in the latter half of the book, is stunning, and you can feel the volume of each person’s face and bodies by the shadows cast in two-tone color. It’s a perfect match for Barrionuevo’s weighty style, and a team-up I’m hoping flushes out the rest of this volume.

De Campi has pulled out all the stops this issue with a chase sequence that feels consequential, happening to a set of characters that seem assembled for a reason. With an art style that suits the book much more in my opinion — and an incredibly dope cover by Cully Hamner — I’m damn pumped to see where this sort-of X-Files meets Cloverfield adventure story goes next.