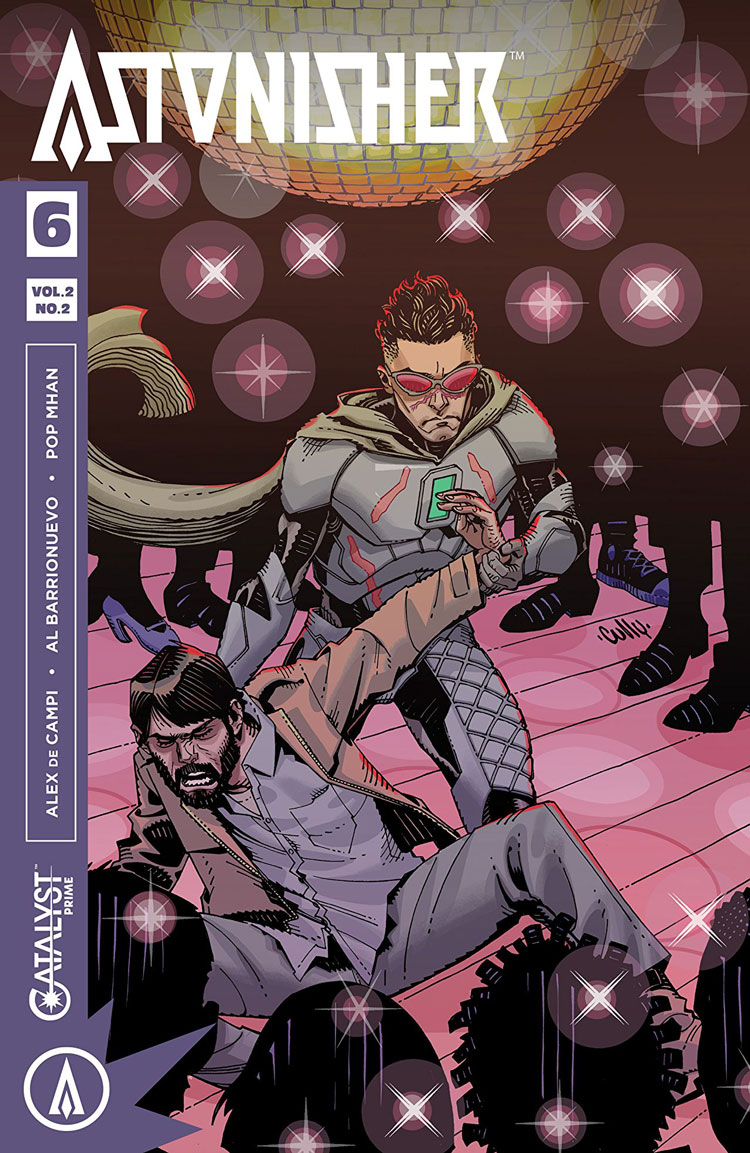 Magnus just barely escaped capture post-hospital break. So of course the first thing he does is beat feet to a very, very public nightclub. Along the way, however, he manages to save a very important life — and almost get caught all over again.

Magnus Attarian is a trip, man.

Somehow, after six issues, and countless annoying witticisms and bad behaviors, the Astonisher himself has managed to… make me like him?

Or rather, writer Alex De Campi has managed to make me much more sympathetic to Magnus’s flaws and able to take a prolonged peek at the vulnerabilities behind that scarred, but otherwise rich boy pretty shell.

Make no mistake. Magnus is an ass, and De Campi doesn’t shy away from that fact. But in issue #6, not only do we see his soft side — we also get to see him actually hitting a humble low as a result.

In terms of the former, it’s not saving Isabella’s life that illustrates Magnus’s magnanimity (heh). Anyone with even a sliver of a conscience should have done what he did. It’s the afterward, the comfort between them that he goes out of his way to extend that peels back the layer for me.

And in terms of the latter — Magnus’s own humbling moment at the end of the issue — it’s a rare time among a group of people that the hero in question doesn’t try to front or project. His apology and subsequent realization of the importance of what he’d done for Isabella is such a critical three-panel moment.

Artist Al Barrionuevo continues to portray these perfect character moments with a softness and reality that we haven’t seen in the book prior to his arrival. While he’s split sharing art duties (a trend I am NOT loving in recent weeks in Catalyst Prime titles) with Pop Mhan, I can’t help but feel Barrionuevo has been tapped to deliver the real pow and bam — even if Mhan is running on the action sequences.

From the interaction between Isabella and Magnus — and the stunning framing of the scene where Magnus finds her unconscious — to the sudden (and favorable) recasting of Agent Carter on the page as a young Idris Elba, Barrionuevo is firing on all cylinders. There’s a clean balance between ink thickness and shading, that allows Valenza’s colors to shine, where they just seem to get murky in Mhan’s sequences.

Volume 2 of Astonisher is already off to an impressive start, with De Campi and company firing on all cylinders in terms of character and emotion. It’s a far greater foundation for a book that’s delving into issues of mental illness than a lot of what drove along the early issues of Volume 1. With next issue moving into training, I just hope that we get to see Magnus, Sasha, AND Adila in action. (Psst. And maybe Isabella? Because she is fantastic.)