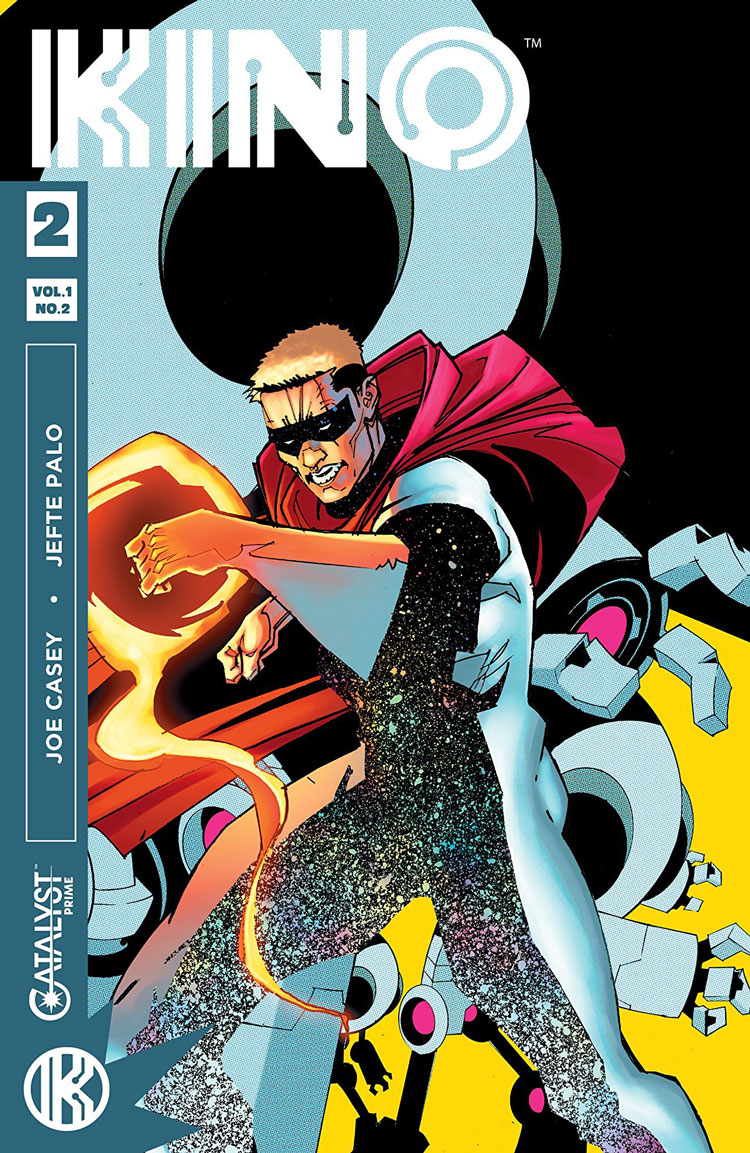 A third party has reared its ugly head in the game, capturing Major Alistair Meath’s not lifeless body and putting both MI-6 and the Foresight Corporation in a stand-off. Meath is now the subject of intense psychological reprogramming, using the KINO identity as a basis for an elaborate super-hero narrative. But what happens when KINO starts facing ideas and stories that could break his mind?

One of the things that’s so interesting about the Catalyst Prime universe is that while the protagonists (I’m not sure it’s right to call them all heroes quite yet) all seem to have origins that trace back to the same event, each book captures a very different flavor. Of all of the books I’ve dived into so far, KINO is actually the most surprising.

What looks from the outside like a standard Superman-style adventure is anything but, as Kino hasn’t even reached full consciousness in the standard sense by the end of issue #2. Writer Joe Casey has treated us to the beginning of a spy vs. spy tale with mad scientist underpinings, wrapped in the casing of a retro super-hero structure, almost as if the usual attempts at subversion were simply turned inside-out.

This isn’t a story of a super-hero whose surface Silver Age-style appearance belies a dark underbelly or secret origin. Exactly the opposite. Casey is cleverly inverting the idea of the post-modern darkening of super-heroics by layering on the more innocent, four-color adventures of a man named KINO onto this sci-fi world of corporate espionage, almost as if to reclaim something lost over time. A sort of naiveté, maybe?

But what gets even more interesting is when Meath’s psyche starts rejecting it — the very style of storytelling comic readers absorbed for decades. It’s a really interesting play on the retro story sequence.

All of this couldn’t be accomplished, of course, without the strong style artist Jefte Palo is bringing to the book. It’s odd, but it took my recognition of Palo’s retro sequences with the super-hero KINO to open up and appreciate the modern day sequences. The juxtaposition isn’t radical enough to make the issue feel like two different artists, or even two different styles, but the contrast of depth and perspective makes both narratives stronger individually and together.

For example, there’s so much sci-fi simplicity in Palo’s line in both the sequences aboard Assante’s satellite and in the retro imagination of KINO’s psychic download. And yet, his use of deep shadow and blacks in the former keeps it feeling much more ominous. Sotomayor’s color palettes — nearly three unique ones throughout the issue — work much the same way, just different enough to make distinction, but not different enough to feel abrupt. It’s such an important aspect to the read for me in terms of cohesiveness, but also contributes to supporting the nature of the story Casey is telling as well.

A real surprise high concept in what looked at first glance as a run-of-the-mill super-hero story, Catalyst Prime: KINO is well worth jumping on board right away. Casey, Pallo, and Sotomayor are delivering an interesting book that, like all the other Catalyst Prime books, stands on its own, but broadens the macro and the micro of the universe they’re building quite effectively.