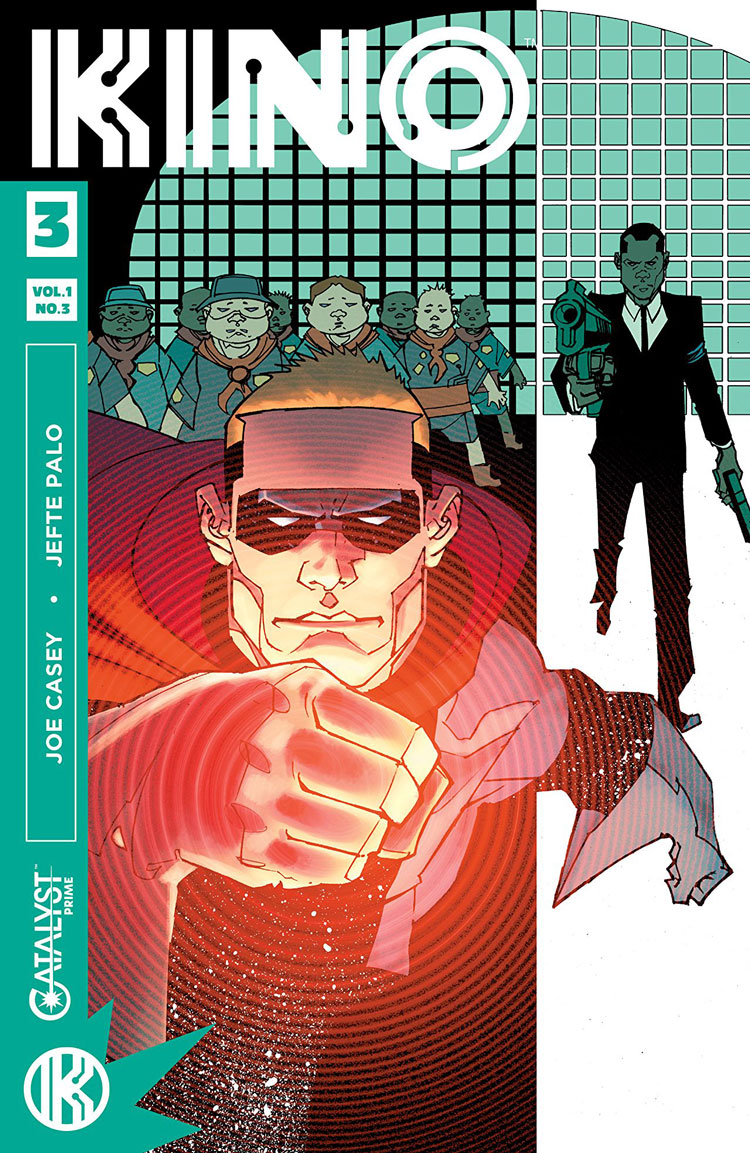 The experiment on the “dead” body of Colonel Alistair Meath continues, just as Lorena Payan’s team hires a mercenary to get him back. And Agent Gilmour narrows his gaze on Foresight’s history for answers.

Casey and Palo continue their double narrative of Meath’s journey — putting more chess pieces in place in the exterior world, and driving more traditional, if not “unhinged,” conflict in KINO’s interior world. Palo’s ability to flip back and forth with such distinction makes for a really charismatic read, giving the reader a sharp, almost geometric modern design for the real world, and a more classically retro look for the world of KINO, the super-hero.

For sure, Sotomayor’s colors fine-tune the difference with bright neon palette overwhelming the science labs and muted browntones dominating the so-called dream sequences. With rare exception (the bright red of KINO’s cape and the cub scout hankerchiefs, for instance), the KINO fantasy takes a backward glance at comics from the point of view of today — how we experience the history of comics, post years of acid stain on paperstock. It’s not actually how those comics were experienced at the time, but rather how we retroactively imagine them to have looked. It’s a nice touch for exactly what’s being inserted inside Meath’s brain, this vision of a world that never really existed.

Palo’s singular design for Mister Coal, this kind of minimalistic cyborg mercenary, is a stand-out for issue #3, with the full-page splash of page 2 being a genuine graphic design moment. The perspective, shot from underneath, and fall of shadow across his chest almost forming a clockface is just stunning, especially combined with Sotomayor’s cool palette contrasting with the bright red block of letters.

These monumental moments are worth gazing over for a while, but belay a little of the emptiness of the narrative on the exterior. True enough, there are three separate factions in the outside world who have yet to interact sufficiently, which is definitely a fight for page space in an already bifurcated book. But it’s leaving me a little impatient for movement forward, despite the compelling work Casey is doing on the back half of the book.

Nevertheless, there’s something to the horror Meath experiences as KINO when he experiences the cheers of the crowd to the decapitation and mutilation of child — albeit robot — scouts who attacked him. It feels like an important moment for the book, and a bit of a taste of the madness that feels like it’s overtaken Britain and America in the past two years. Nothing sacred. Nothing too far gone. Not even when you factor in the lunacy of super-heroics.

Ready to move into some integration, hopefully sooner rather than later, I’m still left with the deceptive simplicity of Palo’s line and the clever narrative Casey continues to provide in Kino #3. There’s a lot to appreciate with this book, and it feels like something that is going to read even richer as a collection.