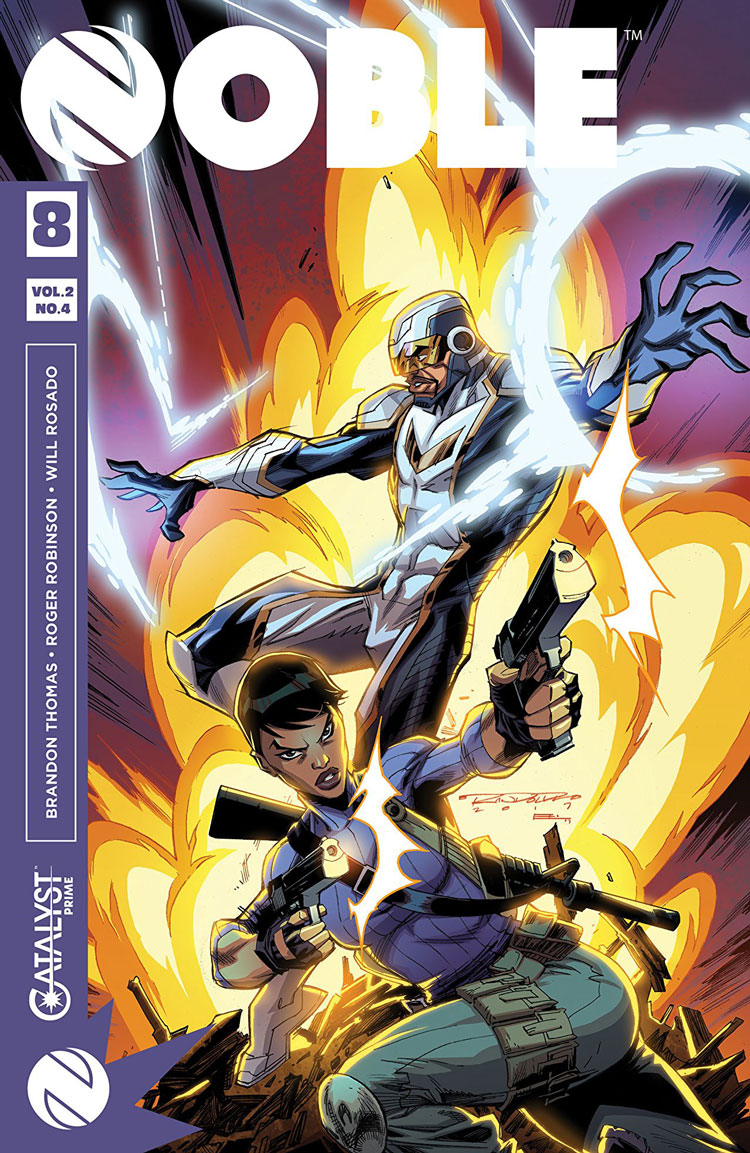 David and Astrid are finally reunited, thanks to — or despite? — Lorena’s interference. But the conflict isn’t over, as Doctor Mayes is left to be reckoned with, and Lorena’s solution to her antagonist’s assault ends up being more devastating than even she expected.

One of the things I’m starting to notice about the bulk of the Catalyst Prime universe is that the deeper you get into a narrative, the complex the characters become. And in Noble in particular — the title erstwhile villain Lorena Payan, CEO of The Foresight Corporation, is most involved in to date — one thing has become clear: there are no super-heroes here yet. There are no super-villains.

There are just people.

Make no mistake: David is unequivocally as noble as his name suggests, a genuinely good man thrown into a loop by his own powers and the machinations of his savior/boss. But what’s not clear yet is how that goodness will manifest itself, particularly with Astrid now at his side.

Likewise, it would be easy for me to take Brandon Thomas’s positioning of Lorena as proof of villainy, but with every turn in Noble, we get to see the side of a woman who truly believes she’s doing the right thing, and who, especially in this issue, truly cares about the people around her. Maybe it’s a classic version of “the means don’t justify the ends.” But what if they do?

What if Magneto was right? What if we had a Lex Luthor never undermined by his own ego and jealousy? But likewise, what does it say about a woman so willing to enslave others to achieve her ends? No more or less maybe than a man like Mayes who is willing to trade on marginalized pain to enlist soldiers to defeat her.

It’s a moral morass that feels strikingly fresh, particularly with characters like David and Astrid in the eye of the growing whirlpool. The writer’s deft handling of all four main characters’ drives and motivations has built a rich tapestry, even if some of the other figures, like Sebastian, remained somewhat underdeveloped and unexplained so far. But throw this interplay onto the canvas of action the book is developed on, and Noble feels like a comic with long term potential.

Roger Robinson’s work has grown on me over the course of seven issues, and while I’m glad to see Will Rosado handling some of the softer moments of the chapter, Robinson has a flair for movement and action that is really growing on me. In fact, his work is strongest when characters are clearly and aggressively in motion, feeling a little stiff in talking-heads scenarios.

But when the guns come a-blazing, and Noble’s powers kick in, Robinson’s sense of line and perspective is exciting. His first two pages in this issue, in fact, completely encapsulate the beauty of David and Astrid’s partnership (far more than a more suggestive scene later one), and feature a beautiful criss-cross of energy, movement, and focus.

This six page scene in particular is accentuated masterfully by Saida Telefonte’s lettering, especially the sound effects employed during the exterior battle. From the blams and krasshhhh to repeated kraks of Astrid’s machine gun, I’m finding these moments of typography so alluring. They completely make the scene for me.

A somewhat complicated moral narrative that’s getting down to its emotional simplicity, Noble #8, the penultimate issue of volume 2, keeps a lot of the questions I have had in play, but gives a payoff I’ve been waiting since issue #1 for. Thomas and Robinson have been building Noble up issue by issue, and at last, we’re getting some of the joy of the characters coming through, without losing the complexity I’ve come to admire.