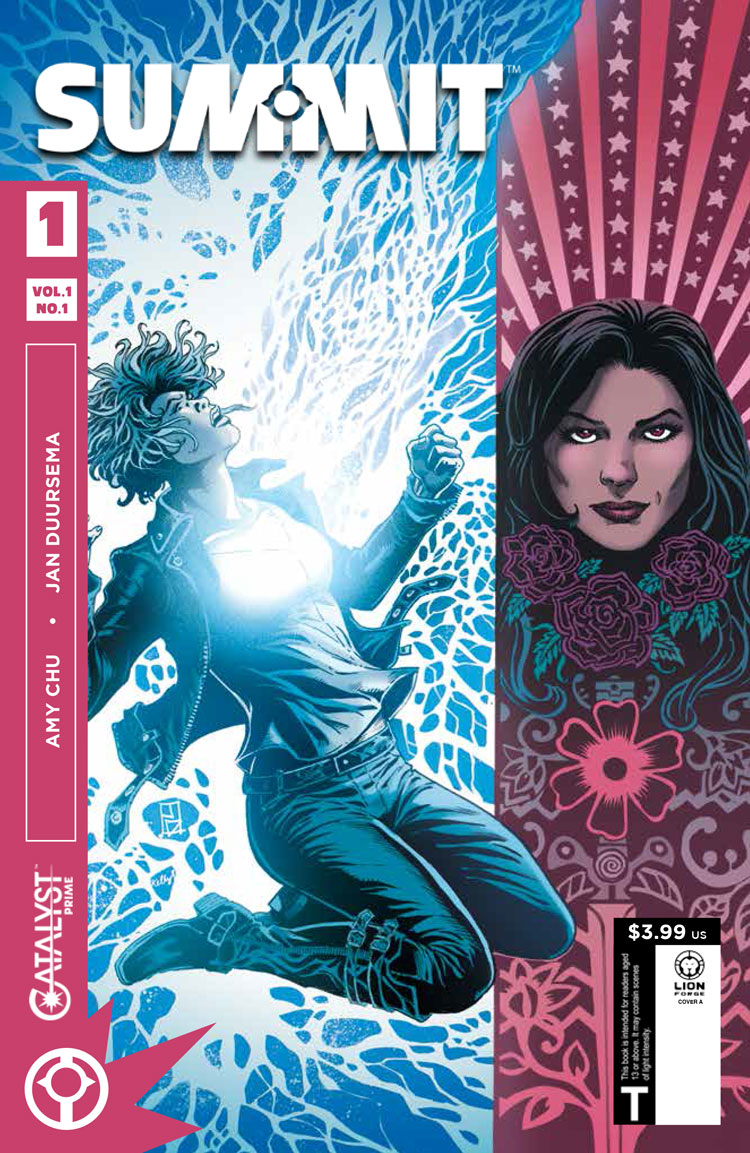 Sole survivor of a space mission that failed to stop an asteroid from hitting earth, Dr. Valentina Resnik-Baker doesn’t quite know why she’s alive. Or why her calculations didn’t work on board the shuttle in the first place. Haunted by voices, self-doubt, and survivor’s guilt, Val just wants to retreat from her former life, but the Foresight Corporation isn’t going to let that happen.

I’ll be honest up front, this is a rough issue #1 to review. As the final series in a launch set for a brand new super-hero universe that I haven’t followed every thread on so far, there’s a lot missing in terms of set-up and explanation. Having read (and reviewed) the Catalyst Prime: The Event Free Comic Book Day issue six months ago, I have a vague sense of Val’s original mission and who the mysterious Lorena is (who is never actually identified by role or last name in this issue). But there’s a lot unsaid in terms of the overarching story and fairly expected details that make this issue feel a little obtuse.

They’re the kind of omissions that make me think I need to go back and pick up the other series in the universe, but not presented in a way that make me want to.

Nevertheless, where Amy Chu’s writing does excel is in the subtle representation of a woman out of sorts, in mourning, and doubting her own expertise — and maybe sanity — as she comes to grips with the experience she’s had but can’t explain. Chu handles Val’s internal monologue deftly, giving us the sense of an incredibly intelligent woman who has a resolve to survive, even in the face of past disaster and potential present danger.

The exasperation Val presents, in daily life and the over-the-top show Lorena puts on, is measured, as Chu delivers this really strong sense of self-control. It shows up even in Val’s interaction with the ghost figures (and while I don’t quite understand why one living astronaut is there, but one dead one never shows, I trust that is a story point, not an omission), who she hides from the doctors assessing her fitness post-crash.

Jan Duursema finds Val’s countenance as far less than steely, with just the right amount of emotional reveal and withholding in every scene. Val isn’t hard, so much as composed, and it makes the brief glimpses of grief for her wife’s death that we get to experience — that Val lets herself experience — mean all the more.

The page layouts feel pretty standard, but some of the details Duursema draws into the environs stand out immediately. The elephant on page 4, Val’s cabin interiors, and the natural environs we see the protagonist escape to in issue #1’s final pages all have a strong sense of place and weight that helps bolster the emotional content of the issue.

As a book that feels like it could eschew the traditional rock-em-sock-em super-hero origin for a more nuanced, emotional awakening of power and mission, Summit seems like a book worth the time and investment needed to grow. Add to that a queer lead that could very well be the smartest woman in any room she’s in, and I’m loving the idea of what that character can accomplish and inspire. Chu and Duursema are thoughtful creators, and it shows in Valentina’s character. I just may need a little more grounding in future issues for the book as a whole to really shine for me.