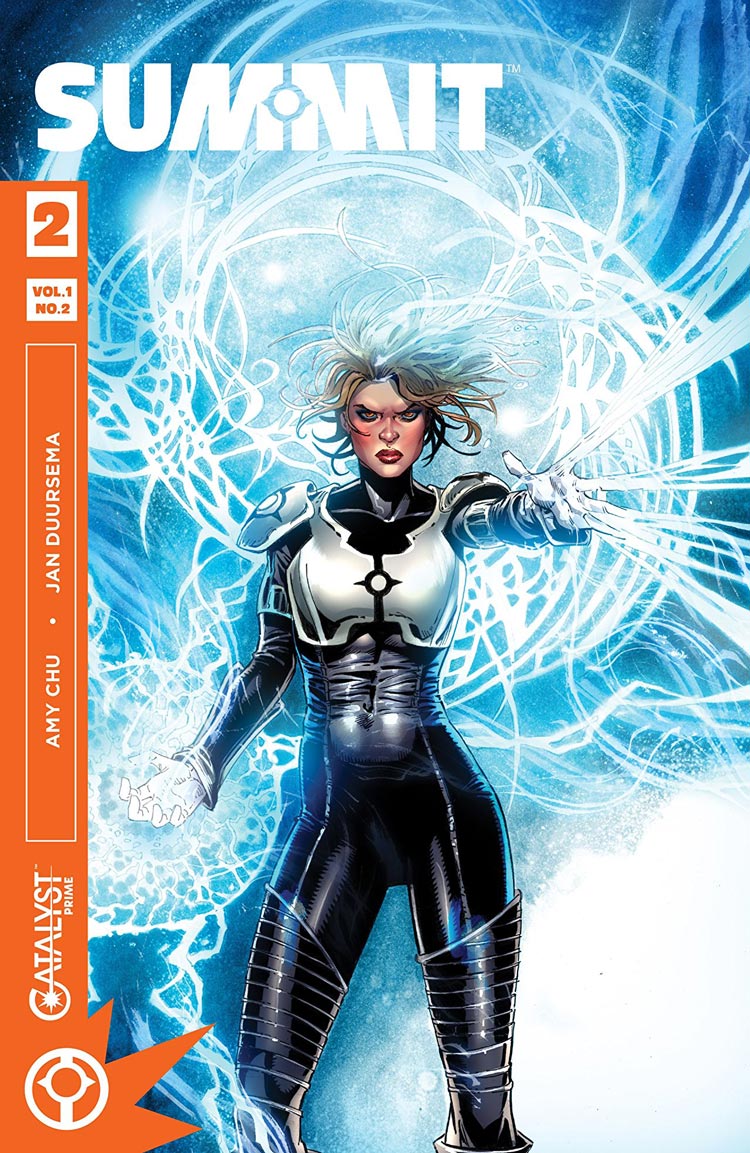 Valentina Resnick-Baker wants to be left alone. But with powers she doesn’t understand, a run-in with a former colleague might be just what she needs to get a grip on what’s happening to her. Just in time, too, as the daughter of a friend thought dead needs her help. Help that only Summit can give.

First issues are rough. I know as a reviewer, I judge them just a little harsher than any other issue in a series. They have to accomplish a lot, frankly. Introduce all the characters by name and by personality. Get the reader on the ground floor of what’s happening. Succinctly deliver any backstory necessary so that the audience feels “caught up” on the very first page.

Summit #1 didn’t really deliver on these demands for me last month, having been months since I read a pretty critical free comic that played into the story, and leaving a bit of the narrative aside for character study instead — on a character we didn’t really know yet.

But hold your hats, because Summit #2 is precisely the comic I was looking for — and more.

Amy Chu’s structure for issue #2 — taking a brief tour through Val’s development as a child, as an astronaut, and even as an adult who came out later in life — so strongly sets up the series and Val’s point of view that I very nearly was cheering as I flipped pages. We still get the very clear sense of Val’s temperament, her desire for privacy, and why a woman who suddenly has powers would agree to start developing moves toward being a hero, even though it’s not something she wants for herself.

It’s because she is a hero already, and has been meant to be one, as Chu clearly illustrates, from the time she was 8 years old.

I know what it was like to watch the Challenger blow up. I, like Val, am old enough to have been sitting in a classroom watching the launch as the worst happened right before our eyes. What Chu manages to relay in just a course of 4-5 panels surrounding this event is the sheer determination and grit Val would have her entire life. It told me more about the heroine in this series than the entire first issue. And amazingly, the revelations didn’t stop there.

Introducing JB, Val’s former boyfriend pre-coming out, is a fantastic tool for narrative, not because he in any way defines Valentina, but because he brings a sense of historical depth with,  his presence that Val’s dialogue can bounce off of. I know so much more about Valentina’s sexuality, her sense of loss, the depth of her understanding of science, and her psychological worldview because of the familiarity J.B. draws out in her in conversation. It’s almost as if the entirely of issue #1 was a closed book, and while that may have conveyed her desire to mourn, to isolate, it frankly didn’t expose anything else to the reader.

And I needed this. And Chu exquisitely delivered. I am invested in Valentina, because I feel like she can be invested in.

Jan Duursema’s linework is once again of the highest caliber, alternating between pretty exciting action shots (as seen in our exclusive preview) and more character-driven moments. The artist really captures Val’s inner darkness, particularly in her eyes, but clearly illustrates it as inner struggle and determination, not lack of compassion. The coldness Duursema creates in moments of refusal from Val feel like weight, and something to be funneled out. It’s a strong sense of stoicism, rather than distance, that I’m getting, and the distinction is really important to the character.

Paul Mounts’s color work strikes a great balance as well, keeping moments between figures at rest still feeling lively, even as power-driven action scenes burst off the page. The combination of his palette with Duursema’s sense of detail gives us a flush world to explore, and I am here for it.

Summit #2 is exactly the book I’ve been waiting on, providing the best introduction to a character I really want to read yet from the Catalyst Prime Universe. Its subtlety in characterization is backed up by a narrative framework that delivers everything I need to care about Valentina Resnick-Baker, now and for a long time to come. Brava.