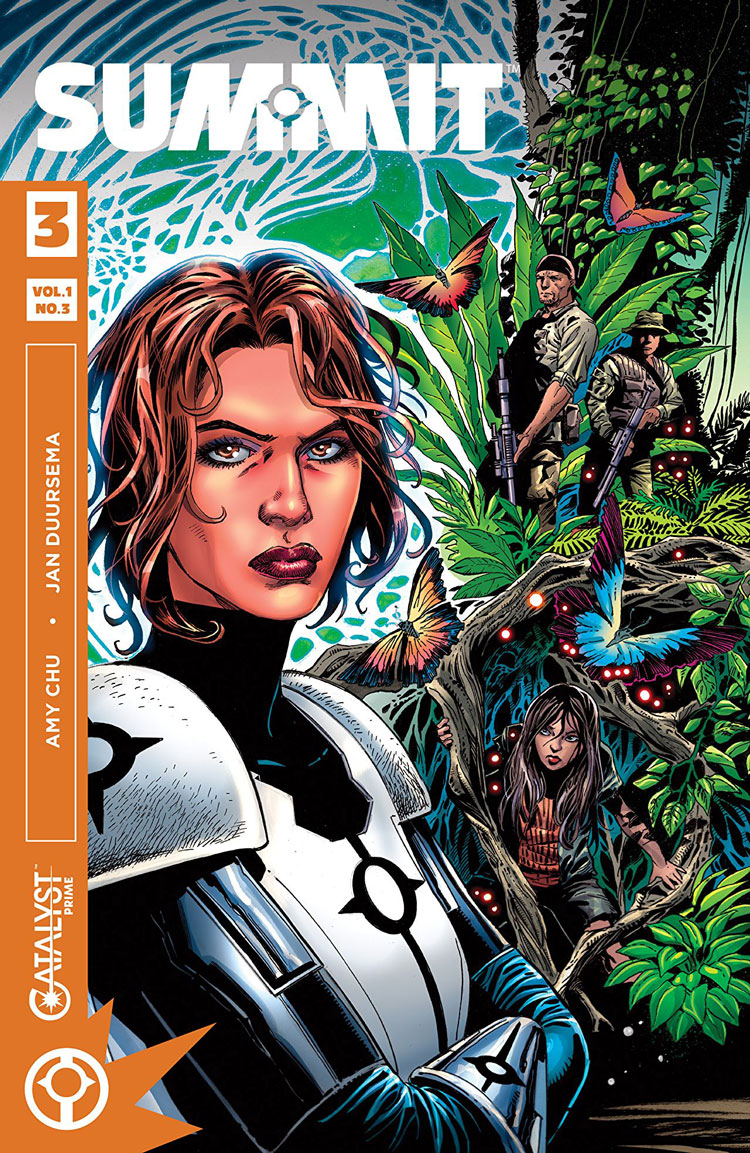 The message from Fiona activates Val — in more ways than one — to mount a rescue mission in the heart of the Peruvian jungle. But before she can drop into danger, she needs to suit up. Summit has arrived.

Amy Chu has built a tough challenge for herself in Valentina Resnick-Baker.

Val is not a wellspring of emotion, and in some ways feels like a push against the trope that men are naturally intellectual and women their empathic parallels. It’s a great undercut to that stereotype, reinforces the kind of ferocity one needs to have in order to be the kind of hero Val was on her suicide mission, and also runs counter to a lot of portrayals of queer women (and men) in comics generally.

It also makes for a fairly inscrutable lead character.

But by this issue #3, Chu has made her case for Val’s stoicism, and it reads deep, rather than shallow. It’s part of what felt missing in issue #1 (or maybe, it was there already, but I wasn’t ready to see it), but culminates powerfully in the first three pages of this chapter. Val’s heart-to-heart, so-to-speak, with Kay — prior to leaving on the mission that would flip the tables and leave her alive and her lover dead — sets up so much of how to read between the lines on Val’s behavior.

And ironically, I think it’s placed perfectly in the narrative. Any sooner and it wouldn’t have had the emotional resonance it’s had for me. Any later, and perhaps it would feel like a “lost chapter” rather than a very real facet of what’s happening at this very moment in Summit’s development.

Duursema captures the analytic nature in Val so perfectly, without giving off any sense that the hero herself is cold. She is clearly not. Her urgency for Fiona’s safety and own determination to get on with the mission is a hot motive, but one that radiates heat rather than sparks into flame.

As in previous issues, the artist captures the environmental detail as critically as the body language and make-up of each character. There’s no question of the uniqueness of the Grand Canyon (I can attest) or the Peruvian jungle (I cannot), any more so than that of each member of Val’s new support team at M.I.T. It’s not just that these are diverse representations — they are specific individuals, in look, dress, hair, personality. The whole nine yards. And that is a true artistic gift.

I also have to give Chu and Duursema props for channeling Lord of the Flies in Fiona’s dialogue and physical behaviors. For a classically “boy-ish” tale where devolution of civilized behavior is the overriding theme to be juxtaposed to Fiona’s own intellect and ingenuity (and internet savvy) is a nice play.

Once again, Summit stands proud as my absolute favorite of the Catalyst Prime line, both for its sophistication and thoughtfulness in developing a wonderful new set a characters to enjoy. Chu and Duursema are really crafting some magic here, amid the science, and delivering a queer woman hero I’m excited to read every month.