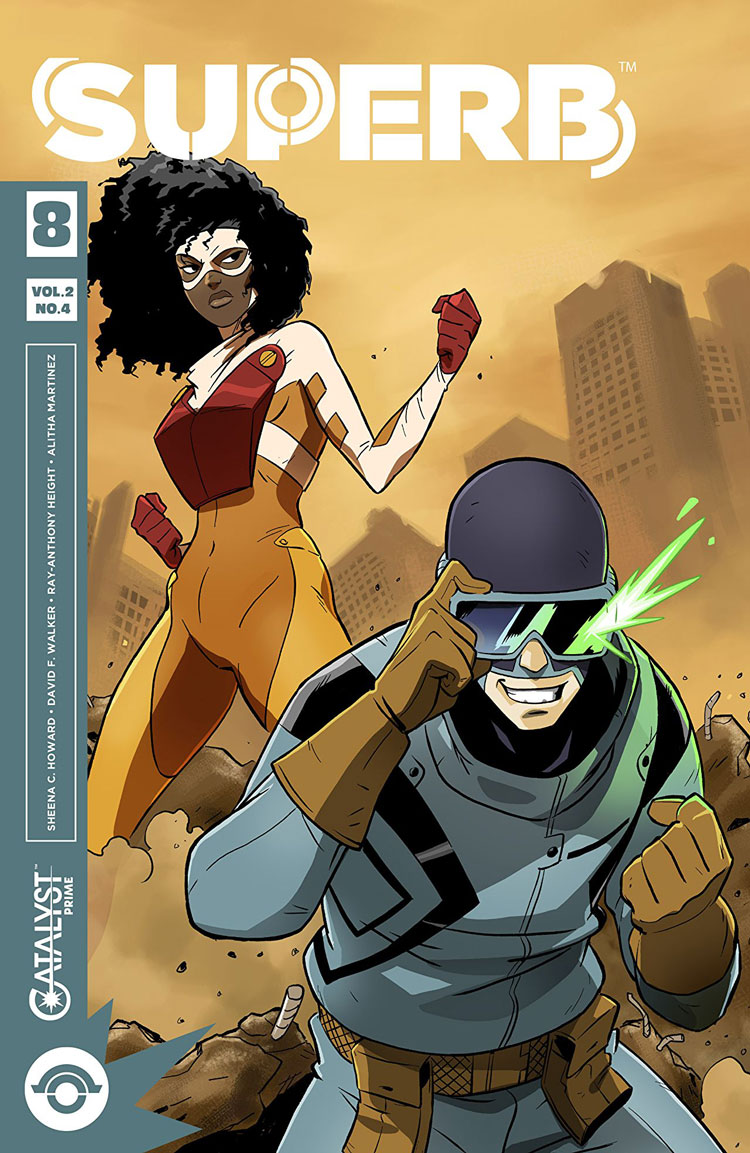 Fight fight fight! It’s all-out punches and kicks between Cosmosis and his team and the Foresight strike team. And it ends with a bang. A really really big bang.

There’s not a lot of room for character growth or meaningful moments aside when you’re busy getting your face kicked in. That’s more or less the feeling from the entirety of Superb #8. People get punched. And that’s OK.

As a bridge issue to the finale of volume 2, where Cosmosis and Amina finally get on the same page and forge their bond with Abbie, the tech guru they both desperately need, Superb #8 isn’t chock full of insight or much in the way of development. But it does have the strong feel of what happens when super-powered teens are dropped into a pissing match with each other, with deadly consequences.

In that sense, the narrative behind this chapter fits really well into the overall structure of the arc, which feels to me like an exploration of what really happens when you drop super-powers on a couple of kids. It’s dangerous. It’s messy. Even the ones who believe with great power comes great responsibility are going to fuck it up. And that’s real. Howard and Walker aren’t developing fantasy with Superb. They seem able to capture the reality behind things as crazy as a kid with eye beams and keep the believability grounded.

Likewise, the short-sightedness of the adults in charge is so painfully real, I can’t help but wonder if there are specific inspirations. The dude in charge of the rogue elements of Foresight (although how rogue do you have to be at Foresight to run a covert op with villainous intent?) looks like Rex Tillerson flattened out into 2D space. And that he’s sent children to fight children and simultaneously laments the injuries on “both sides” is so deservedly cringeworthy in all the best ways for the narrative as a whole.

Where things get a little crunchy in this chapter is in the heavy-handedness of Lebeau Underwood’s inks on Height’s pencils, leaving a bit of a gulf between their work and the pencil/ink combo Alitha Martinez delivers in the second half of the book. There’s a few panels that just feel so torturously over-inked, with shadows drawn across faces that make you think the light source is a 1,000 watt light from above. It distracts a bit from Height’s otherwise strong action sequences, that pit Amina in particular against Corinna. What should feel more fluid ends up feeling heavy and dark.

Martinez has a great sense of layout, but her interactions between the two young women feel much more awkward, with contact made and the resulting poses not fitting together quite right. The lighter inkwork does allow Gandini’s colors to shine more effectively however. The action still feels like it takes place at night, but the four color nature of the heroes and villains get a little more chance to shine.

Howard, Walker, Height, Martinez, and company are delivering a remarkably consistent narrative with Superb, but the book as a whole would be better served with a lighter touch on inks, and an attempt at more consistency from page to page. That said, nothing beats motherfucking Abbie with a grenade-launcher, so I take my pleasures where I can get them.