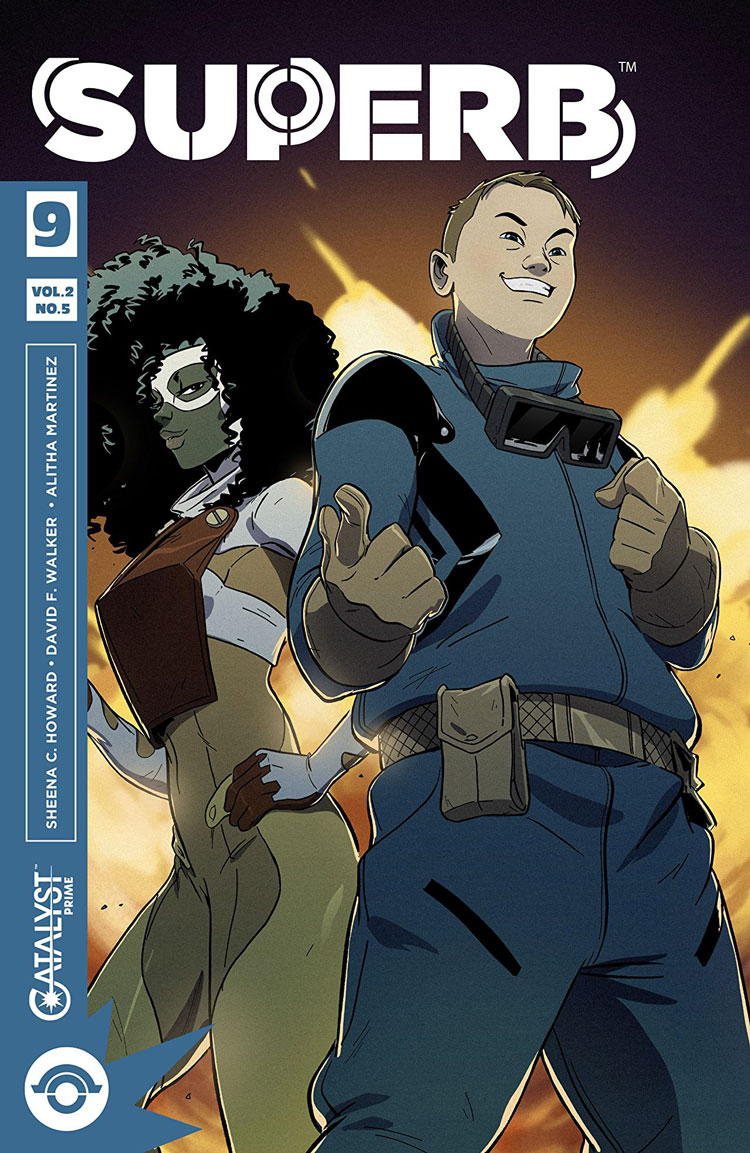 The battle is over for Kayla and Jonah, but the war is just beginning, as betrayals appear left and right. Abandoned and panicked, the superb duo could rise to the occasion or fall apart when up against the mastermind of the Catalyst Prime universe.

With the final issue of volume 2, Howard and Walker seem determined to strip the characters back to their essentials, effectively reintroducing them to the reader. It’s a tactic I’m finding little fault with, especially as a lot of the Catalyst Prime books are infatuated with “in media res” narrative — i.e. dropping right into the action without explanation.

It’s been a bit of a fault for me line-wide, but not one I particularly felt was daunting with Superb. Maybe it’s because the characters wear their histories and motivations on their sleeves. Even before this issue, readers knew Jonah was the idealistic super-hero. We knew Kayla was the one thrown into the shit and just wanting to scrape her way out. So, in reading that voiceover confirmation from another cast member — one who now seems to have betrayed the team — it allows us to focus right in on her motivation, and truly feel the pain of that betrayal, and the subsequent ones.

I’d be shocked if anyone had uttered even a gasp when Corinna showed her true colors. She was an evil little kid in the making from the start. But the emotional tunnel Walker and Howard have dug in issue #9 just gets deeper and deeper with every revelation, and you can feel it as Jonah sinks further into guilt and self-doubt. What we’re left with, at the end of a volume, is a stark dilemma, and a narrative twist, that effectively closes out what has essentially been a single escapade and opens up a brand new status quo.

Alitha Martinez on the whole provides that sense of sinking fortunes as she and inker Lebeau Underwood keep Jonah’s body language in line with someone who is beaten down physically (of course) and emotionally. Even in his rallying moment, Jonah appears slumped and downtrodden, further reinforcing his true nature as a selfless hero.

By contrast, Martinez and Underwood shift Kayla’s facial expressions and posture from panel to panel, almost giving a panicked, confused feel to her behavior — which is precisely in line with Walker and Howard’s characterization as narrated. The only shortcoming in a lot of these pages is faces start to morph oddly, particularly Abbie’s, as if the proportions keep shifting from panel to panel. In an issue that depends somewhat heavily on repeated talking head shots, it becomes a little distracting.

With the close of volume 2, Superb remains one the most consistently enjoyable, and best written, books of the Catalyst Prime universe. As it seems volume 3 will be moving the book — to date a universal outlier — closer to the central conflict of the line, I’m excited to see where the combination of A+ teenager characterization and broader universal connection will take Kayla and Jonah.