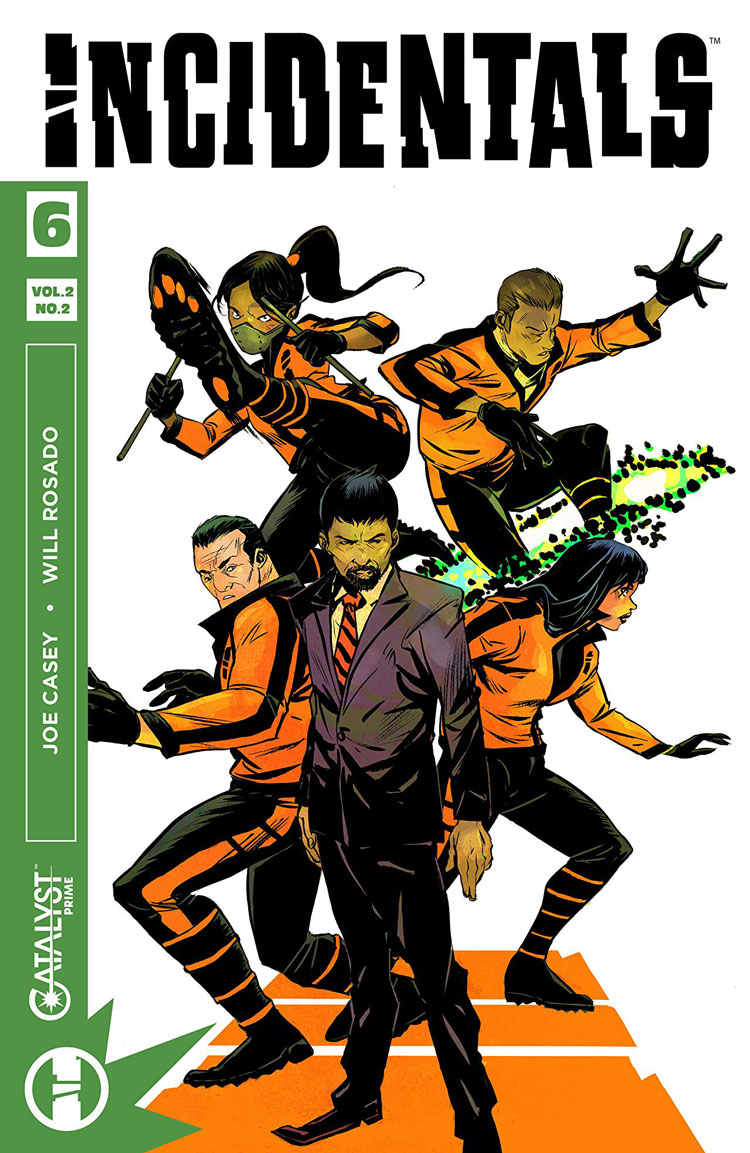 The mission to rescue Alex Winters is in full swing, but it’s becoming clear that there’s more to this visit than meets the eye for Mister Chen. As he comes face-to-face with the foreboding Professor Whisper, will secrets be Chen’s undoing? And who’s popping up next with powers that will ping the Incidentals’ radar?

With issue #6, Casey and Rosado are continuing on their second round match-up between Chen’s Incidentals and the forces that would oppose them (him?), and there’s some improvement for me in the story’s narrative and art style.

In fact, The Incidentals is the first book I’ve noticed to imply that there was more than just a meteor at play in “The Event” — that there was some lifeforms involved, actively or passively, in its arrival on Earth. That’s a pretty interesting development, and paired with an extended look at the mysterious Professor Whisper, I feel like it helps kick the book into high gear after a few issues of impenetrable motivations and confusing narrative.

There’s still a little bit of that, as what appears to be flashbacks in Mister Chen’s mind aren’t very well discerned from the current time confrontation between Chen (in his other form) and the vial of stuff he is reacting to. But overall, especially in the fight scenes featuring Alex, the body language and panel-to-panel pacing is much stronger than in previous issues. Those pages especially as a break-out delight for the book, even if they aren’t moving the narrative terribly along.

There’s still a bit of stiffness in Rosado’s faces, as if the characters’ expressions are from posed mannequins. I’m seeing this primarily in the Detective and Taylor, and less so in the women characters this issue.

By the end of the issue, with the introduction of Sayde and her therapist, I am getting a real sense of warmth and emotion from not just Rosado’s lines, but also Snakebite Cortez’s colors. Combined, they offset the new character’s troubled demeanor with the bright sunlight of the environment, producing a contrast that draws me in and makes me sit with the scene — just in the nick of time as the issue ends.

There’s a ways to go for me to feel like The Incidentals can live up to the promise exhibited by much of the rest of the Catalyst Prime line, but issue #6 did have its moments that glimmer. Here’s hoping more and more of those shine as volume 2 of the series continues.