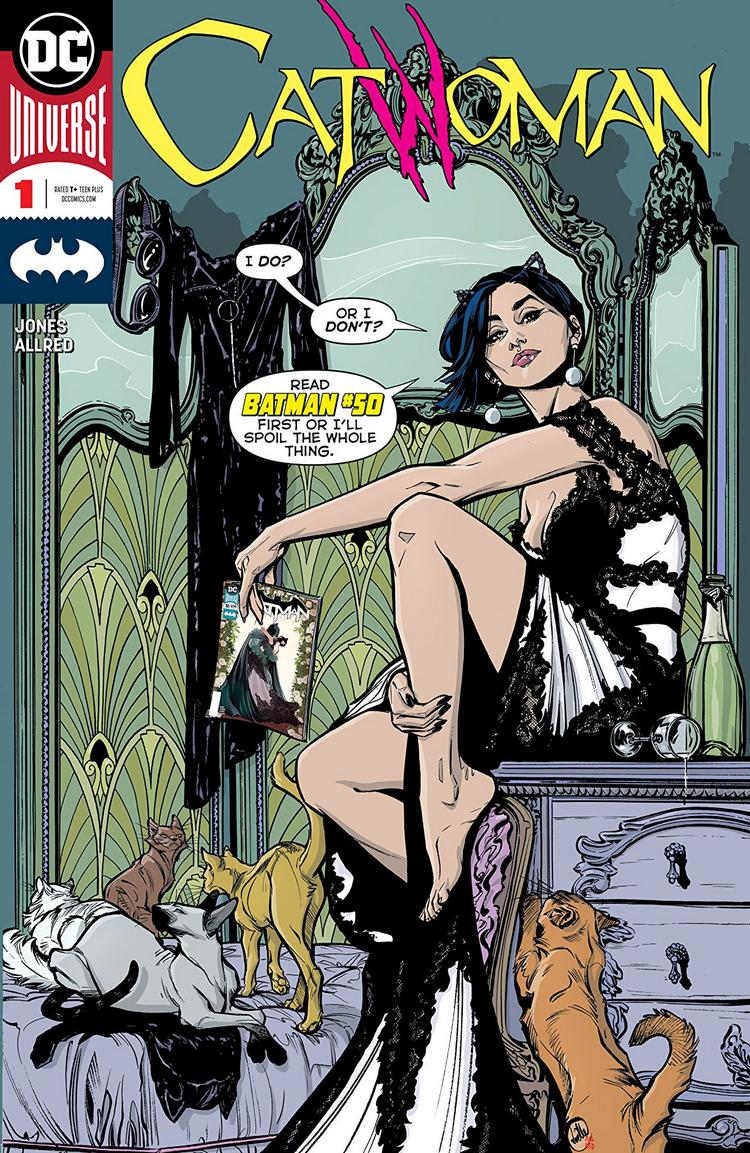 Catwoman finds herself on the run, from the law and herself, as she’s framed for robberies and a murder she didn’t commit in the nation of Villa Hermosa.

SPOILER WARNING FOR BATMAN #50: The cover of this comic promises to spoil Batman #50, and so will this review. The context of this comic simply makes it impossible to discuss without also discussing the conclusion of Batman #50. If you’ve managed to go unspoiled about the contents of Batman #50 and would like to remain so, read none of this review beyond the next sentence: Catwoman #1 is a remarkably well-made, gorgeous first issue that fits a great deal of storytelling and expert craft into twenty-one pages, and is required reading for any fan of superhero comics.

Catwoman #1 opens with Selina on the runs from her problems in Villa Hermosa, where she suffers through her insomnia by gambling in all-night mahjong parlours. Meanwhile, a woman dressed in a Catwoman costume commits a heist and shoots a pursuing cop dead in the course of her escape, evidently at the behest of Villa Hermosa’s First Lady. Pursued by the law, Selina embarks on a quest to clear her name.

Jones crafts this issue expertly, opening by interweaving three different plotlines that will come together by mid-book, with Selina wrapping up an evening’s gambling as her impostor flees police, while the First Lady gives a television interview. We soon learn that the impostor works for the First Lady, while Selina is pulled in by police for the impostor’s crimes. Jones fits a huge amount of storytelling into a relatively scant number of pages, without ever slowing the pacing to dump exposition on the reader. We’re immediately compelled and drawn into Selina’s story, and a last-page revelation leaves us excited for the next issue.

This comic exists, of course, in the wake of Selina leaving Bruce at the altar (on the rooftop?) in Batman #50, for what seem to her to be evidently sensible, indeed heroic and self-sacrificing reasons. Her opening-pages insomnia alludes to the psychological turmoil this has caused her, and we get a scene midway through in which she receives a package sent by Alfred Pennyworth. It’s her costume, along with a terse note. Selina has a mild breakdown over it, which sets the stage for what promises to be the emotional heart of this run: Selina finding the hero within herself when the whole world, including Bruce, sees her as the villain.

Jones’s art is, of course, flawless. Her character studies are immaculate, Selina in particular, who is always classy, mysterious, yet pained. The action is always clear and dynamic, framed to give a strong sense of movement as, to give one example, Selina runs from police and cartwheels between the closing doors of a subway train. Every page demands to be lingered over, in particular the many facial shots of Selina. Allred’s colors blend beautifully with Jones’s linework, with muted pastels and a tendency toward blues and purples that gives the entire work a dreamy, insomniac quality.

Catwoman #1 is a masterpiece first issue, stunning to look at and engaging to read. It’s a great start to a promising new series.