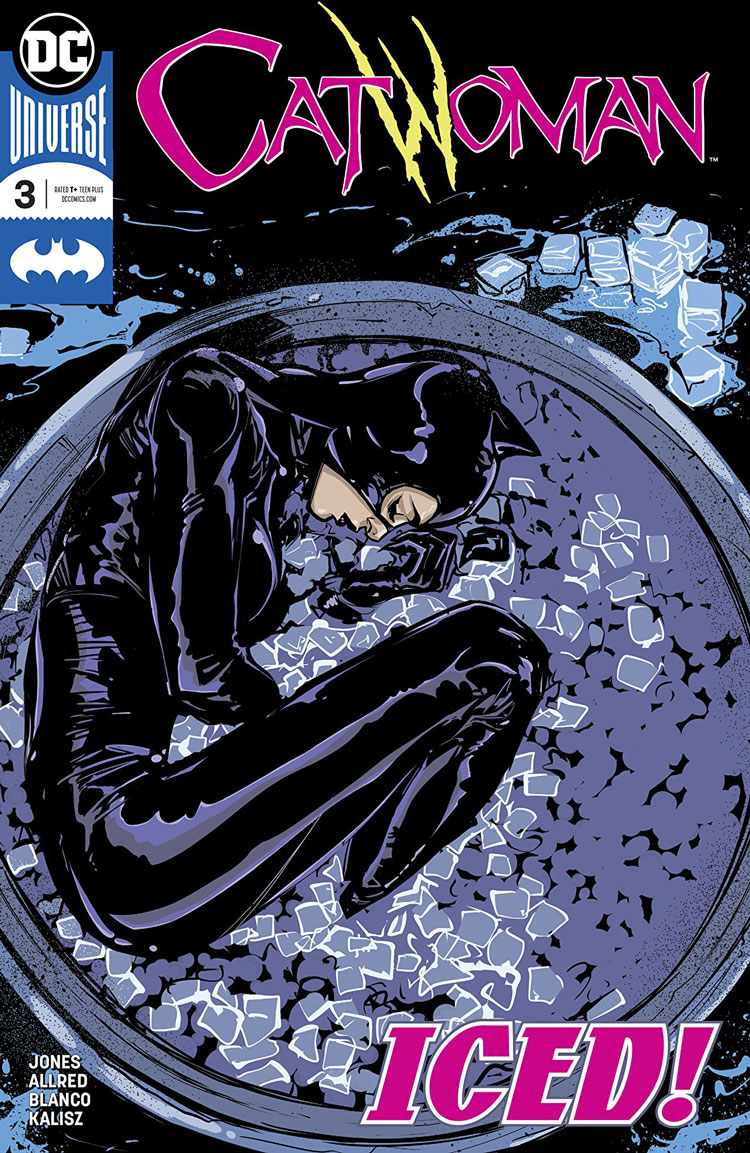 Catwoman vs. The Octogenarians.

Selina has a brief chat with Mr. Creel before she swiftly finds herself on the hood of a car due to who she calls “drugged-up octogenarians.” She has a chance to recover from her injuries, and we have a chance to see Raina tell her story, though everything doesn’t quite line up. As Selina has to brace herself from her injuries, she begins to meet with someone who reveals another startling turn in her story.

Selina is never one to give away her plans immediately, and Joelle Jones plays with this aspect of the character in a way that boosts the story. I like this part of Selina because it means she is able to maintain or quickly shift to her advantage, even though in this story she sees a couple of setbacks that challenge her.

Similar to this story dynamic, Jones includes a vital scene with Raina that works in a likewise fashion but with much more sinister motives. Seeing two layers of the story, in what she is saying versus what actually happens, is both intriguing and a sort of lesson about some of the things that people tell us. The parallel but opposing themes in these threads I think provide useful groundwork to move from for subsequent chapters.

With Jones also on art for most of the issue, I feel like we get to see a lot of nuances in character’s presentations. Jones has the kind of skill to move between different kinds of aesthetics for varying effects, so for the issue to start out more curvilinear and move toward a style that is much more jagged seems to reflect the changing nature of the story. There is also much more detail in people’s faces and bodies toward the end of the issue, heightening the tension as the plot develops.

Laura Allred’s colors remind me of a dark, humid night. These color schemes are fitting, considering they can almost hide what is happening around each character. With muted tones and backgrounds, Allred puts characters under the cloak of night, building a sense of strain throughout the story. Each panel is emotionally laden because of these skills, which touches on the increasing mystery within Selina’s world.

Fernando Blanco and John Kalisz illustrate Raina’s story, and there’s an air of innocence that quickly devolves into malicious machinations. I admire their skill, shown through full figures and faces to shadowed, murky expressions from sickness and scheming. Especially juxtaposed with Jones’ own storytelling, these scenes are almost unsettling, and it takes some time to unpack the fact that what we are reading is far from the character’s truth.

Catwoman #3 is just as cryptic as Selina herself. We are getting to see more and more what she’s up to and what she hopes to accomplish, but it is still hidden behind a shroud. With the inclusion of Raina’s story, we get a new dynamic for what Selina is going to encounter. I like how this creative team comes together, especially as we move from Jones/Allred to Blanco/Kalisz, an effect which slowly transitions between differing truths. I feel like this series is doing Selina right.