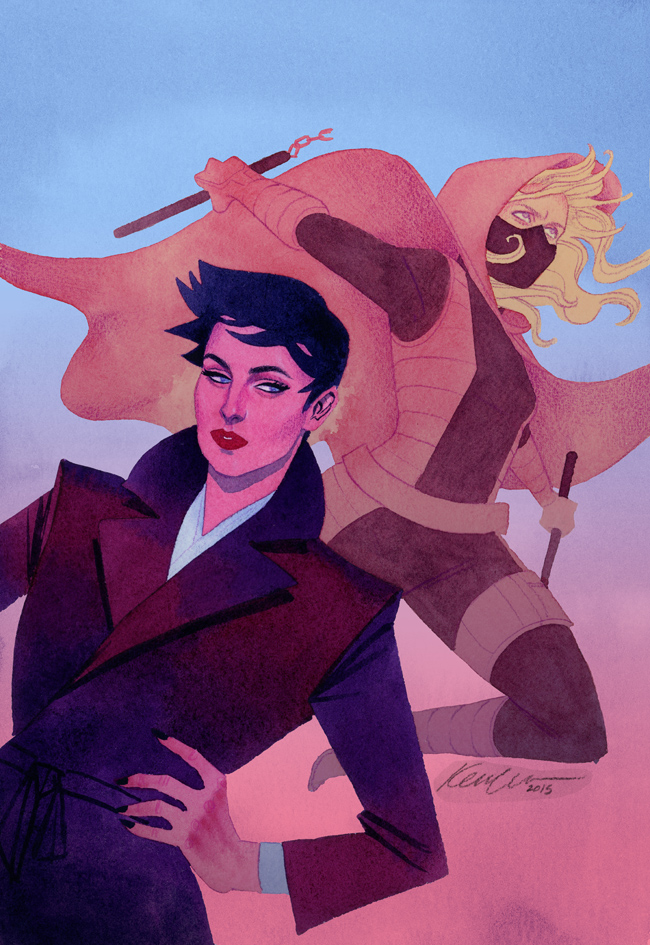 Selina is living a double, triple, quadruple life, and it’s bound to catch up to her sometime. With secret alliances and secret identities piled on left and right, the Catwoman is walking a tricky tightrope. The last thing she needs is another interloper. But that’s what she gets. Enter: the Spoiler.

Genevieve Valentine is weaving a complex web with Selina’s relationships, made only more complicated by the return to the catsuit. After the first arc’s complete 180 on Catwoman’s previous life, issue #42 feels like a rebalancing of the scales. Selina spends as much time as Catwoman as not, but neither life is easy, and both are filled with secrets. It almost takes a scorecard to keep track of who is betraying whom, but that’s almost the point. I’m not sure Selina will be able to keep track much longer, and certainly no one around her knows her full set of motivations.

And at the center of them all is the question of the Batman, but his shadow doesn’t cast itself as deeply as one might think. Selina may seem determined to discover what happened to Bruce, but I wonder how much of it is about closure and not actual loss? Selina is on the precipice of a decision — is she a hero or is she a villain? Is she a mob boss or is she a street vigilante? And ultimately, she can’t be both. And with the Batman, she was all of the above, simultaneously. Only he knew all of her, a situation even Eiko doesn’t yet share.

The women surrounding Selina — Eiko, Antonia, even the Spoiler — all need something from Selina, but also are poised to replace her. It’s another example of how the Catwoman can’t quite decide what she wants. In letting these contenders saddle up to her, take her place but still stand subordinate, Selina doesn’t have to decide for herself what to do. It’s almost as if she’s stacking a deck of people around her that will make her choose. It’s a chess game she’s playing against herself, and there’s no sense of which side will come out victorious, if either.

Messina’s character work in Selina’s civilian movements is exemplary, giving every member of the mob family and the cops strong body work, beautifully executed fashion, and sharp, compelling facial features. Selina without a mask is gorgeous, of course, but she has a hardness as well that could come off as cold. Messina masks the building pressure of Selina’s family ties and emotions with a poker face rivaling the most famous mob bosses in media history, but you can still feel the build-up underneath the denial.

Where things feel a little out of place is, oddly enough, when the Catwoman in in costume. Messina’s action sequences feel a little abrupt, and his bodywork is a little disproportionate in places. The realism of the civilian moments is somewhat undone by Selina’s bowlegged stance or Spoiler’s appendages akimbo. Throughout every scene, however, Loughridge’s color palette paints a city of perpetual night, where blood red skies and dim interior lighting is the norm. It ties the entire issue together and makes for a beautifully moody presentation.

If you loved the first arc of Valentine’s take on Selina as a mob boss, the drama only gets more complicated with issue #42. But if you are a fan of the Catwoman running rooftops in leather, you’re going to have to jump back in, because we’re now seeing the perfect blending of the two. And there’s no question where it will all lead: the inevitable explosion. And I can’t wait.