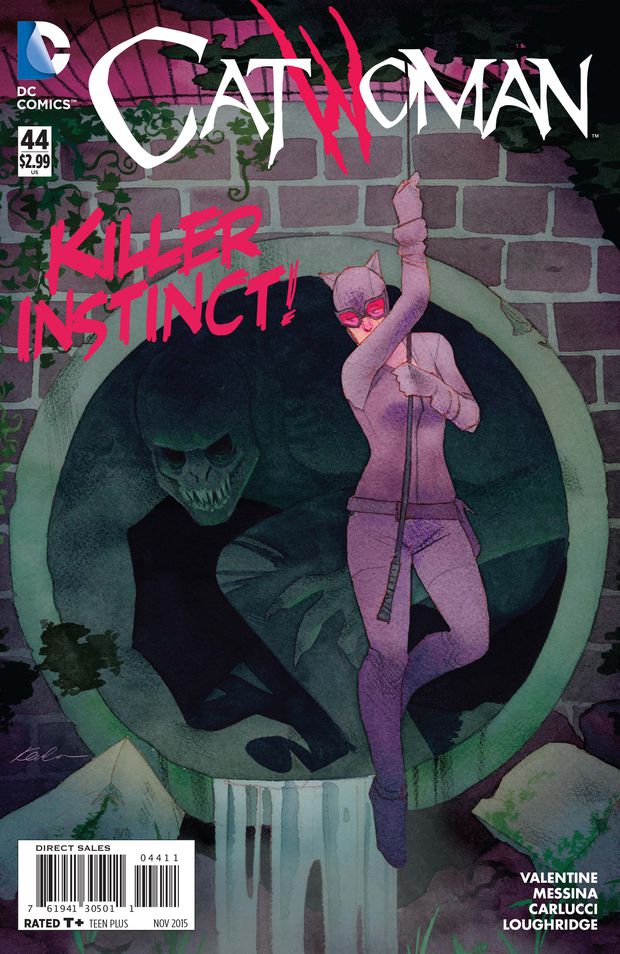 The treacherous path that led Selina Kyle to become the syndicate boss of Gotham City is nearing its end, but not without a few tragedies along the way. Alliances will be compromised. Old friends surface. Love is strained. And family… that means everything and nothing.

If there is a single issue of the current run on Catwoman that encapsulates everything majestic and heartbreaking about Selina’s current place in the world, it’s this one. The narrative strings are beginning to untangle, but only to the saddest conclusions it seems. As someone who loves Selina Kyle, it breaks my heart. But as a reader, I am in awe of the work being done here, and couldn’t be happier to see these pieces fall into place.

Genevieve Valentine is certainly not shying away from action, especially after the events of last issue and its climactic confrontation between Eiko (as Catwoman) and Black Mask. And the climactic moments of this issue, also with the same villain in tow, do not disappoint either. But the crux of this issue, as it has been since Valentine began in issue #35, is the emotional chess being played across every page. This drama is a thousand times more gripping than the latest swing along the rooftops, and gut-wrenching in its silent, breathable moments.

Messina and Valentine, in fact, give us some of the most poignant panels I’ve seen in a comic this year, utilizing the physical space between characters as something so filled with meaning and weight. When Selina reaches out to — but doesn’t touch — Eiko, it’s a moment filled with such love, fear, need, and resistance. That two-panel movement on the bottom of page three says so much about the relationship between these women, how much Selina wants her and this, and how little hope there is for happiness.

It’s that persistent longing for family, love, and honor that defines Selina Kyle, and so a story where she just manages to eke out all three — but will never be able to hold on to any — is beautiful work indeed. Punctuated by a deliberate pacing that never feels rushed (like Selina, who calculates every move like a champion chess player), the story moves across all of the relationships in the title, slowly identifying the soft spot in each. Eiko and her father, Selina and Stephanie, Antonia and Selina — even the brief moments between Selina and Croc — all have their Shakespearian moments. All are doomed to fall apart one way or another. And they all know it.

Messina is delivering one beautiful scene after another, with even dinner conversation feeling deeply dramatic in scale just by his use of shadow and light. All his lines, ably inked by Gaetano Carlucci, are sharp as can be, giving a sense of realism to each character’s expressions and movements. As the last moments of Act 2 in this particular arc, issue #44 could have felt like a dead stop, and if anything, everything feels so much more accelerated and grandiose amid the calm.

A piece of writing and art that is so much stronger than we’ve ever seen with this character, Catwoman #44 has elevated Selina Kyle to Gotham royalty believably — not because she flaunts her power, but because she is so weighted down by it. Valentine has given us a heroine with complicated morality, a deep sense of desire, and an understanding that none of what is seemingly there for the taking can ever truly be hers. It’s the heartbreak of the honorable thief, never achieving that sense of completion that comes with genuine possession. That’s the space this title is occupying, and once again, it leaves me in awe, melancholy, and longing for the next installment.