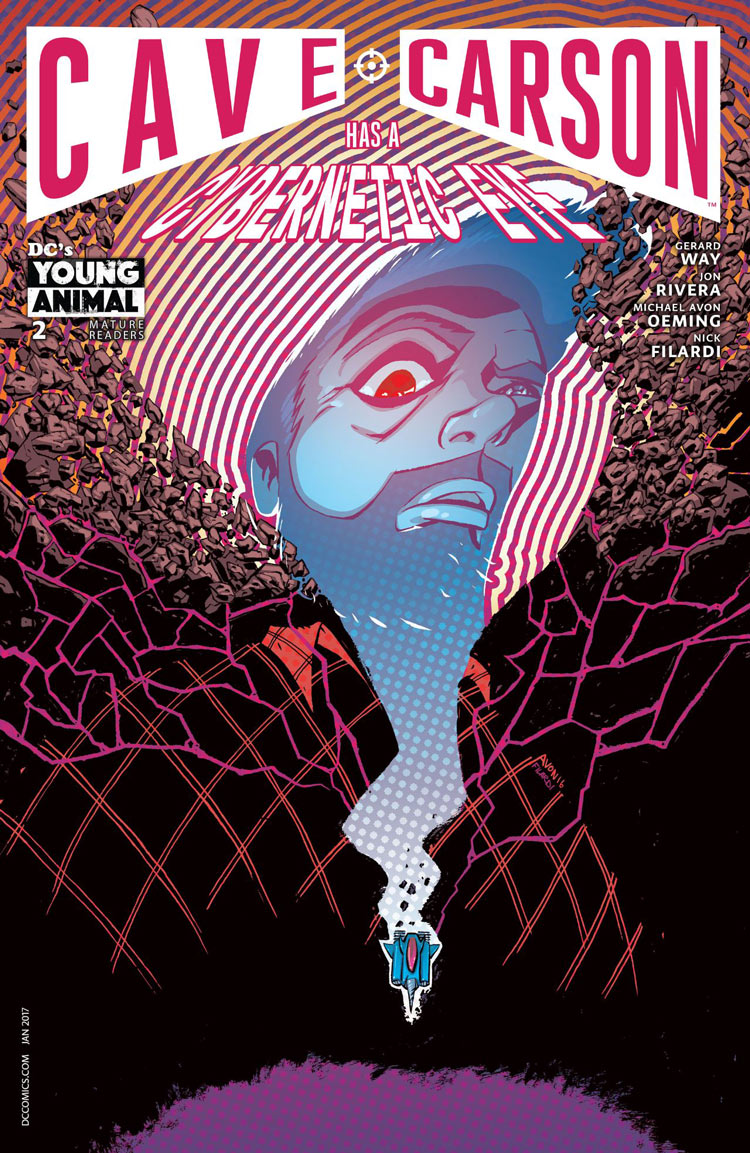 Cave might have tried to bury his past, but it seems his past has come back to haunt him and his daughter in this latest issue of Cave Carson has a Cybernetic Eye.

Way and Rivera deliver the top-notch work I’ve been seeing consistently at DC’s Young Animal Imprint. I love that Way, from what I’ve read of him, has this great knack of creating these well rounded, likable with a bit of quirk characters and he does not disappoint in Cave Carson has Cybernetic Headaches.

Chloe Carson is kickass, awesome in her love of cheesy old movies, and deserves someone a billion times better than Daniel. Gary is a treasure and I hope he makes another cameo at some point. Wild Dog is my favorite, his rapport with Cave is hilarious. While I would say characters have better development than the story itself at the moment, I’m excited to see what happens next!

Oemic’s art is wonderful. There’s this realism within the backgrounds that juxtaposes so well with an almost Invader Zim-esque style to the. While I was a fan of Oemic’s art, I think Filardi’s colors deserve a lot of the credit for making this comic really shine for me. The way Filardi colored the issue creates something of a pop art color kaleidoscope stretched across the canvas of the pages. It feels unique in its insanity, but fits perfectly within the style that the Young Animal Imprint has went with for all of its comics thus far. Seriously, Filardi deserves awards for his coloring if he hasn’t already won some.

There is a scene I’d like to describe, but I’ll only go into a little detail so I don’t spoil you too much. Around the beginning of the issue, a pivotal event in Cave’s life occurs through a flashback. I won’t say what it is, but I will say it’s as if Roy Lichtenstein and Quentin Tarantino collaborated on a single splash page. There’s something simplistic about it, yet absurdly violent with the amount of blood flying out of a certain wound. The contortion of the body, the angle of the flashlight that has fallen to the ground, it’s all perfect in its morbid disarray.

I’m a fan of the Young Animal Imprint, so it probably doesn’t come as a surprise when I say I recommend this comic. Though the story hasn’t exactly caught up with the characters, I think the writers have time to make something fantastic since it’s only the second issue. Cave Carson has a Cybernetic Eye is a fascinating series and is worth your time.